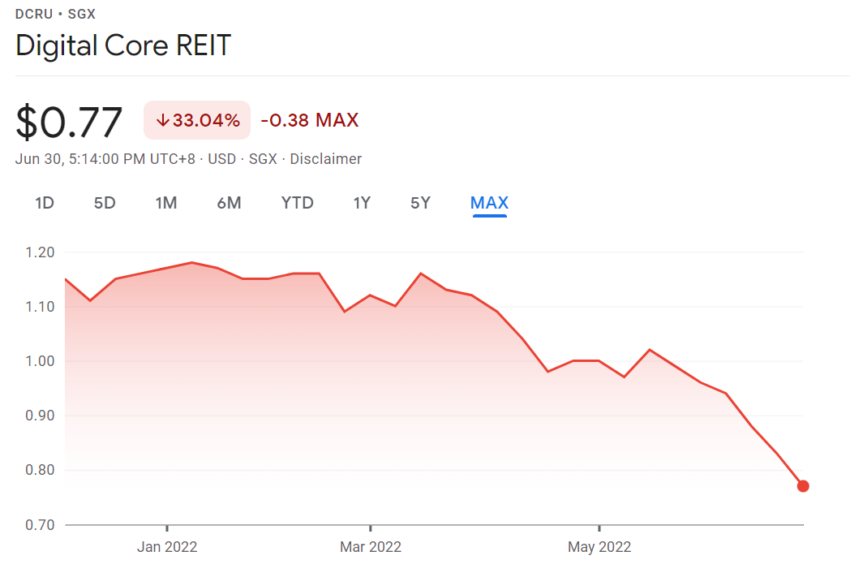 Digital Core REIT (SGX: DCRU) has undergone a pretty rough patch in the past few months.

Since hitting the peak back in March at a price of $1.16, the share price has gone one way down languishing below the IPO price at $0.77.

This means everyone who’s bought into this REIT are staring at a loss, including those who bought them during the IPO (myself included).

Is this the right time to accumulate or is it time to sell and run away from this REIT?

Let’s first take a step back and remind ourselves what we as investors have got into with this REIT.

This is a REIT that is:

This is a REIT that ticks many of the boxes an investor would like to see in his or her investment portfolio.

Even the most recent first quarter results show resilient earnings as both topline NPI and Distributional income attributed to shareholders did better than what was projected during IPO.

So what has gone wrong from here?

Why is the share down as much as 33% since hitting the peak just back a couple of months ago?

Let’s take a look at some of the possible reasons and possibilities.

The first is the announcement that Digital Core REIT’s fifth largest customer – a privately held IT service provider occupying 2.7 MW of the capacity in Toronto – filed for bankruptcy protection back in April.

Although it was not explicitly stated in the announcement which particular customer is this, it is assumed to be one of IT service provider by the name of SunGard AS which takes a meaningful portion of the overall rent for DigiCore REIT.

Even though the customer has filed for bankruptcy protection, the customer remained current on its rental obligations through the month of April. In keeping with with Digital Realty’s continued commitment to the REIT, it has reached an agreement in principle to guarantee the rental income stream in the event of a near term cash flow shortfall.

While the REIT might be lowly geared at only 26%, the debt profile is based on 50% fixed and the other 50% on floating rate. Given that the entire debt is in USD and interest rate is increasing, the cost of debt might increase from here onwards, although we would argue that this is likely the case for most of the REIT with gearing not on fixed rate.

The third reason we might think of could have something to do with its sponsor.

As we all know, DigiCore REIT was listed as a perpetual long term vehicle for Digital Realty to divest and recycle its assets.

While having a pipeline serves as a good long term platform for the REIT to organically grow over time, there might be misalignment in interests over time especially if the assets are in longer term decline. We have seen this in the past with some of the other REIT with sponsors that divest to them poor lousy assets.

With the likes of blue chip companies like Microsoft, Google, Facebook planning to build their own data centres rather than moving in to existing, the type of profile for these data centres might shift to lower quality.

It depends on how you want to look at this play.

If you have bought this at the peak, then your breakeven runway is much longer. Your cost of yield is also lower.

The stock has been in a strong downward movement since hitting the peak in March, and this might also have to do with the expiry of the lock-up period where institutional investors are free to divest their units into the market.

If you think 5.4%-6% is a decent enough return for you long term, then you might want to consider accumulating this.

Some of the issues may be permanent but some may be just temporary in nature.

7 thoughts on “Digital Core REIT (SGX: DCRU) Has Crashed 33% Since Hitting The Peak Just Months Ago. Is It Time To Accumulate or Run?”