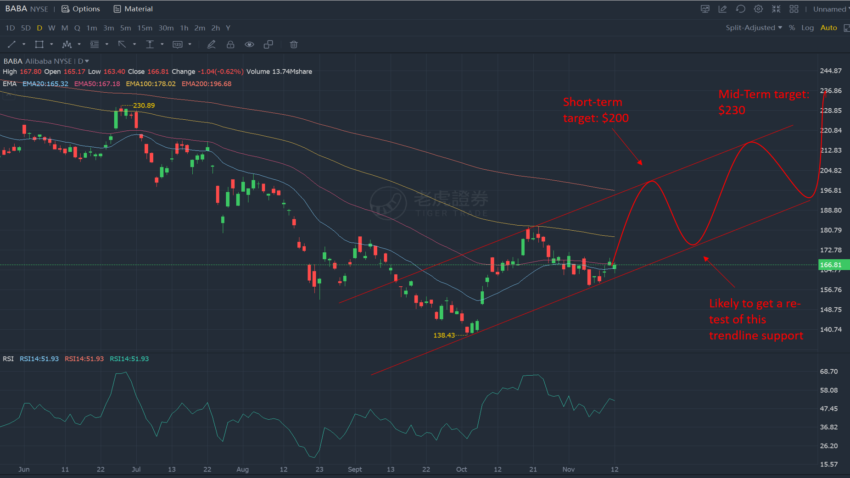 As most readers already know, Alibaba remained my largest position to date in the portfolio with over 30% weightage.

Over the past couple of months, I’ve gone through many articles on my positions for Chinese tech companies so I’ll go through a quick one this time of what I am seeing in the Baba’s chart.

Do note that Baba is expected to announce an earning results next week on the 18th November, so I’ll be taking a close look of their development fundamentally.

For this article, I’ll be doing a technical analysis to see what might be in store over the next couple of weeks and months and how I derived at my potential short term target of $200 and mid term target of $230.

I like how Baba closed this week with a relatively strong buying support above its EMA20.

If you look at the chart pattern closely over the last 2-3 months, you would note that the stock hits a low of $138 somewhere near the end of October and then subsequently went up to test the EMA100 and failed to breakout from there.

The stock went back down but managed to float around the previous inverse shoulder support, thereby forming somewhat an inverse head and shoulder pattern.

For those who are not familiar with the head and shoulder pattern, it is essentially one of the important signals for a reversal trend in the making and if this proves to be correct, then we are about to set the start of the next bull leg, which might come as early as earnings this week.

Having said that, it does not mean that the stock will move one way direction as there will continue to be buying and selling throughout daily and my guess is even if it moves up to re-test the EMA100 once again, it might re-test that inverse shoulder support at least once again.

Let me explain why in the next chart.

Let’s rewind ourselves of what happened back then during the 2018-2019 period.

Back then, China was also introducing some regulatory moves (although not as aggressive as they are now in 2021) and there were also the US-China tension during the infamous Trump’s days.

During the COVIC pandemic back in early 2020, we had another similar inverse head and shoulder pattern, and another re-test of the inverse shoulder before resuming the strong upward move for most technology companies.

If this pattern continues to hold this time, this means that we might get a start to the new uptrend with immediate short term target at the upper line of the trendline at $200 which might come as early as next few weeks.

The mid-term target might come in slightly longer, which I am expecting could be somewhere between Q1-Q2 of 2022, where it would resume the test of the mid-term resistance of $230. Anything beyond that, we are looking at the start of the new longer term uptrend (though after this it will very much dependent on business fundamentals and development too).

I understand that most investors who are in the same shoe find it frustrating to find their portfolio bleeding due to the regulatory crackdown especially this year.

In a response to avoid such calamity after such incident happened, most would avoid the sector and choose to move on to sectors and industries which might be the “hot” on the cards. But I caution similar calamities could happen from a valuation standpoint and investors could end up selling low and buying high each time.

Meanwhile, do be cautious and remember to exercise due diligence when buying.