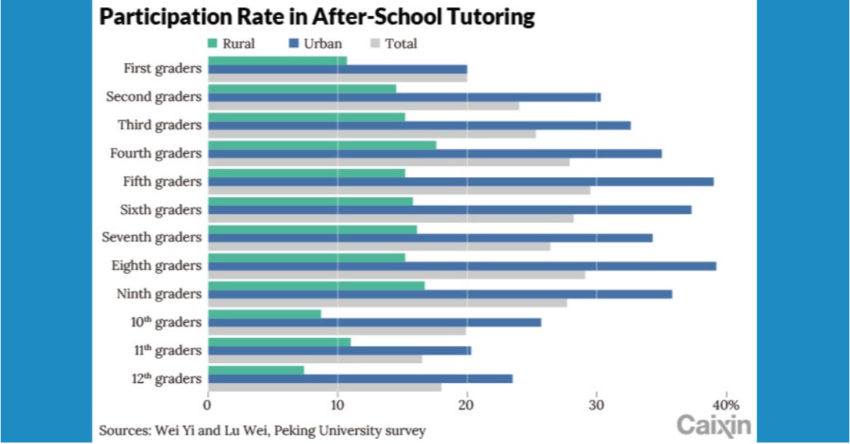 Since the last round of regulatory crackdown for the tutoring industry, the Ministry of Education came up with a set of rules that have disallowed for profit companies to take advantage of the school core curriculum in particular for the 1st to 12th school graders on the core subject curriculum that every child in China has to go through.

The details of the published contents were:

When the news was announced, the entire education market capitulated as the market sees this as the end of the road for most private educators. More than $100 billion was wiped off the market value of three US-traded Chinese education giants – TAL Education Group, New Oriental Education & Technology Group and Gaotu Techedu Inc.

If you have seen my previous analysis on New Oriental Education ($EDU), you would know that based on the financial records, the revenues earned from the K-12 AST, Test Preparation and other courses accounted for the majority of their revenues at 82.7%, 84.2% and 85% respectively for the year 2018-2020.

They did not exactly provide the breakdown specifically for the K-12 AST, but we would think that it’s going to be between 60-70% of those revenues.

Since then, private companies have taken immediate next steps to reduce overhead and pivot to the new hybrid model business.

Under the new hybrid business model, it would mean providing tutoring in school subjects from 6.30 to 9pm on weekdays while all round education on weekends and holidays – such as training in sports, music, arts and foreign language.

Just take a look at the demand in the weekend tutoring queues for training classes outside of school curriculum posted by a poster who lived in China. In his post, he mentioned that parents are scared to allow their children to spend their new free time on “Tang Ping”, hence they are replacing them similarly with classes that can boost their overall holistic skills in their children.

Classes such as swimming, chess (you need tuition for this??), dance, arts and technology are very popular and fully booked well into the future.

The poster likened the transition and pivoting to eating in the restaurant. If you offer free rice or side dish or beer in your menu, people are still going to come and order your other dishes in the menu. At the end of the day, that new free time which the 1st to 12th graders will have will still be filled with new activities and skills.

China is China – You can never run out of opportunities.

Just a week ago, the Beijing Municipal Education Commission announced the whitelist of Beijing’s first batch of out of school training institutions – which you can view it here if you can read here in Chinese (not sure if you can translate it into English).

You can view all the 152 list of training institutions inside the link I gave earlier.

This is in accordance with the relevant requirements of fund supervision, school license, epidemic prevention and control and school running conduct – which the Ministry has approved for restoration of the institution list.

This is a lot better news for most institutions than the generalization earlier of all “non-profit tutoring” which indicate zero profits.

In the whitelist guidelines, these institutions that have been approved inside the list can still charge a pricing but with a cap guideline such as not having more than 10%, one-time fee which shall not exceed 3 months or 60 hours and carried out according to the cycle and class time fee.

The end goal is to regulate the pricing for compulsory education but still gives enough room for these institutions to operate with a private profits in mind, albeit with likely lower growth (and not zero). This is only Beijing so obviously we’ll have more institutions later getting approval in multiple different states (do note they are trying out this in Beijing first as lead runner).

The regulatory crackdown on tutoring focuses predominantly on compulsory education, but the market seems to have discounted the majority of the education tech sector.

Skills outside of classroom activities are still highly sought and vocational training that allow its citizens to pick up additional skills is likely going to improve the overall productivity of the nation.

Private educators such as Gaotu has pivoted to vocational training while companies such as China East Education has already anchored its core in skills such as culinary, automotive and technology.

If the longer term goal of the CCP is to raise the awareness and productivity of its citizens, especially from the poverty and rural area, then these skills will be beneficial and align with their long term goal.

In fact, right from 2019, the government has been encouraging vocational training skills and have supported this as part of their longer term campaign.

I think there are some good opportunities around if you are looking within this sector.

Most of the worst news regarding the non-profit have been priced in and companies are likely already pivoting to the new business and opportunities abound in the new world.

But these companies are still beaten down recently due to sentiments and there are even companies that are unfairly beaten as a collateral even as they are mostly not too related.

While this may take some time to transition, we can expect a quick pick up given the Chinese usual style of having it done productively and we may see an emerging and stronger pivot towards the new norm and productivity in China’s next generation.