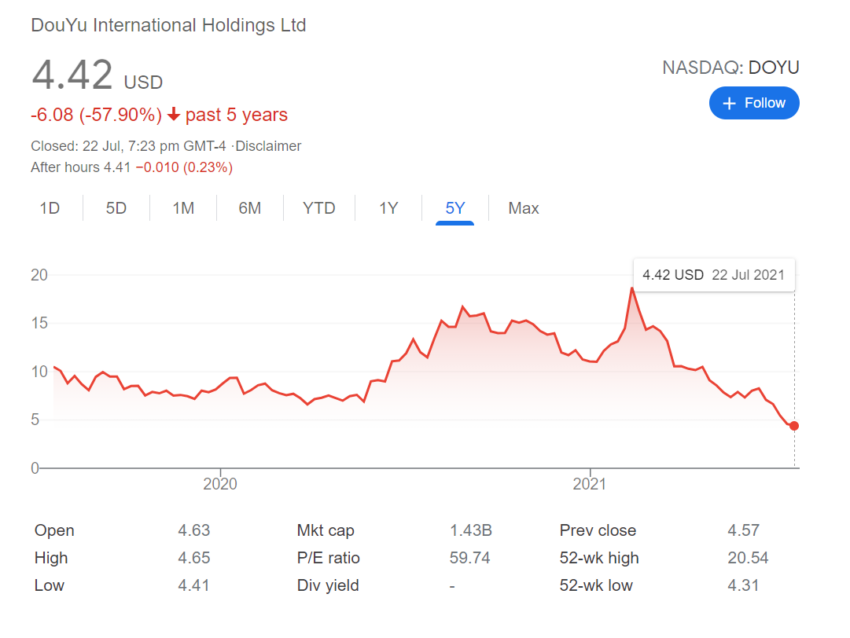 Just last month, I wrote an investment thesis article about HUYA Inc. which you can find the link here if you have not read them yet.

I’d recommend that you read them first before you continue to get a better understanding of the investment thesis I have put up there.

As both companies are in the same competitive space in the gaming streaming and esports segment, I shall not repeat the same industry thesis explanation I have done in the last article.

There are a few development updates since then which I will highlight in this article, so stay tuned if you are still interested to find out.

Douyu International Holdings Ltd (Nasdaq: DOYU) – is one of the largest game-centric live streaming platform in China and a pioneer in the eSports value chain.

As one of the first game-centric live streaming platforms to make the foray into esports, together with its close competitor and rival, HUYA Inc., both companies have the competitive advantage in capturing the early first mover advantage when it comes to this space.

In fact, both Douyu and Huya combined have captured more than 80% market share for the overall monthly active users in this space – which is mostly part of the reason for the failed merger by the anti-regulatory task force which I will explain more in detail later on.

Failed Merger With Huya A Step Forward Two Steps Back

The idea of a proposed plan merger back then was to rationalize the operating efficiencies of both companies when it comes to running a business and both companies can come together to strategize and capture an even stronger market share for the future.

After all, both companies controlling shareholders are held by one same parent company, which in Tencent Ltd.

As a controlling entity, you would not want to see both your children fighting over the same pie when you can get together and form a larger giant in the making.

Unfortunately, that was not going to happen, as the tightly monitored anti-regulatory task force is clamping down on each company very closely again, and both companies did not meet the required ask to complete the merger.

Since the announcement of the failed merger was made, Douyu’s share price plummeted to an all-time-low – so low that it has become ridiculous from a deep value investor’s point of view. I will explain about the valuation part later on but note that the company has currently little to no catalyst from an overall bearish sentiment view.

If we take a look at the proposed merger deal more closely, you can see that it favors Douyu more than Huya, which is also the reason why when the merger failed then Douyu was more impacted than Huya.

According to the proposed merger, Douyu will receive 0.730 American Depository Shares (ADRs) of Huya, representing a premium of 34.5% to Douyu’s last close price of $14 (before the merger announcement), valuing the company at nearly US$6 billion.

The deal of the merger is as such that Huya was going to pay as much as $18.8 for each Douyu shares back then which is well, very high if we look today on hindsight.

For information, Douyu is today trading at $4.42 with a market cap of just US$1.43 billion. That is just 1/4 of what Huya was willing to pay for the merger just 6 months ago!

As with most decent Chinese companies that we are looking these days, valuation for Douyu Inc. is undemanding.

To illustrate how cheap the company is, I will show you the latest balance sheet the company has with the Q1 results they announced a couple of months back (Q2 results is coming next month but we should not expect much movement from the balance sheet since they didn’t announce any major acquisitions or spending).

Highlighted in yellow for clearer reference, the amount of cash equivalent including bank deposits are:

In total, they have a sum amounting to US$ 1.156 billion, and have little to no debt borrowings on their book. Do note that earlier their current market cap today is at US$ 1.43 billion, so this makes up 81% of the overall market cap.

If we translate this to the ADS/share, that would be worth $3.6 / share.

If we further include the investments portion in their book, then this would increase the worth to $3.8 / share or 86% of the overall market share.

Subtracting the net cash portion from the market cap, this means that the company’s enterprise value for its portion of what the business is worth (MAU at 191m active users and growing) at is only worth US$200m!

Using full year FY2020 as a guide, the company is generating an annual net revenue of US$1.47b.

Enough of valuation for now, let’s take a look at what are some of the risks the company is facing today apart from the anti-regulatory rules which every Chinese dominant companies are facing today.

There are a few companies today that are entering into the gaming and esports market to provide more competition to the existing leaders of the market.

While there are a lot of companies that are offering online mobile gaming or streaming as a value added service (little threat), one behemoth company like Bilibili has forayed into the esports gaming segment through its subsidiary entity, Bilibili gaming.

Bilibili gaming, established in 2017, has received its first round of funding back in January for an amount of US$28 million. The company has organized and managed tournaments, like the esports Shanghai Masters back in 2019, spending a whooping $120 million to purchase the exclusive broadcasting rights to the League of Legends tournaments.

Sources mentioned that the company is only currently 3rd behind Huya and Douyu, having a market share of between 10-15% and will still be a threat to the two leading companies.

The second risk is a growth slowdown in the overall esports segment compared to historical.

At some point, most companies will experience this – a slowdown in the overall organic segment of their business and they have to think about bringing in inorganic growth through acquisitions or another revenue segment division to monetize its monthly active base.

The esports market was undergoing a very strong growth profile from 2016 to 2020 but it has slowed down since as it may have reached a plateau stage where growth is no longer as huge as compared to previously.

For example, while both Huya and Douyu were experiencing triple digit growth in the early phase of their business due to the boom of the esports segment, they are now slowing down on the growth to just mid 20s and sub 10s on their Monthly Active Users.

This makes growth coming from monetizing the business even much harder than before when you have a base that is starting to mature and like I previously mentioned in my Huya article, the company has got to start looking for an advertising model in order to start churning revenue and earnings. Currently, the model is relying too heavily on virtual gifting which can be a core but hard to scale thereafter.

The company looks very cheap and like most value investors, I am tempted to go in as well and put some money in.

However, it is prudent to look further into the upcoming quarterly results to see if they managed to further monetized their growth and what the company plans are post failed merger now.

As I am currently already vested in Huya for now, I will not be putting money yet into Douyu but will closely monitor the development for both companies to see any slip breakage opportunity I might find when I see them.

3 thoughts on “DouYu International Holdings Ltd (Nasdaq: DOYU) – Trading Close to Its Net Cash Value With An Enterprise Value of Only $200m”