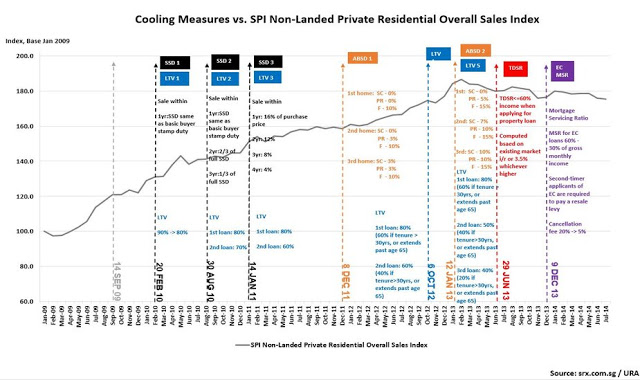 “Homes for every generation” – is their main slogan of the company.

Like any other property developer, Bukit Sembawang is very much subject to regulatory rules and the various cooling measures the government has introduced in the past few years from 2009 to 2018 in order to relieve the heating market.

You can see that despite the various cooling measures that were being introduced, the overall trend line of the non-landed private residential continued to increase in the earlier years where the market continued to be heated.

It was not until in 2013 when the TDSR was introduced that the market continued to slow down as it becomes increasingly difficult to qualify and buy a second housing property if you still have an existing loan with your bank on your current property.

The property market slowed down during the interim before they resume their upward trend from 2017 onwards.

The most recently announced increase in Buyer’s stamp duty in 2018 also impacted Bukit Sembawang which they had to pay a one-off $31.8m in Q318 for their outstanding units in Paterson.

They were recently granted written approval to convert the 86 units in Paterson Collection into 112 units of service apartments and in Q318 have reclassified the asset from development properties into PPE so that they are no longer subject to the extension premiums under the QC ruling.

Despite the various cooling measures introduced over the years, you can see that they are able to maintain the level of margins, with only a slight dip between 2014 and 2016.

This shows how resilient the market is, especially in relation to the higher luxury segment.

They didn’t have any other SG&A costs apart from their own staff and management, so their business is pretty much how much they can sell their properties for.

A quick first glance at their free cash flow yield and it might put you at interest because of its high fcf yield at play.

You can see that their spending on capex has been rather low in recent years so almost everything that they are earning from their operative cashflow goes back to their cash line.

However, that is not a true reflective way of looking at this.

The capex portion involves any spending on their PPE, which if you see its low it means for a long time they didn’t spend on buying any land bank. This could be a problem once their projects ran out some day.

However, what we didn’t see here (but will see later below) is that they’ve been spending on enblocs on development properties which falls under the category of Operating Cashflow. 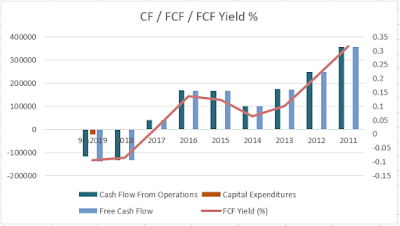 They have been quite generous with their payout in recent years, paying a high payout ratio and total dividends of 33 cents for the last 3 years (4 cents final and 29 cents special).

This is most likely due to a lack of growth opportunities in the market and so they are returning back cash to the shareholders. This should not be seen as recurring so you should not expect year on year getting the 33 cents deal.

Still, I think this is a good practice, at least we know they are not hoarding the cash pile unnecessarily.

33 cents of dividends will require them $85m, so at 40% net margins this require them to sell around $212m worth of gross sales.

In 2018 you start seeing them paring down the payout, this is because they started bidding the projects on Katong Park Towers and Makeway View, which they were awarded.

The winning tender bid wasn’t cheap but I am guessing they smell opportunity for them in the market again. 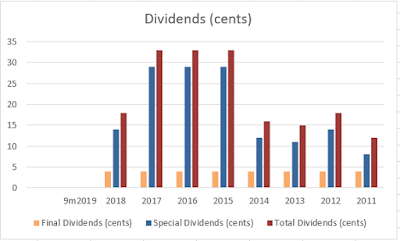 This is a developer company that is known for not using leverage to buy their properties and have zero borrowings in their books.

And it’s quite rare these days because we always associate property with leverage and it makes sense to use some borrowings because of the deal size and also a way to boost the ROE (given a low ROA rate on development properties).

But I guess Bukit Sembawang didn’t see it as necessary.

However, in 2019, they started using borrowings, primarily because they won two tender enbloc deals for Katong Park Towers for $345m and Makeway Views for $168 and didn’t have their cashflow turn fast enough as they have some accrued contract receivables on hand so they went on the borrowings to tide it down in the interim.

Investment properties are very minimal in their books and over the years there is some depreciation costs being run down so the premium spread between the current fair value and what they have on their books currently is around $17m, which translates to about 6.5 cents they can add to the NAV if they revalued or sell.

IFRS 15
IFRS 15 is a reporting framework that is made effective from 1 January 2018 which companies are required to adopt to recognize their revenue.
Although broadly it seems like they are just changing the timing of the revenue and costs, IFRS 15 shifts revenue recognition to a control model.
Under this framework, Bukit Sembawang still recognizes revenue from sale of development properties and land cost of the sold units using the percentage of completion method.
But the construction costs incurred for the sold units are no longer recognized using the percentage of completion method. Instead, the costs are recognized as and when they are incurred to the extent of the units sold.
What this difference makes is that if the market gets heated, and most of the units are sold and cost incurred are ahead of the completion, then that will get reflected first in the book. If the units are sold only after the housing is completed, then it will not make a difference to how they were being reported in the past.
RNAV
When we talk about buying in relation to the valuations on a property company, we never fail to bring up how much its share price is trading in relation to their RNAV.
The NAV stated in their annual report is not a true reflection of their asset value as most of the development costs and lands are not revalued to the market.
Buying a company less than what they are worth for has been touted for years as one of the key to value investing but we all know that all developers today in the market are trading at a steep discount to their RNAV so there are no more competitive advantage in trying to get a developer company at a discount.

Maybank came up with this guide of what they think their RNAV is which I thought is a good indicators for reference.

For instance, when they bought Makeway View for $168m in Mar 2018 at around $1,600 psf in the Newton district area, they are assuming that they can build up a higher number of units with newer buildings in the next 4-5 years. Tearing down the current place takes 2 years and rebuilding it again will take another 2 years. In terms of costs, tearing down and construction costs will probably add another $400 to $500 psf easily so that means in order to sell at a margins they are currently selling, they would have priced it at around $2,600 psf in 4 to 5 years time.

This means the RNAV they are putting up is for some distance in the future and it doesn’t make sense to place that value at today’s current situation. It might skew the way investors look at things when they use the Price to RNAV when they buy today.

The same goes for other development like Katong Park Towers which they placed at $2,200 psf assumptions.


There are a few things here that we need to watch out.

First, the RNAV is most likely a value that is more realistic some time in the future so using it as an indicator to buy today is theoretically incorrect because they are not being discounted back to today’s present value.

The RNAV at today’s present value is likely to be lower.

Second, the nature of the property market is such that it is very regulatory and macro sensitive event, so it can change the perspective of the true value of the assets very quickly in the RNAV’s calculation.
Third, the nature of their business is also very project based, which means they would have to fight and tender for potential land banks (which is scarce these days) or enbloc deals from their fellow competitors.
We talk a lot as investors how difficult it is to time the market but the nature of the business for Bukit Sembawang itself is timing the market.
If they wait on the sidelines for the best available deals they may ended up being priced away from what they are doing and they may run out of projects to deal with at some point.
The recurring acquisitions on projects they have to time and tender is a hard one to get it right in the face of uncertainties and competitions.
On the good side, the management are all very experienced folks in this industry and they know the environment much better than we do. So if you put your money down you are hoping the management will continue their good work and don’t make drastic mistakes.

They have also shown that they are willing to return excess cash back to shareholders if they don’t need them so that’s a good sign that they are not hoarding the cash unnecessarily.

Overall, I think given the nature of the business, it’s easier to be on the sidelines and watch the cashflow and then enter when you think they are likely to dish out good special dividends.

For a longer term play, the risk of holding is still imminent given the uncertainties in the sector out there.

8 thoughts on “Bukit Sembawang Estates Limited – Would You Buy When They Are Trading At Such A Steep Discount?”