The new year has started with its first green week and the general sense you get from the market is the people on the street are more optimistic, building up a strong end to 2017.
Sir John Templeton once gave a great quote that says “Bull market is born on pessimism, grow on skepticism, mature on optimism, and die in euphoria”.
If you’d ask me which stage do I think the market is right now, I would think that we are at the optimism stage, which is usually accompanied by higher market valuation, higher interest rate, tightening of the monetary policy, increased spending, etc etc. The general consensus is that we are not at the dire stage of pessimism.
The 2D diagram below would probably give an easier visual of the general sentiments of where the maximum risk is during certain stages of the financial market.

If you are someone who is a beginner in the stock market, the chances are you would enter at the point of the optimism, excitement or euphoria because it is simply just too comfortable about listening to all the positive news and outlook out there. From a psychology point of view, it is comforting to do herd investing and follow what everyone is doing, without giving much thoughts about the downside you might be facing.
On the other hand, there are several people who falls under the category of FOMO and they become disillusioned by the fact that the friends and neighbors beside them are getting richer each day, upgrading gadgets, going expensive holiday, and spending more on items. These people waited and waited and ultimately surrendered by the temptation to join in, unconsciously not knowing that psychologically they are not ready and timing wise they are last to the party.
The diagram below gives a view from a 3 dimensional matrices which is simple but more in-depth. 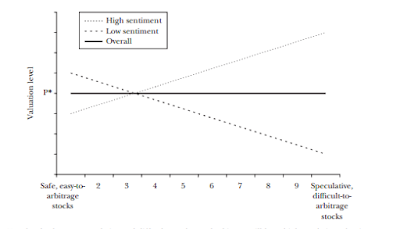 It summarizes this perspective into a simple, unified view of the effects of sentiments on different types of stocks and their valuation level.
The x-axis shows the different types of stocks, from the safest to the most speculative. I think it was determined according to the beta.
The y-axis shows the valuation metrics.
The different dotted lines show the hypothesis in the swing in sentiments during certain market conditions for different beta stocks.
The empirical theory shows that people tend to have high sentiment for low beta stocks with low valuation level and high beta stocks with high valuation level. The argument shows the more speculative the asset class is, the greater the valuation, the easier the push up and thus herd investing.
Sentiments are higher but may not necessarily wiser.
In the risk based asset pricing models, CAPM, a stock’s expected return depends on the risk exposure measured by beta, and the risk premium, which can be measured by the sentiments level on the expected return on the stock market as a whole. Interestingly, when sentiment is high, speculative high beta stocks have a lower returns on average over time.
Ben Carlson did a nice backtest theory on the US market where it shows the average annual returns on investors who invested at the high market valuation high sentiments level across from 1945 until 2017.

The idea is that if you have invested in lower valuations, the chances of you making a higher returns will be more likely in the future. This rhymes with the idea that money is made when you are buying, not selling and that’s because when you pay for something that is expensive, the return on investment will be a lot lower if we average that out.
The converse is also true.
If you are buying at a low valuation, then you have more protection in the form of margin of safety that any doomsday scenario will be covered by your cheaper entry. Hence, the likelihood of a higher ROI is more likely to happen.

While the market can go higher with each optimism, it really depends on how ready we are mentally and psychologically to face the battle when it comes someday.
The general sentiments of the market is definitely high, and people are expecting a higher return. It might just come to bite back someday, not when the least you expect it.
Thanks for reading.
If you like our articles, you may follow our Facebook Page here.