FCT is one of the Reits I am more familiar with.
I’ve been wanting to add them to my existing position but couldn’t get any solid entry points in recent times. The last addition was back in December when I added 7,000 shares at a price of $1.81. Last Friday, I managed to add FCT to my existing position at a price of $1.95 for 5,000 shares. This was an average up decision.
My last write-up on the company was 4 months ago when I attended their AGM for FY15 so I would not be repeating much on the operational updates on the company.

The company announced their Q2 FY16 results recently so there are just two things I am particularly on the look out for.
The first is on the ongoing AEI they are doing with Northpoint.
Occupancy for the premise has dropped to 81.7% and is expected to drop to the low 70-ish as they continue to progress with their phase 1 and 2 enhancement.
In Phase 1, which will take place from March to October 2016, will see a reconfiguration of the retail space, relocation of the food court at basement 2 and upgrading of the passenger lift, ceiling, toilets, etc.
In Phase 2, which will take place from January to September 2017, will see an integration with the upcoming retail mall Northpoint City at all levels from B2-L3. This is a big one because the Northpoint residence and retail mall will commence operations in 2018, so it is vital that there are synergies and integration in both retail malls rather than competition, since they are owned by the same parent company.
The management cited minor disruption to the tenant as they had to be moved, but this will no doubt has an impact to earnings and DPU at the end of the day, for the short term until it is completed. AEI Capex is budgeted at $60m and to be funded by borrowings and internal resource, so we should see gearing goes up over time. Upon completion, a rough estimate of 9% rental reversion is expected from the mall. If you see their track record since inception, you can see how they have managed to edge out positive rental reversion through all economic cycle up or down. That is impressive management. Long term investors can have comfort knowing that the tree will reap fruits when it’s ready.

The other thing that I am looking out on their development is their debt maturity, which currently stands at 1.91 years.
I won’t be too worried on this since I’m pretty sure they are able to obtain a term loan with their credit rating, albeit this will probably come at a higher interest cost than before. Still, if you look across all the other retails reits I’ve listed below, FCT has the lowest interest costs so far. So they will probably go up but will do just fine with it. 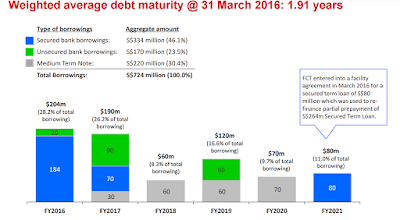 Final Thoughts
The current share price does not offer a compelling opportunity to go in since the company will have a hangover from the AEI of Northpoint which will cap the upside in the short term.
Management fees to be paid in units have increased from 20% to 50%, so this will allow more cash to be retained to be use for the capex and the company can avoid raising placement to do it.
In the long term though, I believe this Reit will benefit from the integration of the Northpoint, the completion of the DTL2 (Changi City Point) as well as the expansion of the Woodland regional center as a hub.
*Vested with 18,000 shares as of writing.