It’s been a pretty eventful week for me as I went on to take some time off away from work and the market to prepare some of the things required for my son’s birthday celebration last Thursday.
I have previously been alerted of some of the reporting earnings season, which did happen for both of my Reits. I have studied them and analyzed them pretty thoroughly and I made the decision to proceed with my second partial divestment this week for FCT at a price of $2.15 for 14,000 shares. I have also previously partially divested the shares which you can view here.

A lot of the investment thesis regarding the decision to sell remains the same as the one I previously suggested. Since the company has since announced their 2nd Quarter results this week, maybe I’ll take the time to also go through what I think of the results and outlook.
Financial Performance

I’m not going to go through the financial performance in depth since everyone would have an access to view the results directly from the website.
I think it’s been a pretty well executed textbook standard by now that FCT management is one of the best managers out there in managing the portfolio’s malls and extracting the best out of the lease to improve distributable income for shareholders every single quarter and financial year.
Both topline and bottomline have improved qoq and yoy, and the DPU for the quarter is the highest ever DPU for the Q2 reported by the company. Gearing level has also remained fairly low, which I will be touching on a little more later in details. Occupancy rate remains steady and high with top 3 malls contributing strongly to the results. 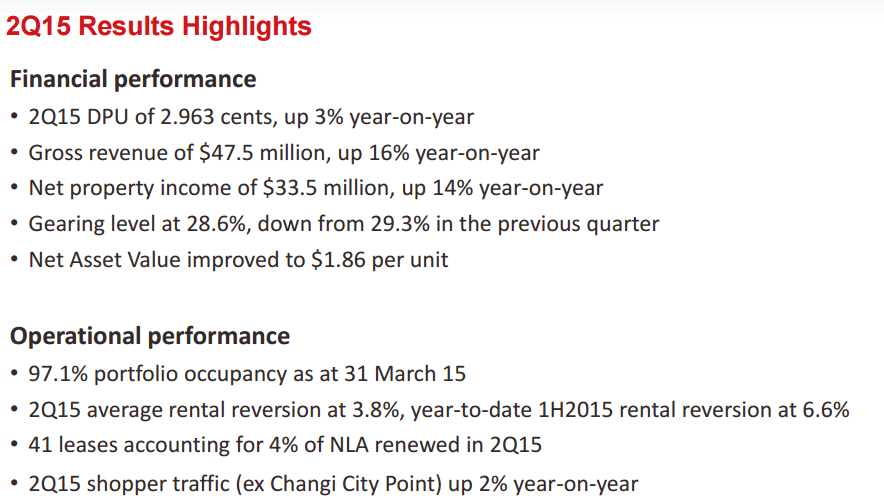 Debt Maturity
FCT gearing remained well managed at 28.6%, which allows them room for any sort of asset enhancement improvement in the near term should it be necessary.
The company’s average costs of debt is at 2.79% but as we will see from the debt maturity profile below, it appears that they will need to refinance the majority of their borrowings in FY15 and FY16 at a higher costs due to rising interest rate environment. The costs of debt will increase though the same can be said for all the other Reits with short maturity profile and it is one risk that investors need to take note of as this will directly impacts the bottomline of the distribution. Interest coverage ratio remains very comfortable so there is unlikely to be a risk where they are unable to repay the latter, unlike scene we’ve seen back during the GFC. 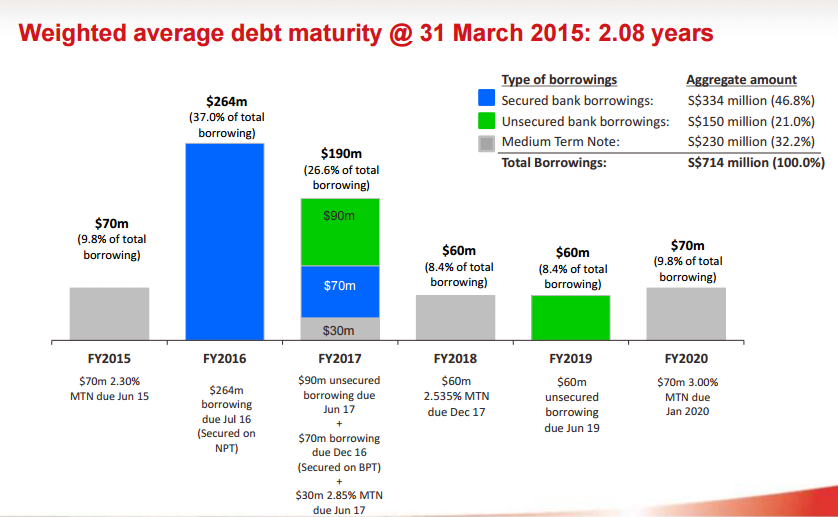 I previously shared in one of AK’s chit chat session which I was invited regarding the impact of shopper’s traffic and tenant sales in negotiating deals for step up rent. I had previously worked at one of the retail Reits so this is something which I managed to pick up when I was working there.
The role of the asset managers is to engage and bring in more traffic into the malls. This can be done through engaging impact performances or attractive events to draw in the crowds. MGCCT management is extremely good at this and if you are interested you can look at the various activities done by them to draw in the crowds.
The role of the tenants is to convert those traffics drawn in into sales which makes the basis for negotiating the step up rents with the asset managers when the leases expiry.
As we can see below, shopper traffic remained steady year on year while the company did not report any tenant sales performance. My suspect could perhaps be that tenant sales have dipped and the company may want to exclude this information from the performance slide. For our comparison purpose, tenant sales have been up and down for CMT, so this is something that we can refer to for any sort of guide, though the latter has a different portfolio of malls located across Singapore. 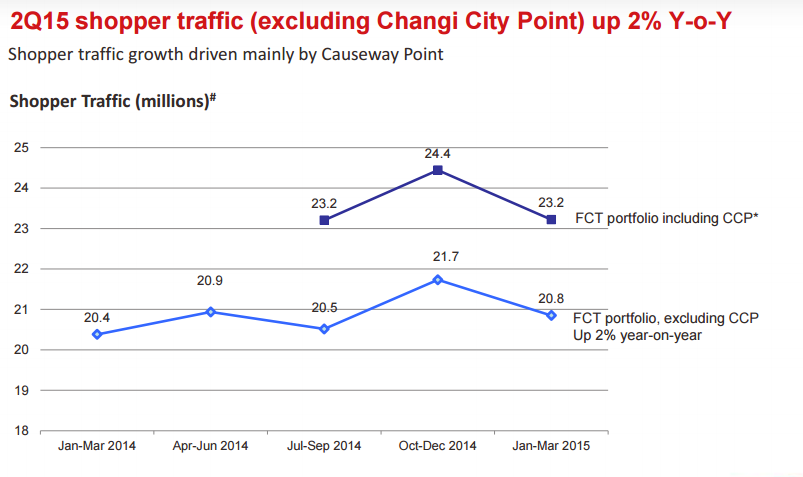 Step-up rents play an important role for any retail malls if we are going to see any increase in the distributable income for the foreseeable future.
As we can see from the table below, step-up rents are already under pressure as we see a lower trend of step-up rents across the years. This can also be seen from the various shutting down of brands in Singapore that have highlighted on the news for reasons cited as being expensive rental.
The FY15 highlighted below shows a clear decreasing trend now as we probably reach an inflexion point where the step up has to slow down, especially if traffic does not improve tremendously and tenants sales do not increase in tandem.
Having said that, I’m pretty sure the management is able to extract the best out of CWP and Northpoint since there are huge development being built over there in years to come. 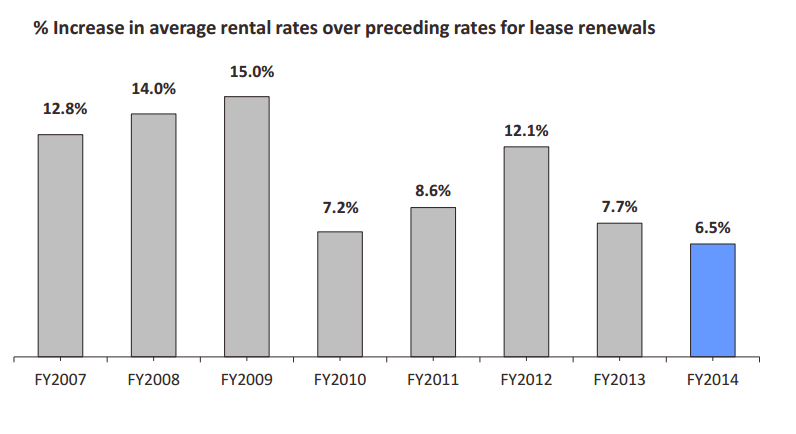 FCT is a good company and recent price have somewhat rocketted upwards due to positive investor’s sentiments about the overall market in general.
The company is now yielding at around 5.4% and if we take out 2.5% as a benchmark for the risk free rate, we should be asking ourselves whether we are undertaking sufficient margin of safety for that additional 2.9% for the foreseeable risks they are facing in the next few quarters.
My take on the overall Reits sector is that it has been pushed up rather too bullish in recent months and I would like to cash in on these euphoria moments since the opportunity presents themselves with it.
Some of the recent excitement regarding investor’s sentiment in purchasing some of the Reits such as CMT, CCT, Suntec, etc have baffled me very much. These people are buying in at such an excitement as if these Reits are yielding a high 8% to 9%. When I look closely at these Reits, they are having a forward yield of around 4.9% (that is less than 5%!!!). Although I concur that they have some of the best assets around in the portfolio, I just wonder if they are undertaking the risk too much right now by having those sort of returns these Reits are offering. Reits are afterall a vehicle that distributes more than 90% of their earnings, retaining very little for expansion and having debts on their balance sheet.

For investors going in at current price, I want to voice a concern to make sure that they know what they are getting into. The downside is obviously going to be much more likely than the potential upside so unless they have the mentality to hold through for a very long term, they might suffer some sort of up and down testing emotionally when interest rate starts to rise.