Following up on the recent full year results which I have blogged on my thoughts here, it’ll be interesting to update the valuation methods which I have done a couple of months ago (here) to see where it stands now that we have a more recent FY14 results to input.
Previous DCF Analysis
Just to give a quick understanding of the assumptions used in the previous model, I have used the FY13 results with a forward growth rate of -1% for the first year and 5% for the next subsequent years. The discounted WACC rate used is 10% with a terminal EBITDA multiple assumption of 11x. The model came up to an intrinsic value of $3.30.

I have now adjusted the model based on the following assumption which I think is more reasonable:

If there is one thing I would like to highlight here it would be to note the negative free cash flow the company is currently generating because of the aggressive expansion mode on the investment capex they are engaging. This is the very same reason why you would see a huge increase in the debt borrowings from previous year that almost double. They simply do not have the cashflow at the moment to run the expansion without the use of the leverage.
Based on the model with the above assumption used, the intrinsic value for a 11x multiple is $2.96.
You may have noticed that in my previous post I have segregated both the maintenance and investment capex that the management has revealed. Therefore, to include both the maintenance and investment capex in the above DCF calculation model is relatively unfair because you have not accounted for potential future growth arising from the expansion. In other words, we should be seeing a completely different model should the company is in a position that generates free cash flow from only its maintenance capex. If they can get to this stage, the free cash flow yield will be so high that it can repay all their loans in less than 3 years.
Based on this model, the intrinsic value for a 11x multiple is $5.16, a much improved from the previous round.

You might have recalled that I have previously blogged about a different valuation model using the Earnings Power Value (EPV) analysis in comparison with the DCF analysis. If you would like to review them, you can refer to the previous post here.
This earnings valuation by Bruce Greenwald is favored because it does not consider future earnings projections unlike the DCF model and rely on current earnings to come up with an intrinsic value. Some adjustment is required as we will see right now.
The concept of EPV starts with EBT that requires us to pick out an average normalized income that has been adjusted for historical trough and peak. This is to ensure that the income is normalized to average out any historical biases. For this exercise, I have presented 5 different possibilities by taking the average normalized income for 3,5,7, 10 years and the median. At first, I wanted to use the lowest amongst the 5 but thought it would be unrealistic to consider that way. The point of this exercise is to ensure that we do not overestimate the income used but certainly we do not want to underestimate the input either.
To smooth out the unusual years but reflect recent developments, I will use an average normalized income for the latest 5 years data, i.e $1,251 millions.

Next, the EPV analysis recognizes that part of the SG&A expenses are made to maintain and replace the existing assets, while the rest goes to execute and support future growth sales. Since we are only interested in what it costs a going concern to maintain the existing asset base, it adds back the portion of SG&A that are in relation to supporting future growth sales that should not be accounted for. Greenwald recommends at least adding back 25% of this portion as the bare minimum but since we know that a huge capex is being directed for future growth (92.6% for growth and only 7.4% for maintenance), I will be adding back 40% to the adjusted normalized income.


As explained above, the concept of EPV analysis should be based upon the current free cash flow of a company and excludes consideration for future projections. In this regard, only the maintenance capex will be subtracted from the adjusted normalized income. Since we know the actual figure from the management figure, we will stick with it.

We also need to add back the excess depreciation expenses into the adjusted normalized income since this represents a deduction for future growth related. While Greenwald recommends at least adding back 25% of the excess depreciation, it varies from industries to industries and I would prefer to be slightly more conservative by adding back only 18% of the excess depreciation (which is half the amount of the actual maintenance capex incurred).
WACC
We assume the discounted required annual rate of return here to be at 10%, which has been consistent with the figure used in the DCF analysis.
Cash and Debt Adjustments

The EPV analysis assumes that all the capital used is taken an equity capital. In other words, it ignores both the interest paid on debt and interest received on cash & cash equivalent including fixed deposit. Therefore, we will need to adjust by subtracting debt from the EPV and adding back cash in excess of operating requirements.

In summary, what we have now is the data below: 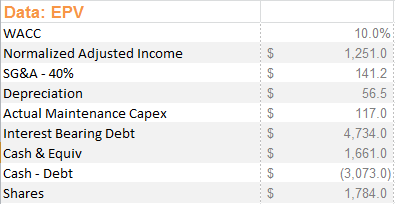 Based on the above assumptions used, we now have an intrinsic value of $5.74 after adjusting for the cash and debt using the EPV model.

Even though these models are largely dependent on the inputs and assumptions we put in, it stretches our research to outreach many of the individual items in the income statement, balance sheet and cash flow statement for our consideration. It gives a great exercise to understand every aspect of the company better by diving down to each individual items in detail.
Based on the comparative analysis in the summary appended below, we can see that the intrinsic value for the DCF case 1 is $2.96, which is about similar to what their current book is being valued. The reason for such low valuation is because much of the growth capex has not been accounted for in the potential earnings growth which might come a bit later in the years that we do not accounted for when doing the DCF analysis (mostly we only take into account the next 5 years of earnings).
Comparing this with the DCF case 2 by taking out the investment capex, we get a much higher valuation at $5.16. The reason is because by only retaining the maintenance capex, the company is able to generate a very high free cash flow that they are able to repay all their current loans in 3 years.
It is therefore also not a surprise to see using the EPV model come up to a valuation of $5.74 because what they are essentially doing here is to account for current situation, not future projections. Using this model, the current price would provide a 35% discount to the intrinsic value.

Doing this exercise has allowed me to understand the company on a level much better than before. I remained fairly confident that the management is able to generate returns to shareholders much better in the future with the investment they put in right now. The oil risk saga, debt level and continued drained free cash flow at the moment is one aspect of risks we need to give a fair consideration but given the management past record on churning out good internal return, I think they’ll be able to manage the cycle effectively.

Vested with 9 lots of SCI and am looking to increase position should the opportunity arises.