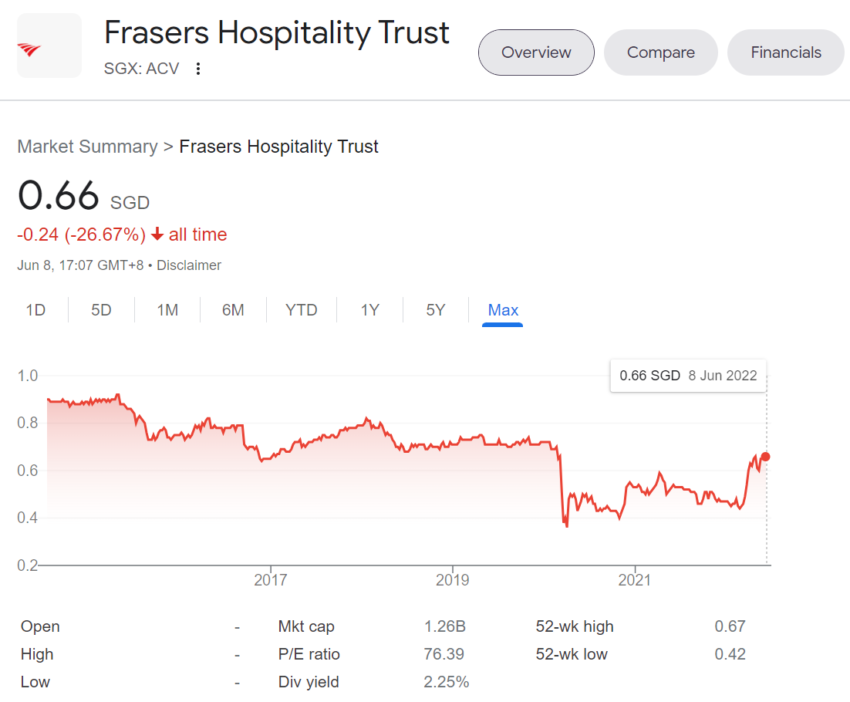 More delisting are on the way to our precious REITs arena as the latest news that Fraser Hospitality Trust (“FHT”) will be privatized after a strategic review comes in to decide to delist the REIT.

The Scheme Consideration of $0.70 in cash per scheme stapled security represents:

The stock last closed at $0.66 before it was halted before the news announcement came in.

The offer of $0.70 is pretty much a fair deal but whether you are happy as an investor receiving the deal will depend on when you purchase the REIT.

If you had purchased this during the depth of the pandemic, you would probably be staring at more than a double return.

But what about investors who bought in during the IPO days.

FHT made its public offering back in 2014 at the price of $0.88, so investors who bought in during IPO days would feel a bit sour given the cash deal of $0.70 is lesser than what they have paid back then.

But let’s take a look at how much dividend investors have received so far if they held since the IPO days.

Taking all distributions since IPO, investors would have received a total amount of distributions worth of $0.2955, which would put an investor who invested during IPO still at positive return territory.

FHT’s portfolio grew by 35% since IPO, making 3 major yield-accretive acquisitions amounting to about $565m and a couple more of AEI initiatives to improve the asset.

Sadly though, the industry has been grappling with tough times as it faced a double whammy of longer-term stay and DIY competitors such as Airbnb as well as forex challenge when investing in foreign properties. The REIT also had rights issue back in 2016 to fund one of the acquisitions to account for.

If we look at the RevPAR CAGR ex-pandemic, most of the markets which FHT has been operating at has muted growth, which suggests even as we recover back to pre-pandemic level, the REIT is always going to struggle like it always before.

As a result, NAV has gone down over the years despite an increase in the number of properties which makes it really hard for the manager to continue to hunt for yield-accretive deals which will improve both DPU and NAV.

NAV usually plays a big part when a tender offer comes in for a property and the offer $0.70 is a slight premium to the NAV it was trading (~1.07x) so I would personally think it is a fair call.

This is one of the important consideration especially when investing in smaller REIT with not much operating leverage to play with.

The Cap rates – formulized by the net operating income over market value is only good when your numerator increases, but not so much when it is caused by your denominator decrease. In other words, the REIT may offer a compelling yield return but if NAV has been falling over the years, it will sooner or later succumb to the temptation of a delisting by an offeror.

I have no position in FHT at the moment but if I have, I will likely be accepting the deal given both the circumstances both internally and externally.

If you like to open up a brokerage account to trade either SG, US, AU or HK stocks, do consider Tiger’s new welcome bundle promotion here.