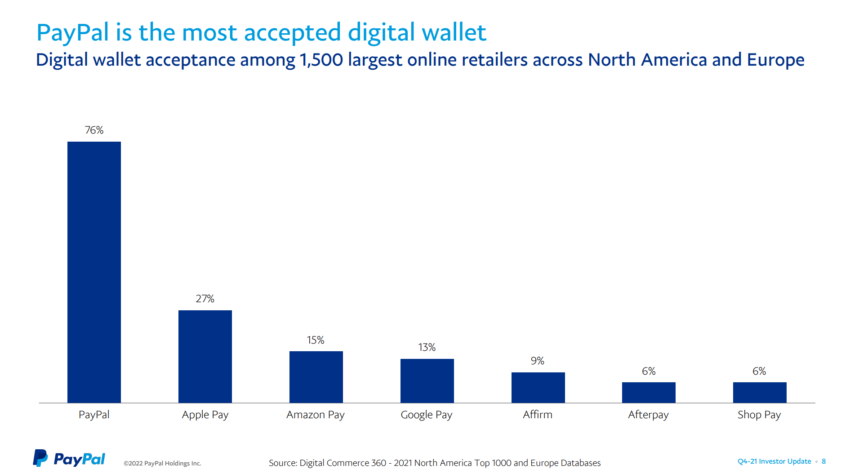 PayPal Holdings slides after it announces its Q4 and full year earnings post-market.

This was a dejavu to the announcement made for Q3 when it suffered the same fate after it plunged post announcing the earnings result.

Let’s first take a look at what they have announced.

Going through the earnings announcement for Q4, it was not as bad as it seems at glance.

Net new accounts added during the quarter was 9.8m, which slows from the previous quarter net adds of 13.3m. It ends the year with an annual active accounts of 426m.

Transaction volume ballooned to $6.38b, rising ~23% YoY due to the acquisition of Venmo during the year. Venmo alone processed and contributed $60.6b in TPV during the quarter.

PayPal ended FY2021 with a topline of $25.4b and EPS of $4.60 – which gives the company at 8x P/S and 38x PER before the post-earnings plunge. Assuming the post-market plunge to $140, the company would still be trading at 6x P/S and 30x PER. Not exactly super cheap unless we can be sure the company is still demonstrating growth trajectory plans.

The biggest problem with a growth stock is its weak trajectory guidance, which investors have to watch closely if they are transitory or permanent in nature.

Clearly, PayPal is still the dominant player outside credit cards when it comes to digital wallet. So they do have business moats to show and are also exploring more product offerings to its consumers and merchants. The recent acquisition of Venmo and crypto adoption are still in the early stage but the company has shown what it is willing to do in order to gain further market share.

However, the company guided for a weak negative growth EPS in Q1 with $0.87 and topline revenue only growing by a single digit 6%, which is well below a growth stock expectations.

Note that this EPS expectation for Q1 next year was lower than the EPS earned during this and last quarter of around $1.11, so we are seeing negative growth and market clearly demonstrated they do not like it.

If you break it down and negates the Q1 guidance, it appears that the company will accelerate its growth in the second half of next year guidance, which may then represent a chance to accumulate between now and Q1 earnings next year.

The continuous double digit growth in FCF is also something to watch out for, which the company has been aggressively using it for capital allocation buyback in 2021.

Price action has been on a downtrend since it last peaked back in Aug last year.

Coupled with the recent weaknesses in their last earnings announcement and the recent tech correction, the share price has now hovered well below all the critical moving averages.

Post-market price action after last night earnings result seem to further hit the company’s share, which is currently down around 18% post market, and we may well see the share price hitting as low as $130 by this week once the flushes finish.

$130 is an important support which coincides with the gap which is waiting to be filled (see chart).

For valuation, I’ll be using a very conservative figure in the DCF calculation which I will explain below.

I started the model with a FCF in FY2021 of $5.4b, and the company has guided for FY22 FCF to be at $6b, which is a 10% growth. Historically, the company has grown by a much accelerated figure so to keep it at 10% constant growth for the next 5 years is very conservative in my opinion. The company should be able to do much better with this over time as their other early stage product offerings mature and inflation hitting a high of 7% projected in the US side.

Speaking of inflation, PayPal business model works well in an inflationary environment where businesses get to raise their prices to consumers and PayPal would be a direct beneficiary of the rising prices which takes a bigger cut on their business model.

Going back to the model, I had also reduced the outstanding shares by 1% every year until 2026 as the company seems to be doing some aggressive buyback even after some acquisition we saw this year with Venmo.

Do also note that the cashflow multiple is at the conservative 20x to 30x based on the sensitivity while today and past historical it has been trading from a range of 30x to 50x.

As a result of a lot of the conservative assumption, we have reached an intrinsic value of the company at about $157, which is not too far away from the post-market price we will see tonight. Do note this number is conservative so we should see a higher number than this.

Assuming a slightly bullish assumption in the model where I assume a 15% growth after 2022 when the eBay transitory is over and other product offerings mature, and cashflow multiple is also raised to 35x, then this will look more appealing at $245 intrinsic value today.

I don’t think we want to put ourselves in that kind of situation though where we assume market bullishness and expansion.

I like what I am seeing in their Q4 earnings but less so in the Q1 FY2022 guidance (similar like the market).

However, the Q1 weakness appears to be trajectory in nature as the company sets to resume on its growth in the second half of the year.

Based on the above mentioned reasons, and taking into account both the fundamentals and technical, I’d wait until the price hits $130 before trying to pick up. I’d likely use a combination of puts or leaps in order to wait while getting some premium for it (averaging down further my costs) meanwhile. But with growth stocks under pressure and will likely continue to remain weaker than before this year, there’s really no need to accumulate in a hurry for the likes of PayPal which has clearly guided for a very weak Q1 ahead.

2 thoughts on “PayPal Plunged After Earnings – Opportunity or Stay Out?”