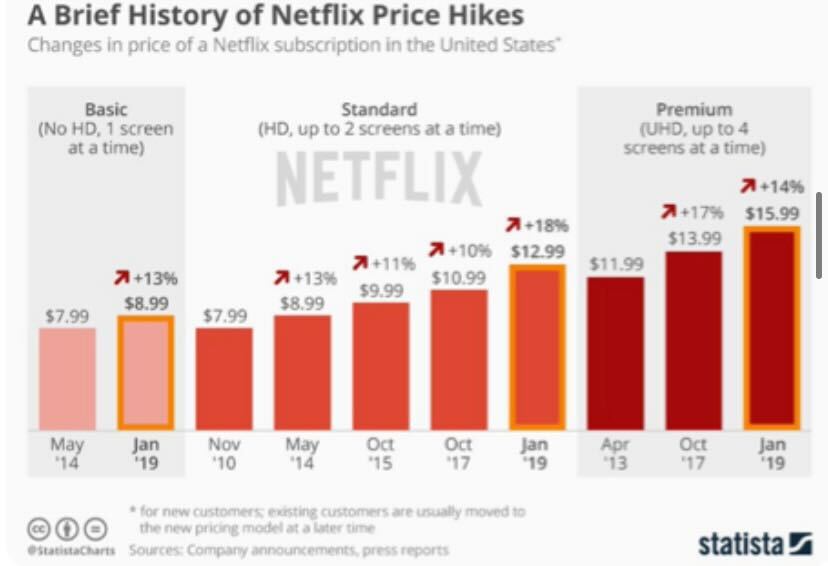 Following up on my previous article on Netflix, the company announces a significant news of a price hike yet again to as much as $20 a month in the US region where they have most control over with.

Barely just a week before earnings, Netflix is doing their regular habits of hiking prices early to the consumers every two years or so, citing inflation as one of their main reasons for doing so.

The service’s top tier is now 42% more expensive than it was in late 2018 and a significant increase bump to the topline numbers assuming subscription numbers remain constant.

They have been very successful in the past price hikes which led them to where they are today but with competitors sizing up, we may not know if subscription numbers will drop or fall off to these recent changes. The company has been reducing their prices in regions where it struggles like India, so this move may make sense given the US has just recently announced a record breaking inflation month earlier this week.

Wall Street appears happy as the stock price rose 1.25% on the announcement of this news, closing green last night.

The stock price has been on a jitters since the start of the year, trending along the weakness in all other tech stocks with a rotation play back to value.

Netflix’s revenue will get an immediate term lift with this news which will increase their topline by more than $1b annually but we’ll have to see if growth stalls because of this.

While they have been successful with doing so in the last few years, a good reminder also for for a case study of cable who has last market share over the past decade by making itself price expensive that forces people to re-evaluate the need for the subscription.

With competitors sizing up, there are now plenty of alternatives to online streaming today with the likes of Amazon Prime Video, Disney+, Apple TV and many more.

In terms of technical chart, the stock price has hit my short term target of around $514 on the weekly EMA100 last night which I have taken a part of profits from my short/buy puts position. I’ll leave the other half in anticipation for the earnings announcement next week.