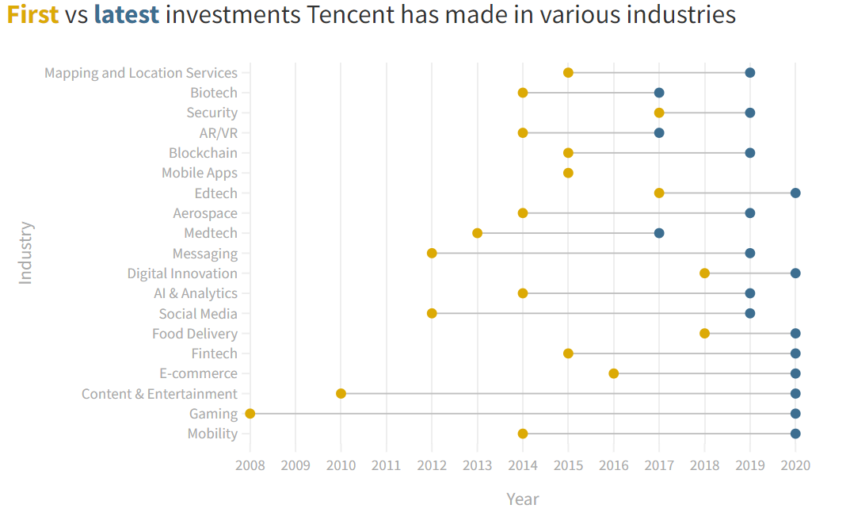 If you are following my social media page, you are probably already aware that I am in the midst of accumulating more Tencent shares in the past recent weeks (I am done accumulating my position for Baba and has now moved to Tencent with the intent to build a position larger).

At the moment, my position is currently down at about ~4% but this does not concern me at all.

In fact, I hope it can maintain at this range for a while more so it will allow me time to build up my capital over time to add more positions into the portfolio (will detail out the essence of building more positions through capital allocations in the next post separately).

For now, I am thinking to build up this position until I’ve accumulated around 2,000 shares in the portfolio, or around 25% thereabout but given the nature of the capital allocation, this can only be done slowly over time, possibly stretching until mid of 2022.

You may find some of my reasoning here a little biased since Tencent makes up the second highest position in my portfolio. Nevertheless, here are my top 5 reasons on why I am accumulating Tencent and why you should be doing too (in my opinion):

The metaverse is considered to be the next biggest trend in the next decade especially after Facebook announced its intent to go all in on the metaverse over the next few upcoming years.

Since then, many companies including the likes of Microsoft, Unity, Nvidia, Autodesk, Roblox and many others have signalled their intents to join in the metaverse era.

Tencent – the largest global gaming company by products and distributions – are set to also benefit from this trend as they have a clear business moats to dominate the gaming industry over the next decade. To date, Tencent owns 40% of Epic Games, the creator of 3D content and gaming platforms and holds a joint venture with Roblox Corp.

The company itself has also registered more than 20 Metaverse patents for apps in China and have openly declared their intents to take on the Metaverse to the next level.

An article from Huang Zheping – who is dubbed the tech and gaming expert spoke about this in Bloomberg a while ago:

“You design your 3D avatar on the QQ Chat app and use it in the live stream calls with colleagues on Tencent meeting. After work, your avatar pops into a game of PUBG Mobile and wins a ticket to a virtual concert on Kugou Music. Seeing conflicting schedules, you then sell the ticket on WeChat in exchange for a new haircut for your avatar the next morning. A scenario like this involves video streaming, gaming, social networking, e-commerce and money transactions. All of this made possible through Tencent intellectual properties and products.”

If you are interested in getting an exposure to Metaverse, especially in the gaming sectors, you should look no further than Tencent (there are of course other plays and exposure you can get too with the likes of Roblox, Unity, etc).

China’s cloud infrastructure services are growing rapidly and in the third quarter, revenue grew by 43% year on year to US$7.2billion.

The China’s cloud infrastructure leading players are dominated by a few players in mind – notably Alibaba, Baidu, Tencent, Huawei – these 4 makes up more than 80% of the entire cloud revenue segments.

In Tencent’s book, Fintech and Business services made up 27% of the total revenue so this segment will grow over the years with cloud growth expectations are set to grow at a CAGR of about 35% over the next 5 years from its total TAM.

Tencent made its first investment outside China back in 2008 – to a company called Outspark (a small based US gaming company). This investment came 3 years before Tencent released WeChat (now the most widely used messaging platform in China and also the world).

This investment made the foray for Tencent to start becoming a behemoth of being a funder into great companies.

Today, Tencent has funded more than 150 companies outside China and has a diversified portfolios into many other industries such as Biotech, Blockchain, Medtech, AI, Food Delivery, Fintech, Entertainment, E-commerce and many more.

For those who are not familiar with exactly what investments they’ve made, being a Tencent shareholder means you indirectly own the likes of Tesla, Nio, Sea Limited, JD.com, Snapchat, Epic Games, Meituan, Gojek and the lists go on and on.

*It is difficult to ascertain the exact valuation for all of these companies because not all of them are publicly listed. An example of that would be the likes of Epic Games and Discord – these are mostly sought after and back in early 2021, Discord even rejected bids of funding from Microsoft.

Shareholders of Tencent have to thank the CCP for the volatility they have caused this year because without that, there is no way we will be able to invest in such a great company with a fair or undervalued valuations.

To put things into perspective, they are currently trading at about 18x PE TTM and 1 SD lower than their average 5 year mean.

The company is also trading at an EV/EBITDA of about 21x which is very reasonably cheap for a company that’s still growing at 20-30% a year both organic and inorganic combined.

For those of you who knows Prof. Damodaran from NYU, he also made a valuation exercise back a few months ago in Sep 2021 by dividing his scenarios into 3 parts (Government as benefactor; Government as Net Negative; Government as Adversary).

The difference with all the 3 scenarios came from the lowering of the revenue growth and profit margin as a hedge to determine what sort of margin safety we have as an investor.

Tencent has been consolidating for a few months now and you can see that they tend to “peak” in the short term at about $500 and the lower channel is about $425. At the current price of $438, we are nearer to the lower end of the consolidation channel so if you are interested to pick, you can either wait for slightly lower or you can enter anywhere in between (up to your call).

We are also near the monthly EMA50 support which has never been broken yet since the 2016 ruckus back in the days. This will serve to provide a good range for buying opportunity and I will likely use this indication to load up my positions over time, which hopefully it stays like this over the next few months.

I haven’t talked much about the risks in this article but if you are an avid follower of the Chinese regulation you would know that the government has been very protective towards data protection and privacy and also how gaming might impact the younger crowds.

I do believe that the company is proactively reacting to this regulatory and are in compliance with whatever they need to do as they’ve been over the past couple of years.

While these sentiments might stay here for now, I do not think these sentiments will stay for a lot longer timeframe. In the meantime, what you are getting is a business that is continuing to grow at rapid pace at a cheaper valuation every single day they are churning profits.