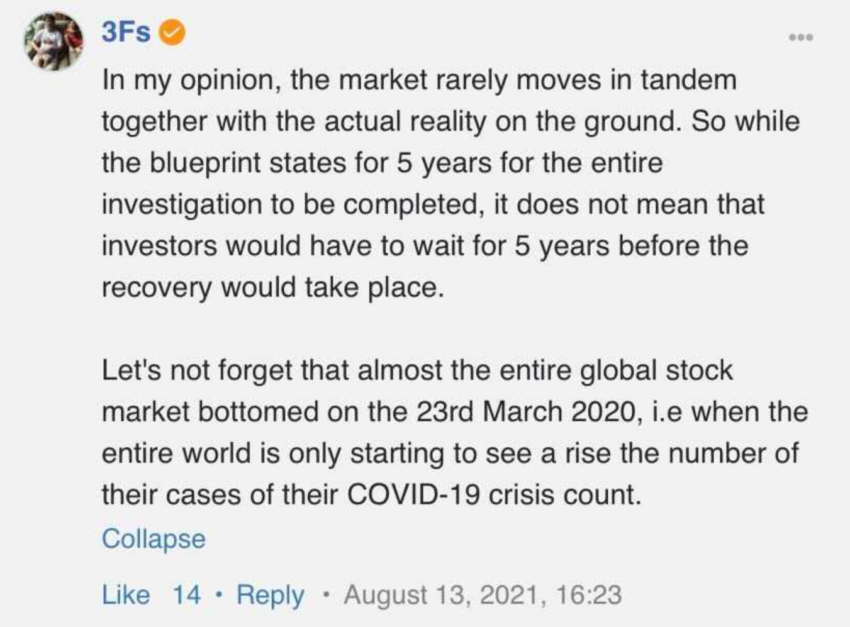 What is the most precious thing you would get your learning from as an investor or trader in a bearish market environment?

The answer is noise.

Noises are sound pollution that you would get in every market correction and bear market because of the increasing fear forming in the market.

In markets with a highly noisy environment, the higher the abnormal returns are because prices often go through quick capitulation and rebound due to the rising volatility in the market. There many people who are uncertain about what they need to do in a concerning environment so they look for answers in forum and the internet. Unfortunately, this usually takes a while before they realise that they are holding on to something that’s growing in fear – the possibility of seeing their networth plummet each and every single day.

By the time they have decided to sell and cut loss, they are likely to do it close or near the bottom. And then these very same group of people switch their investments in a “comfortable” market environment like the US right now. By the time the US market undergoes their correction cycle, these people are likely to run again because they’ve learnt nothing about the cycle of the market.

If there is one thing which I’d like to archive for my own future reminders, and also to help other participants in the market, it is these noises which I’ve captured in popular forums such as Investing Note, Seedly and a few others over the past few months.

These are very important because you notice they are not that easy to find in a comfortable environment (which happens for most of the time) and will only appear once in a few years where there are increasing volatility in the market.

The most valuable noises that investors can gather were times during events such as the dotcom bubble, Great Financial Crisis, Short-Selling Squeeze, Covid-19 and the China regulatory events. These are likely where most of your learnings and returns are being formed.

Before we begin, do note these are the following unintended rules I have:

If we take a look at the Baba’s chart (I am using Baba as example as it is my largest position in the portfolio but I believe most Chinese charts look the same), I believe we are not out of the woods yet. I was actually a bit disappointed when Charlie announced its purchase publicly a week ago which resulted in a very strong bounce thereafter.

Like many other technical traders, I was waiting to increase my position at around $128-$130 thereabout, given it’s previous strong support level but it did not hit there and has rebounded since.

The share price has recently broke the EMA50 but now face a strong resistance level at $181 (EMA100) and $200 (EMA200), which will surely bring about some profit taking in the making.

My average price, particularly for Baba, is within this resistance range, so it doesn’t make sense for me to add further to my already heavy position at this level.

This is actually easier than what most people expect it to be.

The one effective way to survive a noisy environment is to know what you are doing with your plan.

Once you have established the underlying, next is to plan accordingly the level which you are willing to add – if allocation still permits.

Looking for answers in a forum are hardly a good exercise as there are multiple views in a publicly open settings which might oscillate your own views and conviction in the idea.

If you must read at the forum, at least take the effort to screenshot these noises and revisit them as part of your learnings when things are rosier.