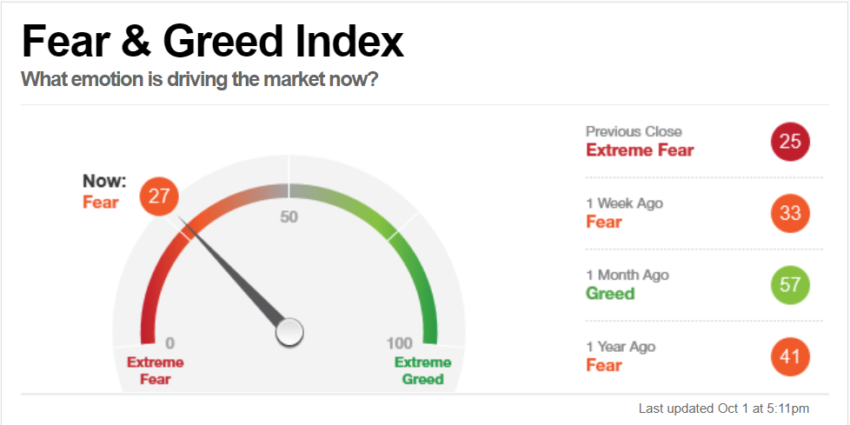 The US market underwent a nice little correction in the past two weeks which made it a real sweet spot for option investors.

If not for the Merck news announcement yesterday, we might have a real throb to end the week with more correction done.

Fear level continues to be low at about 27 at market participants are absorbing the end of the week.

The index itself and many of the companies are testing important support level of EMA50 and EMA100 respectively so this makes it very enticing for option investors who are looking to pick up some bargains in the market.

Here are 3 options trades I am looking to trade at next week when market reopens.

Adobe Inc. has retreated about 10% since the company reported its Q3 earnings just a week ago.

The company reported an expectedly strong earnings by increasing topline at 22% YoY to $3.9 billion in Q3FY21 and EPS grew by 21% YoY to $3.11 for the same period.

Management guided for a lower YoY growth in the Q4 at topline $4.07 billion and EPS of $3.18 for the quarter. That is roughly about 19% and 13% YoY growth respectively and only a mere 4.3% and 2.2% growth QoQ respectively, which the market took it as a signal of slowing down.

The rather rich valuation of Adobe at 46x forward earnings and price to revenue multiples of 17x are also above their historical valuation, so there could be some profit takings in the making.

The recent correction after earnings and market choppiness makes it a worthwhile move for option investors because it satisfies a few rules we have when writing options.

From a yield on margin perspective, the option yields a nice 1.4% for just a holding period of 1 week. The annualized yield on margin figure would have ballooned to over 74%.

If we want to take a slightly conservative approach by writing at a lower strike price of $540, which coincides with the Weekly EMA50 support, it has a premium of $107 / contract. That would put your margin of yield at 0.83% for just a holding period of 1 week, or over 44% annualized.

If this is a company that you strongly want to own in the future, you might even consider writing a longer term put.

SEA Ltd is one company that no longer need further introduction to investors.

The company raised capital of over $6 billion recently in order to further expand its presence and dominance in Latin America, India and even parts of Europe. The CEO is a strong allocator in capital and if past histories were to show, they have shown increasing resilience in their key unit economic metrics despite the very tight competition in the market.

SEA Ltd has been one of my favourite companies to write for options in the past several weeks and months because it is actually a very good company to own because of its fundamental value and is pretty volatile from price action which contributes to a good IV for option investors.

The company managed to close the week with a strong above the EMA50 support on Friday so that is a positive sign that there is no sign of breakdown just yet.

For option investors, you can look at the strike at $300, which sits just above the weekly EMA20 and has a pretty lofty premium at $180 / contract.

From a yield on margin perspective, the option yields a nice 2.7% for just a holding period of 1 week. The annualized yield on margin figure would have ballooned to over 140% in this case.

If you are a slightly more conservative investor (a position which I prefer personally), the strike at $295, which coincides at the Daily EMA100 has a premium of $135 / contract. That would still put your margin of yield at a mouth watering 2% for just a holding period of 1 week, or over 104% annualized.

This method allows you to be patient while waiting for the price to retrace back to its important support levels.

The company is slated to announce its vehicle market deliveries for Q3 and it looks like it is on course to deliver a record full year figure.

Still, that doesn’t stop recent selling from fellow institutional funds like Cathie’s ARK and Chamath who have been paring down their shares in Tesla which contributed to the recent volatility.

Tesla has been one of my favourite option weekly play because the premium is just ridiculous for a company with such a big market cap.

Still, with its lofty valuation, I wanted to make sure to be prudent hence the much buffer focus for margin of safety and a shorter time frame to pan out decisions on any earnings or market shock.

I have been selling Tesla put for the past couple of weeks (on a weekly 7 days option expiry timeframe) between the range of $600-$630. On the past several days when market was more choppy than usual, the premium gets even juicier.

If we take the higher range at a strike of $650, which sits nicely at the daily EMA200 support, this will yield you a juicy $383 / contract. That will put your yield on margin at an eye-popping 4.5% for a holding period of 1 week. Even if Tesla had a bad week ahead, it would still have to crash by more than 19% before you would start to see negative returns on your contract.

The crash can still possible in the worst case scenarios where they might announced bad deliveries or earnings so I would particularly look to avoid writing before such announcements are out.

If we take the lower conservative range at a strike of $630, which coincides with the weekly EMA50 support, this will still yield you a very nice $279 / contract. That will put your yield on margin still at a very high 3.4% for a holding period of 1 week. Tesla would have to crash by more than 20% in a week timeframe before you would start seeing your negative returns.

There are probably more companies that were in my radar such as Apple, Microsoft, Cloudfare, Micron, Nike but some of them have rebounded strongly on Friday and none are so far as attractive as the 3 companies mentioned above for a shorter time frame play from both fundamental and chart perspective.

8 thoughts on “3 Options Trade Ideas For Next Week”