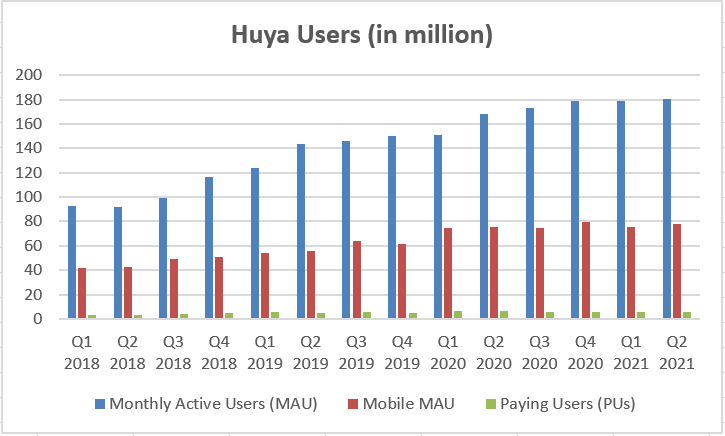 The last time I wrote about Huya was back in June when I took a position at approximately below $15.

You can view the article here if you are interested.

Since then, the company has plunged due to the fear over regulation on gaming which has also impacted other gaming companies such as Douyu and Tencent.

This article will be focusing mainly on the Q2 earnings which they’ve just announced and the highlights that investors should look upon.

Let’s first update our spreadsheet on the key metrics that everyone is interested about.

Average mobile MAU is now at 77.6m users while paying users have declined to 5.6m, which is the lowest since Q1 2020. This is not a good sign and in my last article, I highlighted the importance of the company shifting away from the current monetization model to something which is more tangible.

While the proportion of the live streaming revenues still dominate the earnings, the one particular thing to highlight from this earnings is the amount of advertising revenues that have grown significantly this quarter.

This now represents 13% of the overall net revenues and likely will be expected to increase over time.

If we look at the model which Twitch and the other big players are now adopting, the majority portion of their revenues come from advertising.

We can expect the monetization model to slowly shift and become dominant over time and this will reflect in the bottomline a few quarters after.

At today’s market price of around $9.3, this brings the enterprise value of the company to only about less than $600m, which looks extremely cheap across any key metrics that you are measuring.

If we annualized the earnings, this would value the company at a Price to Enterprise value of only 3.7x and a Price to Earnings at 18x.

If we exclude the net cash, then this would be valued at Price to Earnings at roughly 5x.

While it is cheap, the implications of what is happening in most Chinese stocks today bring most companies value to be considered cheap so there is not much relative comparison in terms of value perspective.

The conference does provide a bit more insights than the announced results. Let me try to cover the highlights which I managed to take note.

Answer 1 – The management made two versions of scenario for this year on the merger – one which is the successful merge and another which is the unsuccessful scenario. Now that the outcome is out, there won’t be major changes to the content strategy from before.

Management is also expecting MAU to continue to grow in 2H and main focus is to grow mobile MAUs which is more of key metrics than overall MAU.

Question 2 – What is business strategy in the future after the post failed merger with Douyu? Also, can management share some insights on further integration with Tencent.

Answer 3 – Seen significant results in overseas as can seen from the 200% year on year revenue growth and operating loss shrinking significantly which will help the overall bottomline over time.

Video content users have been increasing. Average MAU who watched video content increased by 30m in Q2. In the near future, will also launch video content on Huya’s platform based in Q3 onwards – which will be segregated in terms of traditional video and live streaming.

Answer 4 – Still in the midst of contemplating monetization model between video content to integrate with live streaming. Still in the early stage about monetization but advertising would likely be more appropriate.

Question 5 – How will education regulation due to children holiday period impact the active users? OPEX objective?

Answer 5 – Growth in users due to school holiday but education regulation haven’t seen much impact.

Answer 6 – The huge cash balance is used for broadcast and content user acquisition, and will consider M&A from time to time but have not found a suitable one at the moment.

The overall key takeaway I get from both the earnings and the conference is that management has put key focus on increasing its mobile active users and overseas investment acquisition strategy.

While the company remains cheap on valuation, sentiments on Chinese companies remain poor and there seems to be not much catalyst from the gaming segment which might push its share price closer to what it should be properly valued at.