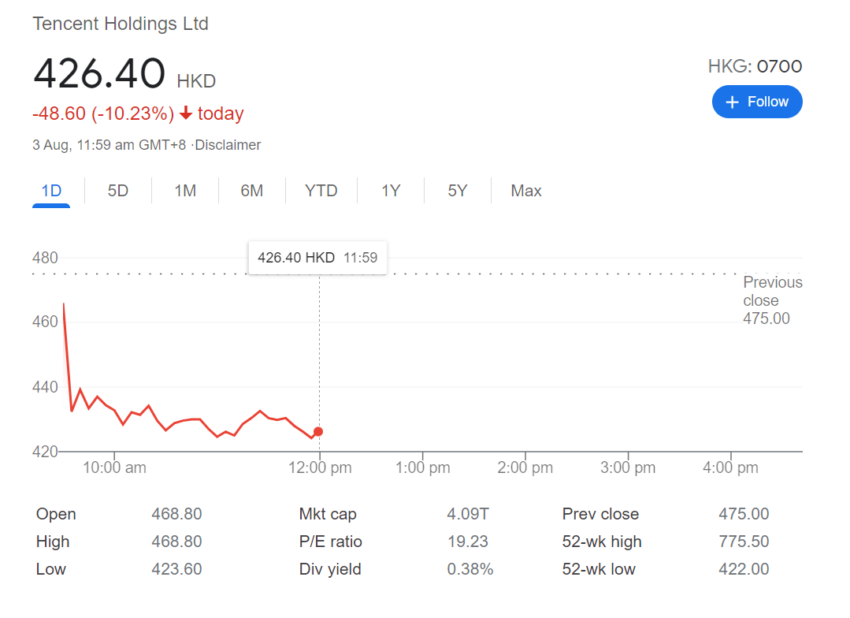 This will be a quick post to touch upon the 3 things that are related to gaming industry, particularly Tencent – given that it is currently the talk of the town at the moment.

In case you have not heard of the news that were circulating this morning, China’s state-run Economic Information Journal Daily – stole today’s headline by titling the article “Spiritual Opium Grows into Hundreds of Billions of Industries”, which likened online games as hazardous especially to young people and seek to regulate them as soon as possible.

This is not the first, and neither is likely the last we’ve seen on regulations that will be rolling every few years and then.

This sends a spook across investors and spiral down to gaming stocks such as Tencent and Netease which dropped more than 10% this morning.

In 2018 during the last regulation taken on gaming industry, the government announced the establishment of a gaming regulator – in response to concerns about the time overspend on gaming as well as near-sightedness in children – to limit the number of new online games, restrict playing time and develop an age-restriction system.

At the same time, the government also halted approvals for new video games, which lasted a period of 9 months, dealing a significant bear market for the gaming industry.

As a result of the regulation, Tencent dropped by as much as 49% from the peak back in 2018.

Back in 2000, there were outcry from parents over the lack of regulation over gaming, which resulted in many children playing games overtime more than they should be.

With the console ban in full effect for 15 years from the period 2000 – 2015, Chinese gamers’ consumer habits and behaviours took a different turn when they decide to hop on internet cafes to play the up and rising MMORPG online games instead.

When the ban was finally lifted in 2015, companies like Sony and Sega started to sell versions of their consoles, which is now widely available across all over the country. There were still close restrictions to newly launched games which gamers can purchase through their neighbouring countries such as Hongkong or Japan.

In the last annual report earnings for Tencent, 32% of Tencent revenues comes from online gaming.

With the market dropping by over 10% just in a single day, I would think that is a little over-reaction from the market even if a new regulation comes into play. It is also unlikely to be a total ban for teenagers under the age of 18 to be allowed to play. Hence, the impact to Tencent’s earnings are likely to be even much lower than 2.9%.

This would of course, changes significantly if they were to start putting in regulations on esports, which affects the larger part of the population and market.