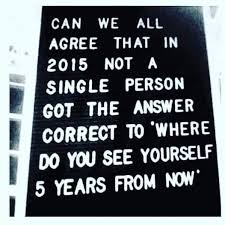 Imagine yourself sitting in an interview desk back in 2015, and your interviewer asked you this million dollar question:

” Where do you see yourself 5 years from now?”

Clearly, like most interview questions, you’d likely have to say something nice or good about your role progression and how you want to achieve success and helps the company grow and all that stuff.

The truth inside our hearts – we don’t know which company we’d be working at or if the company would even survive after 5 years. Heck, most poor people don’t even know if they can still survive till tomorrow and have another day to live by.

Most people would certainly not see where their next 5 years envisage – when COVID strikes the world fast and hard, not allowing many companies, businesses and individuals to transform and save themselves.

One famous American Philosopher once said this:

“Forecasting is a difficult business, particularly when it is about the future.”

Every year during the roundtable discussion, analysts and economists are asked about prediction for next year jobs number, inflation rate, interest rate, S&P500 and many more.

The results were appaling.

Statistics have shown that only 50% – 55% at best have forecasted correctly while the rest got it wrong.

If you toss a coin randomly over “n” numbers, you’d likely get similar results – with the advantage of not even having to rack your brains for it.

Most forecasts are being done contextual in nature.

We collate the information in our brain about what we know today and then try to extrapolate it forward over the next 5-10 years. That’s why you’d likely see most GDP forecasts go up a straight line over time, as if nothing in the world would happen to dampen all the mood around that.

Our fears are hidden in the primitive brain at the receptor back called the amygdala.

This is why most investors wouldn’t naturally think of the bad consequences when they entered the stock market or the gambling casino table. They simply go in thinking how much they can earn or win, not how much can they lose.

Companies like Starhub, Sembcorp Marine and Singapore Press Holding have been seeing gradual decline in earnings for the past 20 quarters of earnings (which exactly point to 5 years) but they are much clearer when we are looking it on hindsight say, after the first few signals of decline in the business and industry sector.

A case example made was the article of Starhub Holdings – a company I have written back in 2019 (see link – Why I Think Starhub Is Going Down To $1 – 3foreverfinancialfreedom (3Fs) Financial Independence).

Back in 2019, there was already an obvious trend of decline for telco companies and its share price was revolving around $1.34. I had taken a short position but soon realized it wasn’t as easy as it appears as most of the bad news have already been baked in. Two years after, the share price is hovering around at $1.21 today, which is not too far away from where it was back then.

The point I’m trying to make here is that price prediction is easier to see when you are doing it on hindsight.

When you look back at the condition of the company and how the share price of a company has went southwards from years ago, you wonder why didn’t you take an opposite position (shorting) if it were so obvious that the company is in decline and its share price is going down.

If the 5 STI generals were performing so badly, and things were so obvious to the eye, then it would make sense to have a foot in the water and place opportunity positions when things were still doing well at the peak (example: Starhub reached the peak at $4.13 back in 2014).

For everyone else who did not participate, price prediction is at best a hindsight in making and a confirmatory evidence once the chart is drawn full enough to show that.