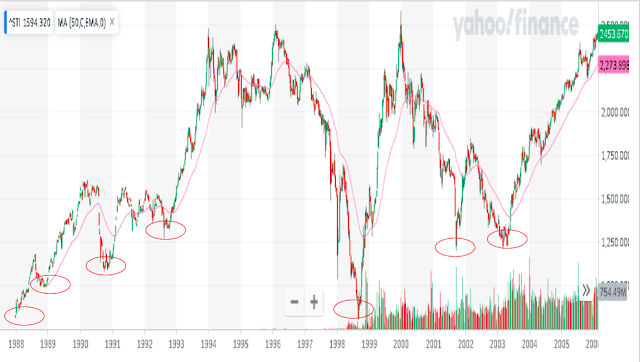 We are once again in the market cycle where fear and turbulent times are over-riding investors’ sentiments towards the market.

In fact, a Bloomberg news article reported last week that Singapore and Thailand are two of the worst-performing market in Asia with the two markets down 24.95% and 24.96% respectively.

Singapore, being an open export-oriented economy, struggled to find its feet under the radar after a soft reopening in the economy fails to spur up buoyant in the market.

For the older investors that have been around in the market for a while, this isn’t something new that they’ve encountered in the market.

Let’s take a look back at how STI performed in past global recessions and how it managed to bounce back.

Singapore is a mature open state with a focus on productivity in manufacturing and an export-oriented economy.

It is not the first time that the STI has to face the bear market and adapt to new challenges, as with evidence in the past few years it has managed to always bounce back stronger from past crises.

From 1987 to 2020, the STI has entered bear market territory a total of 10 times, which brings on average a period of downturn once every 3.3 years. It didn’t really tell much of a story though because a bear market is simply defined as a fall of more than 20% from the previous peak, which technically means you can play around within that 20% range in a nutshell but harder to predict a larger range.

For the past 33 years, the market has seen turbulence of varying lengths and severity.
I still recalled the days when the Asian Financial Crisis hits us because it was the year when my parents had to fly me over to Singapore and I had remained here ever since (events happened for a reason).
I also recalled the days when schools had to shut for several days (jumping in joy back then) because of the severity of the SARS breakout and schools had to take caution.
There was also the tech bubble, 9/11, Great Financial Crisis, European Crisis, China bubble, etc.
And then there was the Covid-19 this year, which one day will become history to us.
There will be light at the end of the tunnel as past histories have shown that past growth returns will come on strongly on average the next 2 to 3 years after a bear market.
Conclusion
The STI market is clearly an unloved territory right now – judging from the fact that it is the worst-performing market in Asia and investors are shunning the local market as much as possible.
Investors often forget that bull markets are born on pessimism, grow on skepticism, mature on optimism, and die on euphoria.
Chances are today the STI market is tilted more towards pessimism and this is where I think we can find some good accumulation point for some of the stocks listed in the market.
While STI may disappoint many investors in performance this year, it might stage a strong rebound as the dog of the market may prove once again that investing in a market that is near the bottom is likely to yield greater rewards when the economy opens up again.
Thanks for reading.
If you like our articles, you may follow our Facebook Page here.
You may also follow our newly created Instagram Page here.

9 thoughts on “Will There Be Light At The End of The STI Tunnel?”