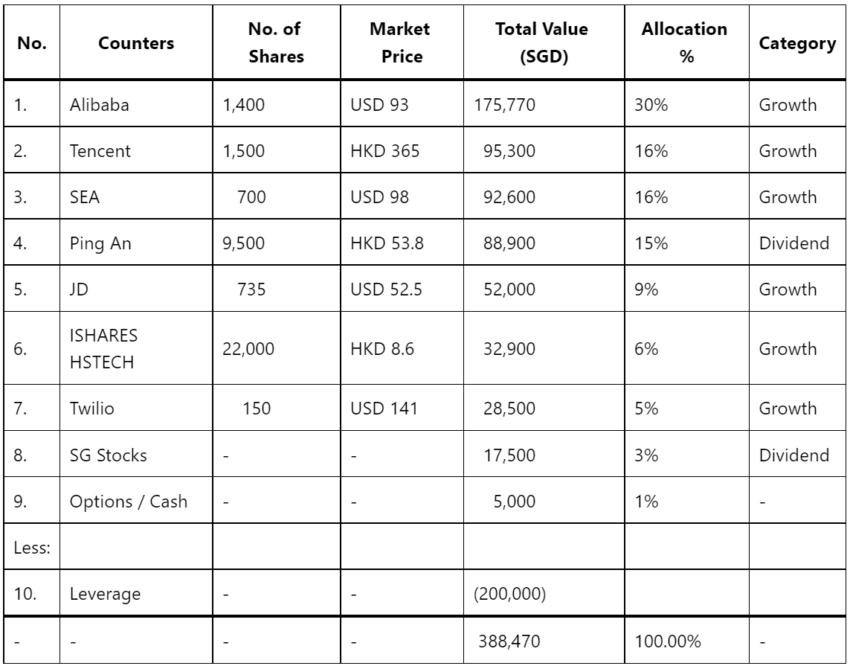 I’m going to do an early update to the portfolio for the month of March as it is the start of the school holiday next week and our family will be going for a cruise trip round-about to spend the week.

This has been a torrid horrible month for most of equity investors as the war between Russia and Ukraine escalates and send the market plunging down lower. This reminds me back in March 2020 during the low of Covid when my portfolio plunged by as much as 30-40% month on month before recovering the following month soon after that. I believe we are no different and the only difference is we do not know when the recovery will takes place (just like most other events in the market where this is an unknown).

The tech stocks were one of the sectors which were impacted the most – given either by their lofty valuation prior to that or simply just a risk-off environment where everyone wants to be “out” first before re-entering when things are more stable. The Chinese tech stocks were not spared either and together with the Russian and some of matured European markets were one of the worst performers so far this month.

My own portfolio was not spared either – the portfolio dropped ~ 24% from around $511k in previous month to a low of $388k this month. It’s unfortunate that it’s a bit of a reset and unable to make its new high for this month but I’ve decided to remain vested throughout this period as things will recover as they always are. It may need some time to get there but with the capital addition I am able to buy more each month, it’ll provide a nice entry point to start the longer term on the right notes.

This month, I’ve made a couple of changes to the portfolio and I understand some of the decisions may seem weird because these have become realized losses but here are my reasons.

Going into the war which impacted global markets worldwide, the sell-off were not limited to specific companies but all throughout most companies in general (with the exceptions of energy, oil and gold of course). As opportunities are abound relative and resources are limited, I decided to divest off my non-core holdings to make the switch.

These were companies which fundamentally were very cheap right now (and if I had more resources on hand I probably would have kept them on) but may take a longer time to recover (in general for most of the overhang surrounding Chinese companies).

The funds go into Twilio which I bought at the early part of the war and hence was caught by the global market sell-off and Sea Ltd (which I wrote about on another article). Sea investment was actually sitting pretty good right now as it is only slightly underwater right now and I had managed to earn a decent amount from the short position I took last month.

I am not going to lie – these are unsettling moments right now.

There are no corrections or bear markets that are easy to swallow – let alone an unprecedented few years we have with Covid and then war in the span of two years.

I know this feeling because I felt the same too back in 2008, 2011, 2015, 2020 and right now in 2022. These are not your proudest moment in terms of how you are feeling towards your declining networth and portfolio but as most things are, this shall pass too someday and you will look back on this as another tough moment that you’ve gone through in the stock market.

If there is one thing we as fellow investors could be mindful of – it would perhaps be nice to be more sensitive when commenting to another investors who are down at the moment. Things may look rosier and better if you are holding more cash at the moment but it has its own disadvantage when the table turns on the other side. Plus, from my experience, it is never easy even for someone with plenty of resources to allocate cash when fear is at the extreme and the world seems like it is going to end.

If there are things that we can count our blessings on – we should be grateful that we are discussing about first world issue rather than having to battle for lives for survival for most of the part where the war is happening right now. We can still live our own lives, be with our family, eat and sleep well, and go vacation with our families.

If you are in this privilege positions where you have benefited from the stock market due to war, or you think you are grateful enough to have kept most of your funds in cash at the moment, do donate to this Ukraine humanitarian cause through Red Cross where you will able to help millions of people there who are affected. This donation is not eligible for your tax deduction as it is made for an overseas cause.

I’ve personally donated a small sum myself (trust me, I am running out of resource and I could have bought a couple more shares with the money if I want to) and trust that every dollar counts and helps,

Meanwhile, stay strong mentally and feel free to write me a message through my email if you are feeling concerned. I’ll see you guys after I am back from my cruise the following week after.