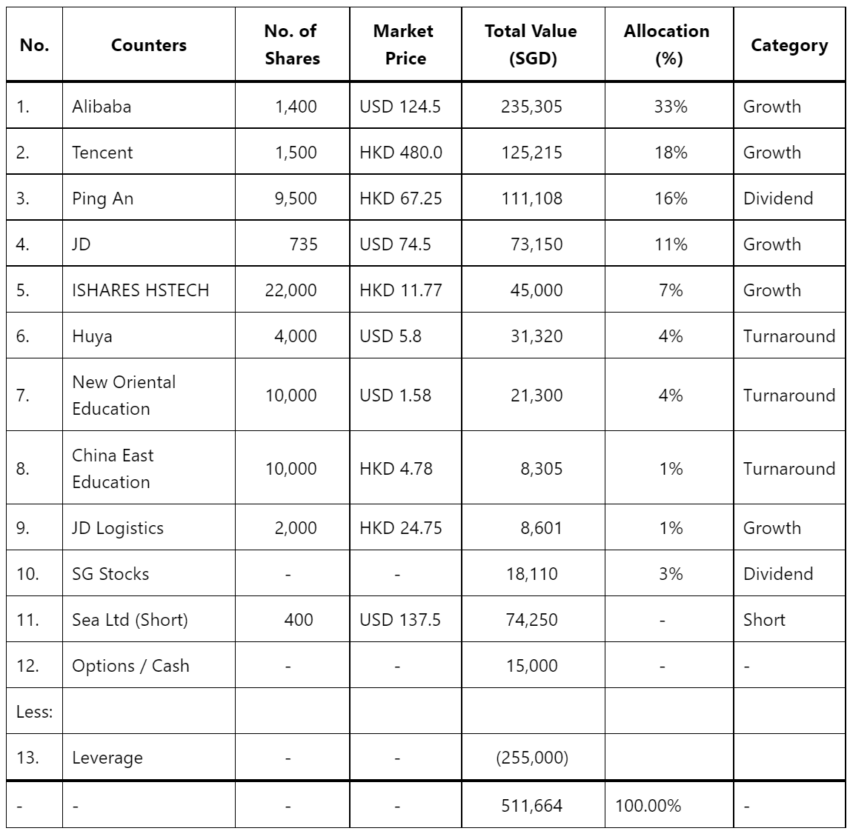 2022 has been a reversal of fortune as the bear starts to attack the US market, mostly the smaller and midcap in the tech sector which were hit the most.

Don’t get me wrong – my positions for most of the Chinese tech is still going nowhere in 2022, but if I just do a simple comparison, I think I am fortunate that it fares a lot better than most of my peers who have the majority of their positions in the US market and are currently down 30-40% YTD while some of the smaller caps are down as much as 60-70%. Basically, they had almost thrown out all the gains in 2021 and the majority of the gains in the 2H of 2020.

A quick health check-up across my positions still see me down by about 18% for Baba, 8% for Ping An and 15% for ISHARES HSTECH. The worst losses are in Huya (down by 53%) and China East Education (down by 27%). Thankfully, they are relatively smaller positions.

Tencent and JD are in green.

For the month of February, volatility continues to rock the market hard especially as it clashes with the earnings season and most companies are reporting their full year and giving guidance for the following year. As a result, we are seeing plenty of major movement +- 20% in the direction for some of the companies which have reported great Q4 but weaker guidance as we move towards FY2022.

This month, I added just a little bit more Ping An at around $65 when it managed to retrace back a few days ago. Fundamental thesis for Ping An remains the same where I believe they will start to report stronger transition in 2022 and from a technical perspective they do seem to exhibit higher low and higher high, probably indicating the worst is behind us. I’d be interested to see them reporting their full year numbers very soon.

I have also taken this opportunity to divest my smaller positions in Stone Co early in the month after volatility starts to rock the entire market. I was fortunate to be able to exit at around $16 after it hits resistance before it reverses the following few days after that. I have not decided if I want to re-enter this position given the many more interesting companies out there which have their valuation reset.

Last, but not least, I have also taken a short position for Sea Limited at the resistance which I covered in my previous article. The goal is to play this downtrend and their upcoming full year earnings on 1 March.

I also wrote plenty of options during this month and it has been a good bump up to the income stream that came in due to the volatility.

I am pleased to report a steady rise in the overall portfolio this month despite the huge volatility.

This is mostly due to the income received from writing options and also the better performance of the Chinese tech stocks overall.

I am eyeing on a few US shares which I have done some due diligence and would take a position when it is ready to do so. So far in my lists are:

Until these are met, it is probably more prudent to write for puts in the strike price I am more comfortable taking.

Like I mentioned in my previous Jan updates, I still do not think we are going to breach that EMA50 weekly support for the major indices.

Dow and SPY are near to the support and are re-testing it the second time while Nasdaq has quite a few more rooms to go down before it tests that EMA100.

Once this volatility is over (which I expect will be done with soon once earnings season is completed), we should be seeing a resume in the uptrend post that unless some major black swan happened in the world.