Advanced Micro Devices (Nasdaq: AMD) is one of the semi-conductor companies which saw a strong surge run in 2020, gaining close to 100% return in that year alone.

In fact, if we take a look at the semi-conductor company closer, we can see that the secular growth has started its run from as early as in 2018, where the company gains 79.6% and then a further 148.1% in 2019. The unprecedented Covid-19 situation we have right now accelerates the demand we have towards particular sectors such as gaming and Internet of Things (IOT) – which begs for faster and more efficient chips processor to accommodate for these things.

Let’s first take a look at what is the business model that makes this a strong company.

While the company once used to manufacture its own chips, the company no longer owns its own foundry and chooses to design its own chips and outsource its manufacture of the chips mainly to TSMC (Taiwan Semi-Conductor Company), the largest semi-conductor foundry in the world.

This works well to their advantage as the business model is much less capital intensive and they can focus on the research design and deliveries to their customers. For example, their NM processors are more advanced and efficient than Intel’s top end processors and this results in increased demand and pricing power. Because of this, you can see that their profit margins and free cash flow generation has improved considerably over time.

Below is a snapshot of their most recent Q1 2021 results which shows a much improved operating margin and free cash flow generating capability.

In fact, if you compare the competitiveness of the two processors in terms of both performance and pricing, they are neck to neck with one another. Browsing through various forums, it appears that Nvidia’s slight advantage is mainly in the deep learning super sampling (DLSS), which refers to an anti-aliasing method that smooths the jagged edges that show up on the rendered graphics. This allows them to train A.I models with high-resolution scans.

The gamers can probably attest better to this than me.

In the recent Q1 2021 results, AMD’s revenue grew by as much as 93% while operating income grew by 274% due to the higher margin. Earnings per share (EPS) grew to $0.45 per quarter, which if we annualized them at nil growth, we will get a full year EPS of $1.80.
This translates into a forward annualized PER of about 44x (you can expect this number to go down if they continue to grow their numbers which most likely is the case).
If we break it down into segments, you can see that the core growth is still coming in from the CPUs and GPUs, growing at 46% year on year basis and up 7% quarter on quarter. This is due to the higher demand from higher end processors used in gaming, laptops as working from home becomes the norm during the Covid-19 lockdown.
One thing which is talked less often but brought up during the recent earnings call is the demand for powerful processors used as a requirement for mining cryptocurrency which requires very powerful and energy efficient gaming processors, which are often stronger than the normal CPUs.
In the earnings transcript of the recent Q1 2021 call, CEO Dr Lisa Su said this about the company’s prospect:
” Against the backdrop of strong overall PC demand, our revenue is growing significantly faster than the market, particularly in the ultrathin, gaming and commercial segments. As a result, we believe that we gained client processor revenue share in the quarter. Our revenue share has doubled over the last two years as we have expanded in the premium products. In notebooks, we delivered our sixth straight quarter of record mobile processor revenue based on sustained demand for Ryzen 4000 series processors and the launch of our new Ryzen 5000 series processors.
Ryzen Mobile 5000 series processors revenue has ramped twice as fast as the prior generation. We expect continued growth in 2021 as the number of notebook platforms powered by our new processors is on track to increase by 50% compared to our prior generation.
In graphics, we introduced our Radeon 6700 XT desktop GPU with leadership 1440p gaming performance in March this year and are on track for the first notebooks featuring our leading-edge mobile RDNA 2 architecture to launch later this quarter. We expect Radeon 6000 Series GPU sales to grow significantly over the coming quarters as we ramp up production.”
Catalysts & Roadmap Ahead
If we take a look at the roadmap ahead for AMD, you can see that they are blasting gun ahead in all areas of CPUs, GPUs as well as Data Center – which will be key today as they are still predominantly dominated by Intel.
AMD’s next generation of 5NM chips which will be launched in 2022 is at least one generation away from Intel’s current plan ahead of the 7NM which management mentioned will be for the next 5 years .

If we take a look at the graph across all CPUs comparison, you can see that there is still plenty of room for AMD to take away Intel’s market share in terms of CPU and the shorter it takes for Intel to dominate. My guess is with Intel focusing on its own foundry now, they are looking to at least retain their market share through improving margins and more predictability of the supply. 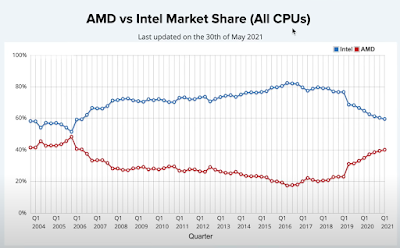 In terms of the desktop market share, AMD’s has leapfrogged Intel’s dominance by taking it over in late 2020 and the gap looks set to be widened over the next few quarters. 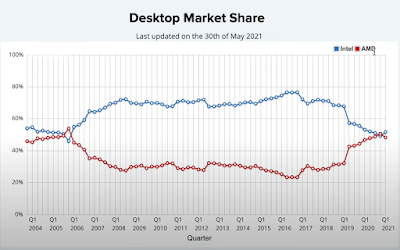 Next-gen popular game consoles such as Playstation 5 and Xbox are also very lacking in supply despite the launch in November last year. These consoles are using the semi-custom as well as EPYC processor sales which is now in scarcity due to the chips supply shortage scenario.
In its latest earnings call, Dr. Lisa Su said that she expect semi-custom sales growth to remain strong in 2021 and 2022 and EPYC processor sales to double by the end of the year as Microsoft, Azure, Amazon, Google, IBM, Oracle, and Tencent significantly expand their offerings with third-gen EPYC processors.
Perhaps, the most exciting of the lot is the competition with Intel over Data Center processors where currently its 3rd Gen “Milan” processor is stronger than Intel’s top end processor due to the superior memory performance through huge caches and superior per-thread performance with specialized dedicated SKUs.
AMD’s 4th Gen “Genoa” 5NM processor is only going to take that market share even much bigger and it will be interesting to see the graph moves exponentially over the next few years. 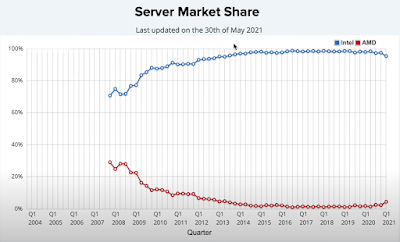 Below are some of the cloud and enterprise customers that are already using AMD’s processors for server. These include big brand names such as AWS, Alibaba Cloud, Google Cloud, Microsoft Azure, Oracle. 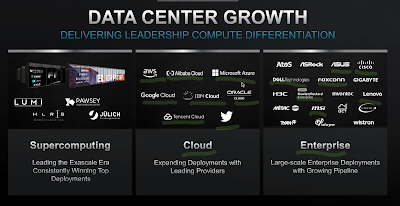