This past week, I added my exposure into the oil & gas sectors by buying the two big giants in the energy and oil sectors through Sinopec (HKG: 0386) and Royal Dutch Shell Plc.

Sinopec was added into the portfolio at $4 so they are currently on a small loss while Ive added RDS yesterday upon when there was announcement that OPEC+ failed to meet the production cut and oil plunged 10% from the news.

You can’t help when you see this sort of news that send most people running out of the door that gets me interested on the opposite end of things.

Oil has been in bear territory this year, dropping by more than 30% while most oil and gas company have dropped 35% to 40% from the start of the year.

But let’s put our focus on Royal Dutch Shell today. 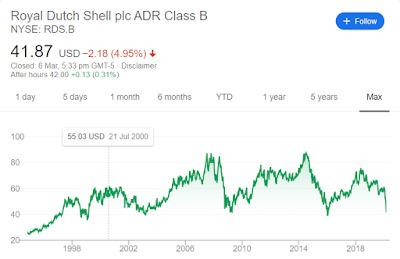 Based on their last Q4 performance, RDS reported an Non-GAAP earnings of $0.37 cents while GAAP earnings are at $0.12 cents. This result was mainly down due to an impairment which they did with one of their oil refineries which impacted bottomline earnings. Margins of course was also impacted due to the falling oil price which affects upstream segments.

The company continues to spend between $22b to $24b worth of capex during the year while free cash flow net capex stands at $20.1b in FY2019.

The company’s strong cashflow generating ability enables them to pare down their debts and also do massive share buybacks during the year which reduces the number of outstanding floating shares in the public.

The company has guided for Fy2020 outlook that capex spending will increase between $24b to $29b while they intend to maintain if not increase production capacity with free cash flow coming in at $28b to $33b.

The company also intends to pare down gearing from 29% to 25% by the end of this year, which shows the amount of strength in the balance sheet that they have. The company currently has $22b in cash equivalent and $57b in debts so we are looking at around paring down $5b to $8b of debts throughout the year. 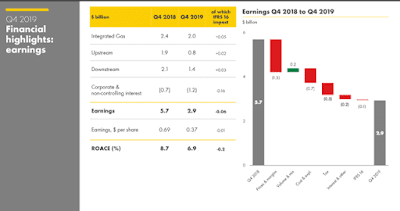 If we look at the segmental earnings closer, we can see that the upstream segment have been impacted rather severely coming in way lower year on year due to falling oil prices. The company’s cost base for oil is still at $30 so as long as oil prices maintain above that, they will do fine for the time being albeit with a lower margins.

The downstream segment continued to do well with providing support to other oil divisions within and outside the company.

RDS currently trades at a historical discounts of 8x PER forward earnings with close to 9% yield.

They are also the only major oil and gas company that are currently trading below their book value.

From a dividend yield factor, they are also the highest when compared to other major O&G companies such as Exxon, BP and Chevron.

BP is the other alternative strongest candidate because they offer closest when it comes to valuation and yield and the fact that they’ve recently raised their dividends means they are likely to be in the strong foothold but I think both would serve well if you are an investor looking for opportunity in this bear territory.

On a good bullish oil territory, the market typically re-rate RDS to be in the 14 to 16x PER so there is plenty of upside potential should oil turns its way upwards, which I think should generally stabilise in the $50s in the mid to longer term.

This means buying now presents an opportunity to capture the upside while we are being paid 9% yield to wait for the oil theme to play out.

It might continue to go lower in the next few days but I think the risk reward at this point should favor the long at this point.

I think that’s good enough for me.