The Trade War is escalating.
You can feel that coming as investors as you read the news that both Trump and Xi had continuously been playing a game of cat and mouse and it appears there’s no way both could get a mutual agreement that might compromise one another.
Last night was a bloodbath as Dow was down more than 600+ points while Nasdaq had fallen by 3%.
It’s pretty drastic in my opinion, but we are getting the hang of it with Trump.
Up 2% on one night, down 3% the next day, and then up another 2%, and then down another 3%.

Monday is going to be interesting especially for our STI index which is still at 3,110, and are still up by about 4-5% (inclusive of dividend) year to date.
Not cool at all given we want a bigger drop like the ones we’ve seen most recently in 2016, at the very least.
The year is still running with now being only August, so I’m hoping we’ll get to that stage where STI goes to as far down to the 2,500 range, which is the lowest on the 11 Feb in 2016.

The good thing about journaling everything in this blog when it happened is I could easily relate it back when I needed to relook back at something.
2016 was a lovely year for investor as the STI dropped 28.3% from the peak to 2,538.
The first day of trading in 2016 on the 4th January saw STI dropped to close the day at 2,835.
The media news were labeling it as “Black Monday” and I can understand why.
After all, we wanted to start the year fresh and exciting and what we’ve got is a massive plunge everywhere globally with the China Shanghai index in particular dropping 7% on that day to trigger a circuit breaker. HSI was also not spared as it ended the day at 21,327.

As an investor looking for bargain myself, I happily bought a few companies during that short stint where the market was continuously in red.
I mean, just look at the price of those companies below.
Who doesn’t want to buy OCBC at $7.95, or ST Engineering at $2.88, or Ho Bee Land at $1.95 or FCT at $1.89, or Ireit at 66 cents, or CDL at $7.29, or CCT at $1.31, or Keppel DC Reit at $1.02.
These are all companies that are seem brainless to accumulate back then on hindsight given the current valuation they are trading today but I can tell you that things are very much different back then with all the fear news lingering around, causing most people to wait until “the sky is clearer”.
There are also a few companies such as Kingsmen, Dairy Farm and First Reit which are trading at less today but we can mostly agree they are due to fundamentals of the company deteriorating. 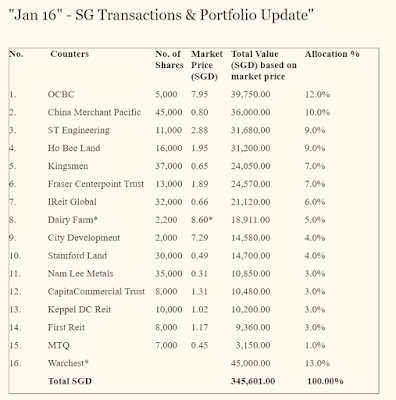 Most people was waiting for the market to bottom out but I was going a different direction by buying more each time the market went down and I had exhausted my warchest by the time the market goes into the 2500 territory.

Needless to say, the global market rebounded thereafter and my portfolio gained much from the earlier investment I had made when blood was on the street.

Even if the global market did not rebound on that particular year, I still had my savings and my dividends to add more to those companies over time.

I believe that the entry price was attractive and I believe the market was going to come good someday.

2016 was one of my better performance year as I ended the year with a 22.35% return.
It is also the start of the foundation where my portfolio accelerated quickly over the next couple of years and since then I’ve been waiting for something which has similar tenacity as that one. 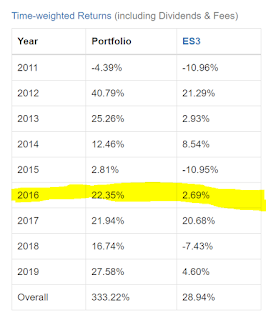 Here’s a few lessons that I learnt which might be useful to new readers.
In any bull or bear case, there are bound to be many naysayers and “gurus” who are trying to predict where the market will bottom. Unless you are a trader, I’d advise that you ignore these “noises” because they are likely as clueless as any experts out there in the CNBC or Bloomberg news.
Traders might be a bit different because they are taking a specific position with stop loss and a specific position to take profit, hence their angle of views might be slightly different with investors.
Don’t wait for the bottom because it might or might not hit and you might miss your chances on the up.
For as long as you see something which is priced attractively, do get into positions and slowly add from there. If you miss to catch the wave, you are likely to miss a huge chunk of your gains and might have to wait a few more years for that.
Typically, we’ll get about one small bear case such as the one we’ve seen above every 3 to 4 years.
Do concentrated investment.
It might seem that everything is attractive when you see blood on the street but go for the biggest meat that you are confident in and put a larger resources on it. I mean, there are no point when you can finally get OCBC at $7.95 but only allocate a small 1% of your portfolio on it. If you think is attractive, go for at least 5% position at the minimum. Anything smaller is insignificant to your portfolio.
Last but not least, continue spending time to analyse the prospect of companies and building up capacity in asset allocation as an allocator. This will payoff good dividends when you need it later on.
Thanks for reading.
If you like our articles, you may follow our Facebook Page here