Manulife Reit announced their Q1 FY19 results this morning which saw a 27.7% increase in Net Property Income (NPI) year on year due to the 2018 acquisitions of two buildings – Penn in Washington DC and Phipps in Atlanta.
This trickles down to bottomline DPU performance which grows slightly by 0.7% year on year to 1.51 cents (up 0.01 cent from last year same quarter).

If we compare this across quarter on quarter (Q4FY18 vs Q1FY19), NPI has actually slightly declined from US$25,491k in previous quarter to US$25,084k this quarter. There is a slight dip in the Gross Revenue by roughly the same amount, so there must be some small movement in the occupancy during the period.
The net income is also not comparable quarter on quarter because there’s a fair value adjustment in Q4FY2019 (end year) which results in a higher fair value gain. But this does not affect the cashflow so you can see distributional income remains comparatively possible to compare.
DPU is also lower this quarter at 1.51 cents as compared to last quarter at 1.54 cents.

If we have it annualized based on current DPU quarter, we’ll get a conservative 6.06 cents full year, which translates to about 6.9% yield at the share price of 87 cents.
I say this conservatively because there’s a few passing rents that are below the market rate that are up for lease renewal soon.
Apart from Michelson in Irvine, which I highlighted in my previous Manulife Management meeting (Link here) they are above the market rent, and Hyundai leases renewed back in Jan is one of them, the rest seems to be under-rented, in particular Buckhead and Midtown Peach Atlanta which has potential for positive rental reversion in the next coming lease renewal.
This is the organic boost the management is looking to bring value to their trophy class properties.

In terms of balance sheet gearing and growth strategy, they remain in line to purchase another acquisitions which is yield accretive that can boost their overall AUM. These are likely in Dallas, Houston or Pittsburgh area where the cap rates are slightly higher, making it easier for yield accretive target.


Management has also reiterated that interests cost will drop in the following quarter upon the refinancing of the Figueroa’s loan due to the delay in interest rate hike in the US, so the Reits should also benefit from the lower cost of borrowing.


The management has also put up an interesting slide on the tax structure in the presentation that highlighted the tax benefit structure they have on the Barbados partnership which tax interest income on intercompany loans in Barbados and principal repayment not subjected to tax. The Reits structure is also such that they are not subjected to 30% withholding tax on the interest and principal on shareholder’s loan. 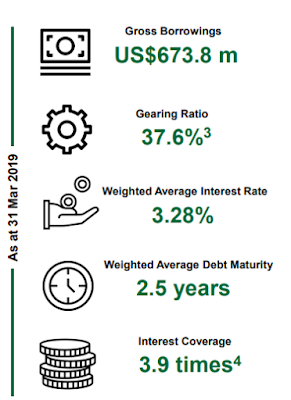 Overall, I think a decent quarter.


I like the fact that management has also been transparent and provided a lot of operational updates information such as the upcoming AEI taken to upgrade Figuera’s lobby and also their coming growth plans.