Ho Bee Land Limited is a property developer and investing company which has developments in various parts of Australia, China and United Kingdom, on top of their home base in Singapore.
The company recently announced their Q4 FY18 results which continues to be promising.
In this article, I will expand my thoughts on their results and also share some of the communications I have with their Investor Relations Executive Director, Desmond Woon.

P.S: The reason why I have only done up from 2013 is because their current business model started evolving from 2013 onwards upon the purchase of The Metropolis.
1.) Rental Income is up by 22.1% year on year and has grown to $179m vs $147m from the previous year.
This is due to the second full quarterly contribution from Ropemaker Place (25 Ropemaker Street) which they acquired on 15 Jun 2018.
Extrapolating this to full year, this means that on an annualized basis for FY2019 recurring income would have been at $51.5m x 4 quarters = $206m.
This translates into an EPS of 31 cents before deducting the corresponding charges relating to this.
This recurring income continues to be their spearhead earnings going into FY2019, with the 7 buildings in UK and 1 in Singapore leading the fray.
Singapore: Metropolis
UK: 1 St Martin’s Lane, 60 St Martin’s Lane, 39 Victoria Street, 110 Park Street, Apollo & Lunar House, Lombard Street, Ropemaker Place
2.) Residential Sales in Singapore continued to remain subdued due to the sentiments regarding the cooling measures in place and the company has only registered $17m sales throughout the year, which is about flat as compared to last year.
As of 31 Dec 2018, the company has approximately $184m of properties development that are held for sale in the current assets, so this year they only managed 10% conversion on the sale, which is rather slow.
Based on the outlook guidance, management continue to be pessimistic in the improvement of the sales development.
3.) Shares of Profits from Associates continued to do well this year due to its sales from the residential development projects in Shanghai and Zhuhai.
However, the losses incurred in their jv entities for their residential project in Tangshan in Q4 is causing some concerns. The company has attributed this to the lower profits but I suspect this might have to do with the way they do the revenue and cost recognition model in China.
The company received $71m as dividends from the $100m profits which was earned from their JVs and Associates. This translates to about 70% payout.
Based on Desmond, the company continued to focus their residential sales in China market.
4.) The company has continued to put their focuses in Europe when they enter into the European Property Fund II (CS Real Estate SICAV-SIF I) for about EUR 90M back in March 2018.
This appears as “Financial Asset” in their balance sheet line.
5.) The company’s Cash and Cash equivalents amount has ballooned to $176m from the previous year of $97m, while borrowings have also increased to $2,467m from $1,354m the year before.
The increase is mainly due to the funding they’ve undertaken to fund Ropemaker Place and also increase cash balance, which I am expecting they will make another acquisitions in FY19.
6.) The company has provision for a potential tax liability of $20.3m in Q4, which is related to a sale of Hotel Windsor back in FY13.
Based on my communication with Desmond, Ho Bee has been operating the hotel since 2000 and held Hotel Windsor as their properties for 13 years before it was sold in FY2013. The management believes this should be treated as capital gain which is exempted under the Singapore Tax Act but IRAS sees this as “trading” motives. ‘
Having said that, given that the company is already holding this for 13 years of period from 2000 to 2013, the company has already objected to the assessment raised by IRAS and believes under the ground that this should be treated as capital gain.
Desmond mentioned that the management has assessed the probability to pay for this liability is less than 50% but being prudent they have provision for it anyway.
If the objection appeal is successful, they would reverse this provision in the following year.
7.) Valuations for Hobee Continued to be attractive.
Their EPS have been very strong in recent times, driven from both the recurring rental and revaluation from their commercial properties. 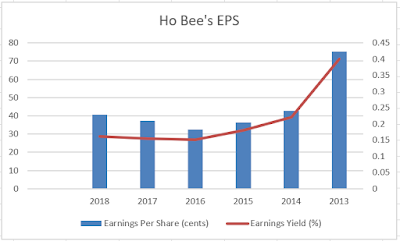 Dividends are at attractive 4%, so I will treat this as my 4% + 6% play based on my dividend strategy.
The latter 6% is still in doubt unless they can prove on the recycling part well and I’d prefer the other way round of 6% + 4% if it permits.
But I think all in all, it’s a decent play for a great assets developer with a great management. 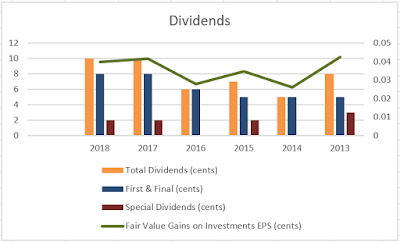