Comfortdelgro hits not only a new 52 weeks low last Friday but also a 3 year low. The last time they hit around this share price was around in Jun 2014. That was right before the contracting model announcement takes place for the public transport.
I just did a quick comparison to see how they fare in terms of earnings between the two.
It seems on a glance earnings was pretty much on par. While operating profit came in slightly lower in 2017, finance costs came in much better due to the lower borrowings they have (stronger balance sheet), hence overall profit was higher. If we just annualized the FY2017 earnings based on the half yearly, we’d get about $320m for the full year. That’s a big IF earnings had bottom already.

If we break it down by division, we actually don’t see a lot of difference with what they are 3 years ago. Public transport is evidently higher with bus and rail leading while margins are marginally higher. The taxi division is actually rather flat, with margins coming in at around 11.7%.
Based on the fleet size published from the LTA, it appears that 2017 has dropped to as low as 2011 and not 2014. So there are something to reconcile here. Perhaps it could be that utilization is higher or the revenue they charged is now higher. Given that margins are rather similar, it appears the latter is more unlikely. 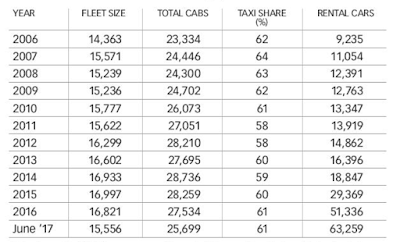 On Friday after market, LTA announces that SMRT had won the tender bid for the Thomson East Coast line with $1.7b over 9 years. That’s 30% lower than what SBS Transit has come up with their proposal. Given that margins are only hovering slightly less than 10%, I’m quite skeptical on how they can come up with the 30% lower tender bids. If we are an outsider, we’d never be able to come to rationale the major difference. Of course, one thing good about SMRT is they no longer had to account publicly on their financial statement. We also know who their major shareholders are.
The news will be huge for the media and analyst to over-exaggerate on the failure for SBS Transit for failing to get them. I actually think earnings wise this will not impact much in the short term. It’s a massive project filled with potential cost overrun. That’s why the government is taking the revenue risk for the first 9 years. A friend who worked in SMRT once told us that it’s not easy to make money on the rail. There’s a lot of surprises that will hinder the forecast.

Meanwhile, the slide will continue and probably compounded with even more bad news for CDG.