I’ve been in a rather busy and heavy month transacting a few recent buys and sells. I’ll consolidate my purchase and sells in my next portfolio update shortly.
Today, I’ve added 40,000 shares of Far East Hospitality Trust (FEHT) at a price of 59 cents into the portfolio.
My original intention was to accumulate more CDLHT shares but on second thought as it is currently already my top position, I wanted to diversity a bit within a different company with a slightly more concentrated Singapore portfolio but still within the hospitality industry.
My thesis on betting big on the hospitality industry is on the belief that the sector will bottom out in 2017 this year and start rebounding on an upcycle from FY2018 onwards. While it is not urgent to get into the sector right now (I’ll explain why later), I wanted to accumulate in 2017 where I believe they will continue to see sector performance weaknesses.

When I wrote my article for CDLHT (Link Here), I believe that revpar was close to bottoming as it is currently only a few percentage point from where we see during the gfc. Demand has not been much of a problem in recent years but supply is so that’s where we find problems with equilibrium.

2017 will see a continued pressure on the sector as there were some hotels that were slated to open in 2016 that has been delayed into 2017. We’ll continue to see massive expansion of hotel room supply this year as revpar will continue to decline.

The Singapore Tourism Board is forecasting a 4% growth in demand while they are projecting 6% growth in supply in 2017. Simple economic theory will tell us that equilibrium will move to the left side and pushes revpar down.
The key play here is to look beyond this year and start to look from next year onwards when STB projects demand to grow by 4% but supply grow by only 2%. I think that’s where we could potentially see a rebound in the revpar. 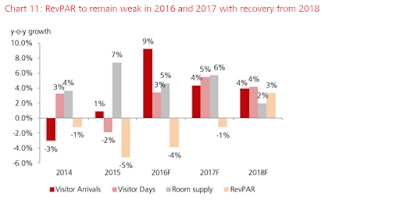 I don’t think any investors have been impressed by how this company has performed since they have gone IPO in 2012. To be honest, neither have I been.
The share price has gone on the trend down in spectacular fashion and it has not rebounded since then. 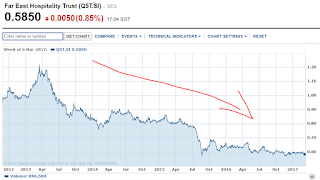 To be fair to them, they’ve gone listed on times where the hospitality sectors were undergoing difficult period so it is almost impossible to grow organically through increased NPI.
The management has been doing asset enhancement initiatives on a couple of its properties but it has not helped to mitigate the losses from the falling revpar and occupancy rate.
FEHT has a rather strong balance sheet and people I know are calling for them to acquire properties and grow inorganically to support the DPU. I thought a lot about the reason why they are not doing this and the only reason I can think of is that the management might need a lot more money to fund its acquisitions from its sponsors and it warrants funds not only via debt but also placement and rights issue. The problem with the latter is of course with the share price languishing on the low, it might not be a good time to issue units on the cheap and yet achieve yield accretive acquisitions at the same time.
I suspect they might just want to wait for the sectors to rebound before looking at any further inorganic acquisitions to make. In any case, the properties are from the sponsor so it’s left pocket right pocket.
If I could summarize my whole thesis on the reason why I decide to purchase this company, it would be:
1.) FY18 sectors rebound with demand outweighing the supply (FY17 bottoming out);
2.) Completion of Village Hotel Sentosa in FY19;
3.) Terminal 5 and Project Jewel completed in FY19.
4.) Decent debts headroom to gear up when times are right;
5.) P/NAV – Strong investment properties appraisal value despite falling NPI
The main risks that I could think of in my head in terms of the ranking:
1.) Management execution relatively unproven;
2.) Faster than rate hike increase – What this means is not only interest costs is higher but the discount factor for WACC is also higher which in turns will impact appraisal value of their investment properties.
FY16 dividend comes in at 4.33 cents (7.4% yield) and my projection for FY17, FY18 and FY19 would be at 4.20 cents (7.1% yield), 4.45 cents (7.5% yield) and 4.70 cents (8% yield).

From volume support, do lookout for the 58.5 and 58 cents support, it’s massive and holding on extremely well in relation with it’s daily volume. I think we might see a bottom at this range of the share price. 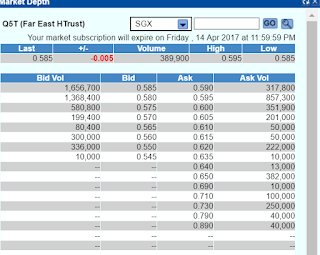 I think it’s a decent play in the next few years to come on this sectors.