I do these catalysts play once in a while.

The last time I did this was with Noel Gifts which went pretty well.

The idea is to ride on the catalysts ahead which I think there may be further upside to share price and gain from it. Of course, if it doesn’t play out well, then I’d be staring at the dark sky. Pinpoint accuracy in reading their financial statement, studying their recent development and forecasting future outlook will be key in this one.

Spackman Entertainment Group Limited (SEGL) is a leading entertainment production company that is primarily engaged in the independent development, production, presentation, and financing of theatrical motion pictures in Korea.

Below is the structure of the company’s overview: 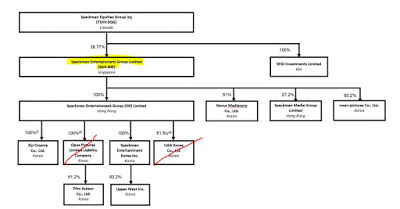 One of the Group’s main gem is Zip Cinema, one of the most recognized production labels in Korea and has originated and produced some of Korea’s most commercially successful production. For instance, movies such as “The Priests (2015)”, “Cold Eyes (2013)” and “All About My Wife (2012)”.

The Group is also a strategic shareholder (27.3% interest) of Spackman Media Group Limited (SMGL), a company which is now incorporated in HK. SMGL is a leading talent agency and entertainment content production company in Korea, collectively managing 50 artistes including some of the top names in the Korean entertainment industry such as Son Ye Jin. Through its wholly-owned subsidiary, SMGL owns a 51% majority stake in Breakfast film Co. Ltd, a leading marketing and media company and a 99% interest in Demedia Co. Ltd, a leading variety show and entertainment program production.

Catalysts (Why I am buying)
There are a couple of catalysts which I am awaiting for them to crystallize:
1.) On April 2016, SEGL announced a proposed restructuring of its loss making assets pursuant to which the company would sell its entire 100% equity interest in Opus Pictures Limited and its 51.5% equity interest in UAA Korean Co. Ltd. The divestment has just been completed recently.
The restructuring will allow SEGL to streamline its core operations and better focus its resources on its better profitable production in Zip Cinema and Novus Mediacorp. The restructuring will also enable them to save an estimated overhead costs of around $2.5 million (by working backwards) and I calculated that it will bring them back to profit in FY2017.

2.) The company is also releasing major hit blockbuster in Dec 2016, a movie titled “The Masters”.

Since the company is listed 2 years ago, their released movie have been rather lackluster. These were mostly produced via Opus, which thankfully they have divested now.

One of the decent movie is titled “The Priests”, released in 2015. From here, I am able to use the margins as a case study example.

The idea with the movie production business model is they earned revenue not only from the production of movie, but also through distribution of the movies to regional countries and earned the royalty from the distribution, rights and documentary sales.

If they are successful, they are able to earn a gross margin of around 50% which is extremely decent.

Unfortunately, not all movie can be a blockbuster so if the movie doesn’t appeal, then the company will be in loss making position or if slightly better at a low single digit margin for most of the time.

3.) The third catalyst is the likelihood to divest Spackman Media Group Limited (SMGL), a leading talent agency and entertainment content production company in Korea, collectively managing 50 artistes including some of the top names in the Korean entertainment industry such as Son Ye Jin.
The company’s stake in SMGL stands at 27.3% and may be worth at about $45 million.

Management has already guided that they are in a talk with a potential private equity investors who are looking to take a stake into SMGL.

One of the main risk with the business model is they require huge capital commitment upfront to make and produce the movies. I’d equate this to something similar to developer’s model. Managing working capital would be key in this one.

The other risks is with the key-man risks.

A good movie production is usually credited to the top producers, who will be key in retaining their services.


Then there are also the industry and business risks with competition and low entry to barriers.

This should be a short term play for me until the catalysts are played out.

Only then I’ll be able to see if the thesis proves to be right.
At the moment, the company is still making losses, so it’s hard to put a valuation up there.

If they can return to the black (which is my main thesis), then we’ll start looking at what their valuation might justify. Some of the peers are trading in at about 40x earnings and that’s how high it can go in terms of the industry.

I’ll check back on how I am doing on this.