This is my first quarterly results coverage review for CCT since I’ve been vested in the counter a couple of months back.
The trust recorded a 2.6% increase for the quarter in the distributable income year on year, which translates into a 2.4% increase in the DPU to unitholders (which is approximately at 2.14 cents). This is pending the confirmation on whether there will be conversion on the CB which is currently priced at $1.54. Since current price is under the money, it is unlikely that these bondholders would choose to convert, unless they want the higher yield distributed via the dividend than the interest they are getting, but the chances are rather slim.
Overall portfolio occupancy of the trust’s premises remain higher than the average market at 96.4% (compared to 95.8%) and they have a well spread portfolio lease expiry profile with major leases expiring 2019 and beyond. There are also very minimal leases expiry in the next 2 years which becomes very important to the company as the sectors is undergoing a down cycle heading into the next few years. What this means is there will probably be minimal impact to the NPI which then translates into a stable DPU for unitholders. If you zoom down into 3 of their largest assets, you can see that they have committed rents for leases at an average of above $10/psf. I think this will ease the tension down for shareholders who are reading news that the core grade A market has dropped down massively from the top due to oversupply environment.

I recalled back when the Euro crisis and oversupply situation hits the office sectors back in 2011/2012 and the situation is exactly the same as what we’ve seen today. The truth is the sectors cycle move up and down, and in the down scenario, I don’t think we are going to see a very inelastic movement for demand as leases for office sectors are usually locked in for at least 3 years or more.
If we take an annualized scenario of what happened back then in 2011, you can see that DPU has dropped down to 7.52 cents. It is down but I don’t think it looks extremely bad to be honest. As an investor, you probably will receive the dividends and assess the performance of the sectors again, so you’ll arrive at another conclusion by then. 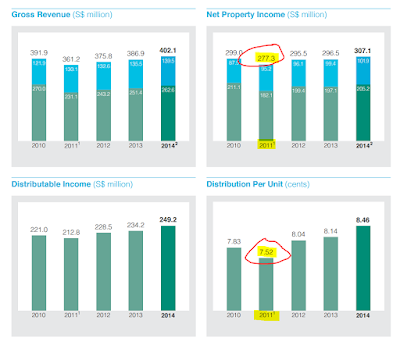 In terms of financial management, the management has also been very prudent with managing their debts. Their gearing remains low at 30.1% and their interest coverage ratio is very stable at 7.3x, which indicates their ability to pay off the debts using their lease income. The average costs of debt is also relatively low at 2.4% currently, though this is set to increase as the company do refinancing at a higher cost due to rising interest rate environment.
There are one notable big block of financing that is due in 2016, which is the RCS fixed notes issued for the Raffles Office Tower at 3.09%. Other than that, the rest are pretty much on schedule. On a sensitivity risk, a 50 basis point increase in interest rates will affect 0.04 cents DPU on the bottomline. I don’t think that causes any major concerns for now. 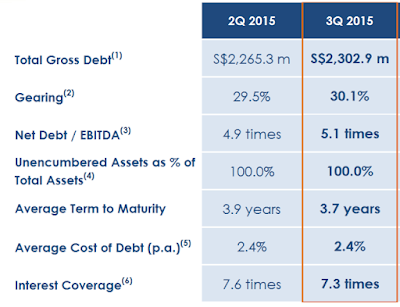 I am actually pretty bullish on the company over the long run.
I think the management has shown over the years that they are able to manage their assets well and have proven strong to grow the company over time since inception of the company.
It is relatively impossible to get CCT at a cheap price if the sector is not undergoing headwinds so for me I think it is a good match in heaven since I like to buy when others are avoiding.
I also prefer the office sector more than the hospitality sector because the latter are often dependent on shorter lease (short travel). For office sectors, the cycle goes up and down but the leases are usually contracted over a number of years upfront, so we don’t usually feel the impact to the bottomline as much as the hospitality sectors.
I’ll be looking to add onto the counters should there be chances to do so.