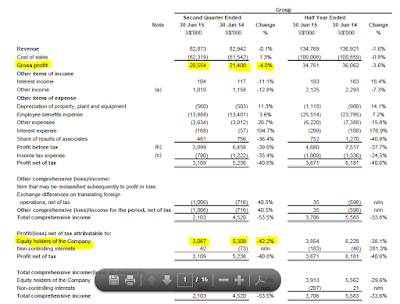 Kingsmen Creative had recently announced their Q2 FY15 results and I used these opportunities in recent times to average down on the shares after maidenly buying their shares about a month ago (you can view here). I added 21,000 shares at an average price of $0.91 into my existing portfolio during the last couple of transactions after the share price seen some weaknesses.
The Q2 results are disappointing for sure, with revenue segment, especially for the Retail & Interiors segment taking a big hit, with luxury sectors taking a slowdown globally. The Exhibitions and Museums remain the highlight for the company’s business, especially after Singapore held their 28th SEA Games and a couple of new themes coming up such as the Kidzania concept up and coming in Sentosa.
The management did concede that the bidding for the luxury segment was going to be more competitive in the future, hence they have decided to expand into the more affordable mid class segment in order to gain further footprint in the industry. I thought with their capability they should have done that long ago. Perhaps, the margins are lower in those segments.
Just doing a couple of updates here into the spreadsheet.
Gross Margin remains fairly strong and within the range while the overall drop is more due to the drop in revenue as mentioned above. The company has managed their cost control pretty well, and they will need to do so since their net profit margin at 5% or so means that they cannot take any margins of errors, especially with salaries being the main costs contributor.
Free cash flow remains highly in the red but that’s because they’ve purchased a building premise earlier in the year and not because their capex requirements are high.
The management has strongly asserted that the 2H would be much stronger, so I do expect the majority of the revenues to come in the 2nd half of the year. Interim dividends have been cut to 1 cents (from 1.5 cents) last year but you can see how the management is taking a very prudent approach when the first half is not doing well. 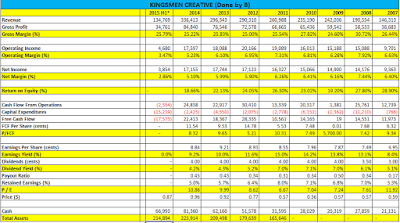