LMIRT has just announced their full year results this morning and it appears that the fourth quarter is doing pretty well. Sillyinvestor has done a very good job dissecting the figures especially for the projection of the newly acquired Kemang figures so I will just cover it very briefly.

There are 3 things that basically I wanted to highlight in this post:
DPU Projection
As you probably already know, there was an advance distribution of 0.55 cents prior to the placement for the period from 1 October to 16 Dec 2014. That is a total of 77 out of 92 days there for the same portfolio without the Kemang portfolio. Assuming without the acquisition of the Kemang mall, the distribution for the 4th quarter would be at 0.55 cents / 77 * 92 = 0.66 cents. That’s not looking particularly good there.
Working our way back at the actual distribution of 0.71 cents for the 4th quarter, we can assume that the Kemang acquisition has contributed 0.71 – 0.66 = 0.05 cents for the 15 days (92-77) left in the 4th quarter calendar. However, we need to note that this was not fully paid via internal funds but through a placement, so we will need to account for the bigger number of units outstanding here.
Using a quick discounting methodology, we will have an incremental 2,701,802,668 – 2,462,648,552 = 239,154,116, which is roughly 10.8% incremental from the existing number of units. Discounting the contribution figure by this, we should be expecting 0.05 cents / 1.108 = 0.04 cents. Pro-rating this to a full quarter contribution, we are potentially looking at 0.24 cents.
Before we add them together, we now have to discount the same estimated full quarter contribution from the existing portfolio at the same incremental rate of 10.8%, we will get 0.66 cents / 1.108 = 0.59 cents for the existing portfolio.
Adding the two together, we will have 0.24 + 0.59 cents = 0.83 cents for the full quarter moving forward. However, do note that some caveat applies.
1.) While accounting for the Kemang, we may have neglected the power of rental reversion which they have achieved in the new quarter. If so, we may have overstated our Kemang projection figures.
2.) The estimated 0.55 cents for the advance distribution may be understated given that it is only an estimate. Assuming we pro-rate them to a full quarter, they only amount a total of 0.66 cents which is ridiculously low.
Forex Translation Gain/Loss
The second thing I would like to highlight is on the forex translation.
There are many investors who put a lot of focus on this one.
As I had previously mentioned, the gain or loss on translation is very limited due to the currency hedging the company had in place. In other words, should the currency moves either way, the company will not be expecting a major upside so I will treat this as negligible.

Take a look at the one highlighted and strip out the one highlighted in red, and you get about 900K of positive income there. The one highlighted in red is due to the income from loss of Kramat Jati Indah Plaza so it should not be treated as forex translation gain/loss.
Occupancy Rate %
It’s pretty weird that their latest slides are missing the occupancy rates there.
I wonder if it’s done on purpose or something amiss is about to happen. It appears like they do not want to show the individual mall performance to the public. However, they did mention that portfolio occupancy is now at 94.7%, a slight decline from the 95.0% we last see in Q3. My suspect is the occupancy is going to trend lower especially on some of the bigger malls like Pluit Village. Binjai and Kramat are doing fine as they have a compensation from the loss of income mentioned earlier.

The Kemang acquisition is definitely accretive.
I’ve mentioned this in my previous LMIRT post and thought they could have squeezed a better deal by doing the placement earlier at $0.40 rather than $0.34. Nevertheless, this looks like a good deal that is going to contribute to the bottomline for the company.
Do note that due to the acquisition of Kemang partly funded via internal funds, the balance sheet looks very much weaker now than before. I am not only talking about the gearing in general, but the amount of cash available in the balance sheet to do any further acquisition or AEI. 100% of the assets are also already encumbered so I am expecting another placement/rights issue to strengthen their balance not very long as soon as there are opportunities to do so. 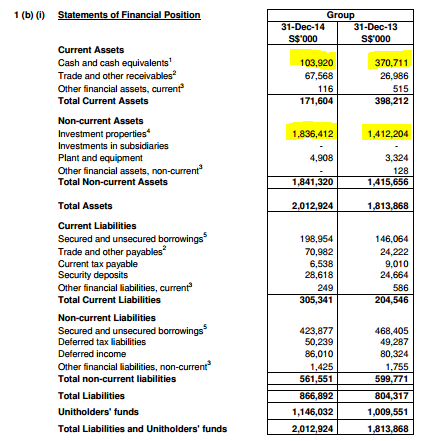 The current price is probably fair to account for the plus and minus of the company. Those who managed to get at $0.30 are probably sitting on a good safety there but at current price I don’t see why we should be adding further.
As always, I might be biased in my opinion, so please treat them with a pinch of salt.

16 thoughts on “LMIRT FY14 Results – Why are the numbers looking better?”