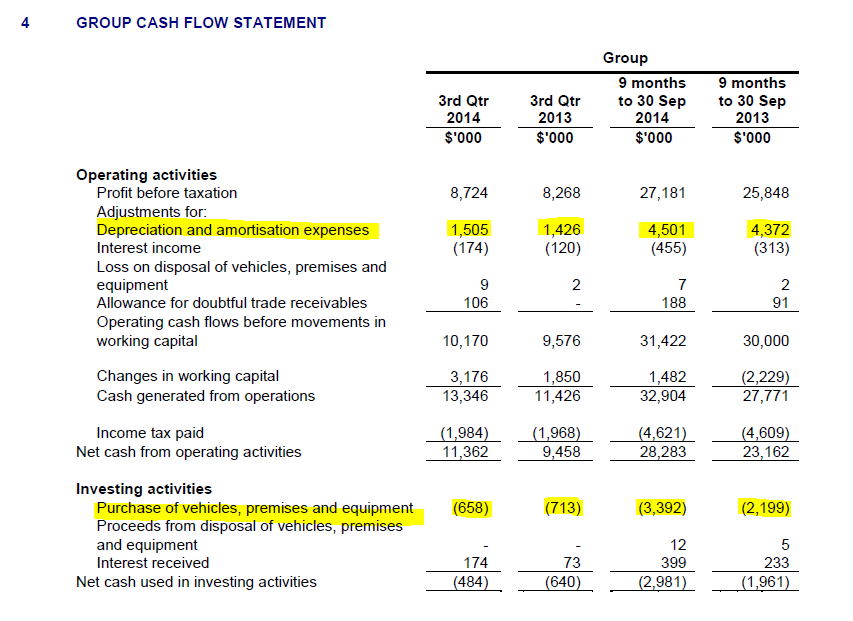 Following up on my previous valuation post on Sembcorp Industries, some readers have expressed their concerns regarding the much lower intrinsic value I have estimated for SCI using the DCF valuation model as compared to the other analysts’ estimates, who were mostly targetting the stock at $5+ to $6.
In the previous post, I mentioned that one of the reason is due to the much higher CAPEX i have put in the assumption over the next 5 years, which is substantially higher than what other analyst put in. Since I was discussing this with Kyith the other night, I thought it could be useful to explain in greater details why I did that and how things are going to change should the assumption was tweaked a little. This is going to be somewhat a lengthy post, but if you can stay on until the end, I promise that it will help you in understanding valuation a little better.
If you relook at the CAPEX figures I have estimated over the next 5 years, you would see that the amount have been substantial. The reason for that is because I have included the growth capex on top of the normal maintenance capex the company needs to sustain its existing business.
Growth capex is vastly different from maintenance capex in the sense that the former is an investment while the latter is a cost required to sustain its business. The key about growth capex is to make sure that the reinvested capital is earning a sufficient internal rate of return to justify the investment cost. In short, these are costs meant to grow the future business, which might or might not be included in the valuation model we have estimated.
Saying them is easy, but separating them accurately to incorporate into our model requires one to understand the business very well and this can prove to be difficult. Many times, they are somewhat blurred between the two distinctions.
There are of course a couple of ways we can intelligently separate the two from each other. One of my favorite ways is to look at its depreciation expenses. If you think about it, the tangible assets that the company owns are usually depreciated over 5 or 7 years using a straight line method depending on the nature of the assets. These expenses are assumed to be maintenance capex because they are assets that are required to sustain the company’s existing business based on their salvage value. However, to be slightly more on a conservative side, I usually take in 1.5x of the depreciation expenses to be maintenance capex. This is to buffer in case the company is using a different depreciation method that would underestimate our capex.

A good example on this would be Vicom.
I extracted out their latest Q3FY14 financial statement on the Cash Flow Statement that would substantiate my point above.
In the case for Vicom, the depreciation expenses for the 9 months is $4.5m while the Capex is $3.4m. Since it doesn’t make sense for the maintenance capex to be higher than the total capex, we will assume that the total capex reported is related to maintenance capex. In this regard, I would input my capex to be $3.4m into the valuation model.

In the second case study, I extracted out the same Q3FY14 financial statements for SCI.
You will see that in this example, the depreciation expenses for the 9 months is $230m while the Capex incurred is $963 million. In my valuation yesterday, I obviously took in the whole lump sum capex which includes both the maintenance and growth capex. However, if we were to separate the two based on my logic above, my annualized maintenance capex for the year should be estimated to be $460m ($230m x 1.5 x 4/3), which is what most analysts are estimating at. 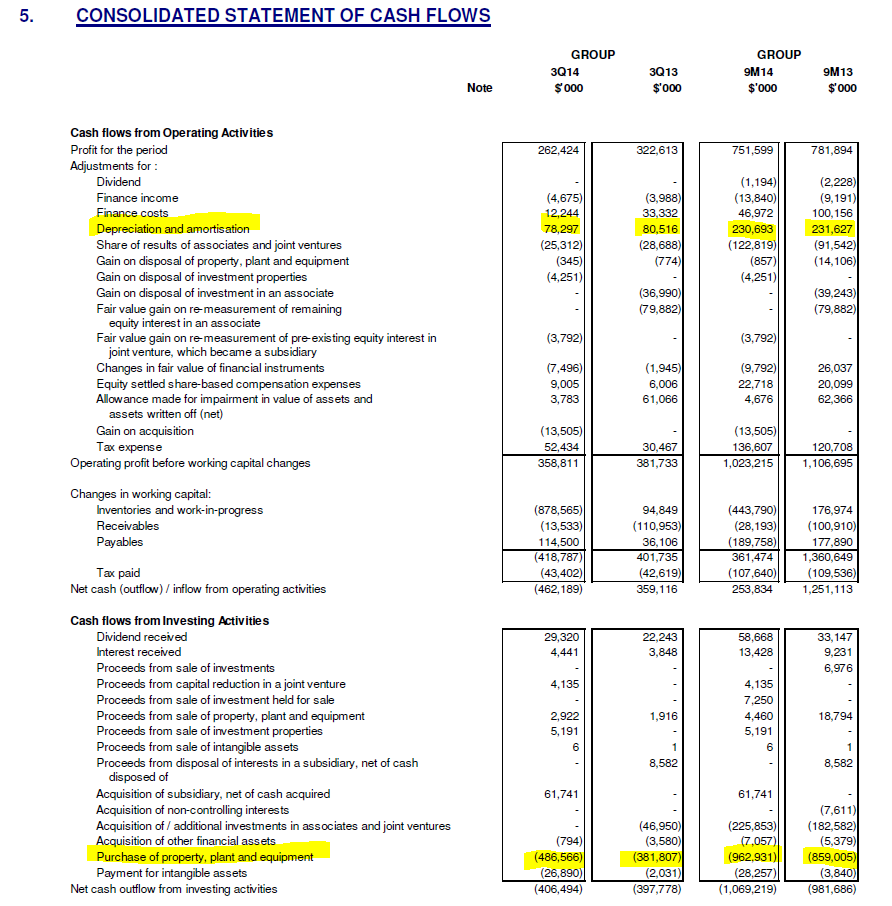 To put this figure into our valuation model and assuming a 5% growth in tandem with the profitability, we now get a much better looking unlevered cash-flow figure than the one we did yesterday.

Greenwald has another way of calculating the maintenance and growth capex, if you are still interested at this point in time. It is always good to consider what is best for the industry and no harm looking for different ways to estimate them.
Based on Greenwald, he uses the Average Gross PPE divided by the sales ratio for the past 7 years. He then multiplied this figure by the subsequent projection growth on sales to arrive at the growth capex. The maintenance capex is simply the difference between the total capex less growth capex.
The Greenwald is a better method to compute the maintenance capex but suffers from companies with inconsistent and lumpy growth rate.

At this point, you’ve probably realized how different can your intrinsic value be based on the different assumptions you’ve made. One simple assumption to take out the growth capex could have a big difference on the intrinsic value.
Maybe at this point, the SCI investors will not be so worried looking at how much is the company valued at. At least, it’s better to be more conservative than not.

2 thoughts on “Maintenance vs Growth Capex”