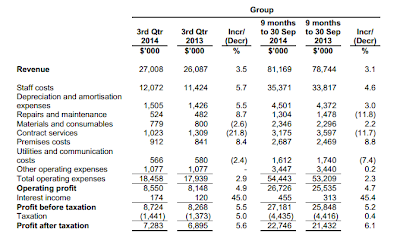 My last previous posts on Vicom was in October when I elaborated in detail about their two core business: vehicle and non-vehicle segment. You can check out the posts here at part 1 and part 2.
Vicom announced its Q3 results today and as a vested shareholder myself, I am keen to know how they were doing in the midst of all the challenges coming up.
Not surprisingly, the results for Q3 are pretty much similar to the two previous quarters. Revenue are up by low single digit while bottomline increases by about 5.5%. They probably need to watch out the rising costs, especially the salary and repair costs, since revenue seems to be muted at this point in time.
The results should not be surprising for most vested investor as I have highlighted some concerns previously with regard to their vehicle business moving forward. The vehicle business still ultimately contributes the majority share to the bottomline so any slowdown may impact their profitability.

The news that came recently regarding LTA setting a lower growth rate to 0.25% (formerly 0.5%) from Feb 2015 to Jan 2018 did not help Vicom either. This just means that their profitability for this segment will be somewhat muted moving forward. The key now is to grow the non-vehicle business in Setsco so that they can offset the muted growth in the vehicle business.
9 months EPS is currently at $25.28 and the estimated full year EPS will come in at around $33.36*. You can see the growth has somewhat slow down by quite a bit. Vicom has a policy of increasing its dividends and I don’t see that changing anytime soon. I estimated dividends to increase to 23.5 cents this year, which represents a 70.4% payout ratio.
Cash and Cash Equivalent would have increased to about $85 million at the end of this financial year, representing a record high at more than 50% of the overall asset value. CAPEX amount has been ramping up this year as well, possibly due to growing the non-vehicle segment of the business. Net FCF, after deducting CAPEX from the Cash Flow from Operations, have been relatively healthy – which leaves the amount of dividends to be paid sustainable even without any increase in growth.
Possibility of what Vicom can do

Given the slowdown in the inspection business due to slower vehicle growth, along with the increasing deregistration in the next few years, it is inevitable that the management will have to think of ways to grow the business. These are few that I can think of:

1.) Increase price of inspection
As part of the regulatory mandatory requirement in Singapore, inspection of vehicles have to be performed at year 0, 3, 5, 7 and 9.
According to the annual report, the company has not raised prices for its inspection services since 2006. This is possibly one avenue where the company can grow its revenue if car growth rate is muted. Hey, idea there!!! Just don’t blame me if it happens.

Vicom currently owns 7 out of 9 inspection centers in Singapore. Based on my previous post, I estimated the market share to be at 74.3% (519,943 / 697,870).
STA, the other two centers, is part of a subsidiary of ST Engineering, under Land System business of the ST Kinetics.
Given that the automotive segment is not doing particularly well for them based on their latest results, in addition that the management would like to refocus on their strategy, they may be willing to let go  and Vicom may be willing to buy them over given their huge stack cash.
3.) Growing Setsco Business
This is probably the most feasible solution to grow their business beyond the traditional inspection business.
Already, they have set up a consultancy service in Singapore. Outside of Singapore, they have set up an office in Malaysia for their Setsco subsidiary. Based on Comfortdelgro annual report, Setsco have secured a structural monitoring project for Petronas Twin Towers in Kuala Lumpur. Under the contract, Setsco deployed seismic sensors with the Global Positioning system to monitor both the static and dynamic characteristics of the Twin Towers remotely and in real time.
There are news that they may be expanding to Vietnam and we will see as we move along whether this will materialize.
Conclusion

This is a rather stable company as we’ve seen from the business model despite the slowdown. It doesn’t have crazy growth like what analyst have been valuing for Super or Osim. The management has also been prudent about paying out their dividends sustainably over the next few years. Growth is slowing down but the management is keen to grow its non-vehicle business. The cash should size up really big over the next few quarters and I probably want to see them invest more in CAPEX as an indication that they meant business. Other than that, this will be a slow paying dividend counters that have been pretty consistent thus far. Probably will stay vested and treat this as a long term fixed income unless a good opportunities pass by.

2 thoughts on “Vicom Q3 Results – A Darling stock that only goes up?”