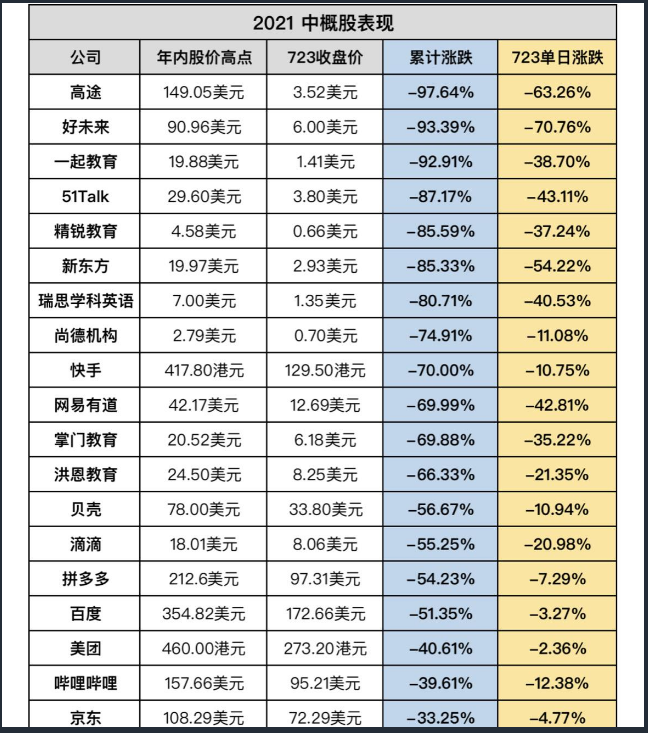 On Friday last week, investors investing in China education stock received a huge shock after major financial news reported further restrictions to the education tech sector bringing in further rules and regulations in order to curb the economy plan of the country further.

This has sent over major big cap names plunging heavily down on the day, and this year alone they have gone down 85% – 97% from the peak.

Just take a look at how the top 6 losers performed in 2021 and it will send every investors shivering thinking about investing in China market.

I’m just going to go through the context briefly here as I believe it has been widely covered by the media and other financial bloggers.

The entire idea of why the government is clamping down on each sensitive sectors, in particular the education sector in this context, is due to the fact that the government is trying to enforce growth in their birth rate after seeing major decline on an older population over the last few years.

In fact, just a few months ago, it has enforced its birth policy – 3 child to encourage the younger population to have more children. However, as we know in today’s context (not just in China), parents are burdened by the increasing cost of living such as housing, education and healthcare and hardly have rooms to feed both the upper and younger generation, let alone thinking about having more children. The economy success which China has experienced over the last decade has its own tolls to the population for the lower and middle class tiers.

The education sectors have for many years enjoyed the benefits of this controlled sectors and we have seen increasingly more tuition and activities being scheduled in each of every child’s timetable after school in order to beef them up against their peers.

In fact, most educational centres targeted the 6 – 18 years of age (the category under K-12) as China’s regulation prohibited listed companies from investing in for-profit kindergarten using funds derived from the capital market. As such, the K-12 after school tutoring then becomes the biggest meat where education centres can extract the maximum value out from.

Needless to say, the media blew the entire thing out of proportion more than they need to (as usual).

Investors were so scared that the dump on Friday was extremely massive that it created a gap mismatch which I will talk about more in detail later.

Not to get this wrong – there is still a fundamental change to the sector with this news, but it may have been punished overly excessively.

Let’s take a look again at the details of the published content:

(My Feedback: This is similar to the restrictions previously done to gaming of teenagers not being allowed after 10pm. which they are using the face scanner as a stick measure to comply. Personally, I think education centres can work around providing other values on weekends and holiday which will increase the overall well being of a person rather than focusing on core subjects)

(My Feedback: This only applies to K-9 core subjects which the company can spin-off its business and focus on other core areas. It is still a hit to the company but they are likely to innovate, transition and will not die from here)

(My Feedback: This will reduce competition as most of the smaller companies focusing on K9-K12 core subjects tutoring are likely to close down)

(My Feedback: Since the playing field is now levelled, it will only reduce the operating costs for the entire sectors in the future)

In fact, one important details also which I think is important to highlight is that the policy will first be implemented in a few big cities such as Beijing and then resynthethised upon feedback.

So are these publicly listed companies going to get impacted?

Hell yes, in fact they are already down between 85% – 97% amongst them and are barely left with almost nothing.

But are these stocks going to zero?

I don’t think so.

I’ll use New Oriental Education as part of the case study numbers.

Pursuant to the Amended Private Education Law and the Draft Amended Implementation Rules, training schools, in particular those providing K-12 after school tutoring services, shall obtain the private school operation permit if they want to operate the K-12 for profit organizations. So the law enforcement is already there from the start.

The net revenues derived from K-12 After School Tutoring, test preparation and other courses in 2020 is massive at US$ 3 billion out of the entire US$3.5 billion. The operating costs made up a total of US$2.25 billion, giving them a net margin of about 25%.

The allocated assets they have for the K-12 AST, test preparation and other courses amounted to US$3.6 billion while the rest of the US$1.4 billion goes to the rest. Spinning this off will be an interesting exercise as it makes up the bulk majority of the revenues and assets.

Deducting the net cash of US$1.2b they have on the book, the enterprise value of the company is valued at $3.8b at the moment.

Taking in the worst scenario case of nil revenue coming in from the K-12 after school tutoring, test preparation and other courses, this gives the company at a multiple of price to sales of 7.7x. It’s unlikely that we go straight down this path for the time being as I think there will be unintended ramification along the way that might upset a general number of population so I think there will be details along the way that might serve this segment a little better than our worst case scenario.

What about delisting risk?

Delisting from major exchanges at the moment is not the main concern as they can still trade via the OTC if need be, albeit with much lesser volume. In any case, the goal wasn’t to suspend the entire China companies from obtaining foreign capital so I don’t think this will be a risk only to this sector but all sectors in general.