Earnings season is finally over so we are back to this muted season where the share price is just gyrating along with the overall trend of the market.

I've made a few changes to the portfolio with the objective to get a higher yield and a lower risk or one of the combination of the two.

The portfolio is constructed to capture both defensive profiles and stability of the cashflow, as dividends remain an integral part of my life now, especially given my "loss of income" in the next few months.

So first things first on the divestments.

I've divested two of my Reits - Fraser Logistics Trust and Far East Hospitality Trust, both yielding 6.2% and 6% respectively which I feel valuations have stretched based on their historical perspectives.

I've blogged previously on FLT divestment (Link Here) which you can find here and I feel it'll be a good holding in the long run, I just need some retracement back to the valuations where I can load them back.

The same goes for Far East Hospitality Trust where the yield is now back to 6% and with a gearing near 40%, there might be chances to load this lower. Operationally it has done well and should continue the trend in the next quarter so chances are forward yield should be higher than 6% but FEHT has a history of trending between the 60s and 67s so we'll see if I can get it back near 60s at some time in the future.

To replace the loss of income from these 2 divestment, I went to add Netlink Trust at 80 cents using the proceeds from the divestment.

Netlink is an interesting business model in my view because the moat looks defensive with the fibre business they are targeting on the Residential and the Non-Residential and how they have forecasted demand on the expansion of the new housing estates in the next few years to come.

The 5G network is always a black box in question and we don’t know yet if associating it with cannibalize the use of the fibre business and how much folks at home will drop fibre in favour of the 5G network.

In terms of pricing, Netlink is being regulated by IMDA using the Regulatory Asset Base (RAB) framework, which allows NLT to recover using the following components: a.) Return of Capital (depreciation) b.) Return on Capital (Interest) and c. ) Operating expenses.

Netlink generated about slightly less than $60m in Cash Flow From Operations each quarter, which translates to about $240m each year. Out of that, the bulk of $40m each quarter comes from the regulatory depreciation while incremental capex is between $18m to $20m. Regulatory depreciation is based upon 25 years of accelerating method for the fibre and 35 years for the ducts and manholes, though management has argued that the actual useful lives can stretch longer than that.

In essence, from a cashflow point of view, they keep investing in the incremental capex each year, and the cashflow and dividends investors get came out of the depreciation as a return of your capital invested. While this concern may seem sound, the fact that the regulatory pricing governs the return on capital means the revenue is protected to give investors sufficient roi yield at the end of the day.

The only worry is if the actual useful lives of the asset goes obsolete faster than the regulated depreciation or because there’s some new technology that they have to invest in the new capex, then the whole cashflow story becomes a concern. But I think this might be a longer concern story in the next 10 years or so once we get closer to that rather than now.

First Reit is a tricky one because first they have the Lippo Karawaci issue due to their Meikarta project and second they have the lease coming up in 2021 on the renewal which brings about uncertainty.

The LK story seems to be a bit overblown because the Group holds sufficiently large amount of assets worldwide that it would be easy for them to either divest or use them as collateral to borrow more debt to smoothen out their cashflow.

The worry is if they'd do what they did to LMIRT by divesting the assets to them at a dilutive yield. Looking at the deal for the Lippo Mall Puri Indah, it appears they are still providing support so the yield is reasonably high enough.

Since they have raised equity rights, and will have enough cashflow to pay their obligations, I think this issue is pretty much closed for now.

The lease renewal that is up in 2021 will continue to be an overhang for now so I'll monitor the situation closer to it by then.

This will be a short term play for now, with monitoring on how the situation might turns out.

At the current price, they are yielding 8.7% which gives a fair risk reward flavor to investors.


The portfolio continued to do well, spurred by the defensive profiles of companies and Reits in the portfolio and also some of the divestment.

This is the 15th consecutive record month that the portfolio has broken a new high.

This is also the first time the portfolio has hit a high of above $900k.

From the first quarter (Q1FY19) returns review, it has so far doing better than the STI benchmark, outperforming it by about 5% in the interim.

This is partly due to the lackluster performance of the STI which has been hovering in the 3200 range since the start of the year. 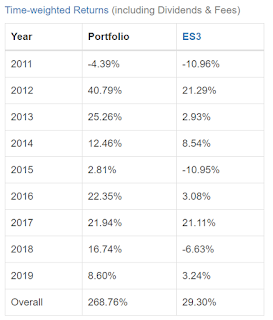 How's your first quarter been so far with the market gyrating along?

Are you expecting any major bull or crash till the end of the year?