Far East Hospitality Trust (FEHT) reported their Q4 FY18 results this morning which shows Gross Revenue coming in 12.4% higher year on year and income for distribution 4.9% higher.
As a result, DPU for the 4th Quarter was up 3.1% year on year from 0.97 cents to 1 cents.
If we annualized the Q4 DPU, we will get 4 cents for the full year, which translates into 6.2% dividend yield.

I was more interested in their operational performance, which is really key to the underlying distribution growth at the end of the day.
They have registered strong operational growth, with four consecutive quarters of year on year growth in their Revpar, creeping up from $136 last year to $144 this year.
Occupancy levels have also increased from 87.5% last year to 89.1% this year. This could be due to the lower supply and higher demand this year contributed by the various event conducted.
I was also pleasantly surprised to see a growth in their service apartments in both the RevPar and occupancy levels. This has been the weak component of FEHT’s portfolio and so it was good to see a growth in it.
Management quoted the overall improvement is attributed to the uplift from major biennial MICE events in 2018, e.g. Singapore Airshow in Feb, and Food & Hotel Asia in Apr. 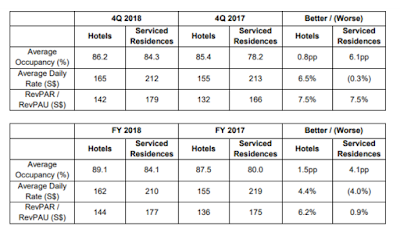 One particular thing that brought my attention was the resume of SCRIP dividend this quarter.

This might signal that they are conserving cash for some acquisition, given that their gearing are already on the 40% level.

I believe the management will also probably take their management fees in unit shares for this quarter.

The last time they allow for SCRIP was back in Sep 2017, and a few months after that they did the Oasia Downtown acquisition, mostly funded with debt at that time.

But there’s only so much debt headroom they can undertake now.

We could be seeing something similar in nature, perhaps increasing the stake to the 30% they already owned for Sentosa Village.

Or I could be overthinking and nothing is in the works.
Perhaps they just need to fund their day to day working capital.
But it’ll be something I want to keep a close lookout on.
Will we see the days when Revpar was peak back in 2012 when hotel’s revpar was at $171 and service apartment’s revpar was at $202?
If the next 5 years will look something like that, then there will be tremendous organic growth in this investment. And from a DDM growth model this share price looks cheap.

Only time will tell.