I recently initiated a new position for Tuan Sing at a share price of 47.5 cents for 40,000 shares.

Tuan Sing caught my eye only recently after the report from UOB came out back in Nov last year, highlighting a few of their solid development and investment properties on hand. Since then, I’ve been studying the company to understand it a little better.

The company has been undervalued for a long while, and it continues to be so until the recent few years when they build up market cap to compete with the rest of the other big boys.

I feel there's a lot of momentum for developer this year, hence I wanted to build a larger exposure apart from the other property play (Ho Bee) I have.

I was looking for a momentum play, company that issued a clear guidance of what's going to come in the next 1 to 2 years, one with a cheaper valuation and laggard play, specifically in terms of low P/RNAV and high ROE – a combination of the two.

High ROE can be due to taking up higher gearing but in a bullish market, leverage can be a tool to expand.

Tuan Sing had also just released their final year results on Friday late night so I thought I'll cover that as well.

Tuan Sing doesn’t possess a brand name that people on the street might hear of, but they are actually a property conglomerate with various development assets in residential, investment and hospitality which spreads across different geographical area – Singapore, Australia and China. Apart from properties, which took up the bulk of their activities, they also held some stakes in SP Corporation, Hypak manufacturer and owns about 45% of Gul technologies as part of the JV.

If you just read their financial statement alone in a single quarter, that's enough to make you dizzy.

It is so extremely difficult to digest the full nature of their business.

The company received recurring income from the hotel operations in Grand Hyatt Melbourne and Hyatt Regency in Perth, which derived about $4m nopat. It is still relatively small proportion compared with the rest of their income.

The company has also planned for an asset enhancement initiatives (AEI) for their hotels in Perth for an extended space so once it is completed we will see some retail spaces beside the hotel.

There is also a revaluation upwards on the Grand Hyatt Melbourne from $335m to $365m this year.

This is not a deal-breaker for me.

This year, the company will complete the 18 Robinson office development at about 3.5% cap rates which will further add to the recurring income portion of the earnings. 18 Robinson is also revalued upwards from $397m to $486m this year, signalling an office demand and compressed cap rates.

This is one catalyst I am watching out for in 2018. This will be their big driver to the income from FY2018 onwards. I think we'll see positive momentum coming out of this similar to Guocoland when they just completed their redevelopment on TPC.

They also bought Sime Darby for $365m earlier in 2017 to develop a commercial center in the vicinity sometime in the future. Sime Darby redevelopment is a long term catalyst but I'm unlikely to be vested till then. Not a big deal breaker for me in the short term.

The company seems to be bullish on the property outlook and they are launching two new projects - Kandis Residence and Remaja Land which will boost their bottomline when they are completed.

This is a mid term play, which by then it will be sold it'll probably be in the profits book by 2020. Again, not a big deal breaker for me right now. The sentiments are going to drive the momentum upwards though.

They also intend to build to build an integrated town resort in Batam in the next 2 years so again it'll be interesting to see when all are completed.

Apart from their property operations, they also own some businesses outside.

Tuan Sing owns 45% stake in Gultech, a PCB manufacturer. Since it's already taken private, it's hard to analyze this one. The company however, gives guidance on the performance of Gultech each quarter.

The company reported that Gultech reported bottomline of around $24m, so at 45% stake, that's roughly about $16m. Still very decent.

The company also owns some 80% of SP Corporation doing commodities trading and Tyres manufacturing. It delivered minimal on this one. 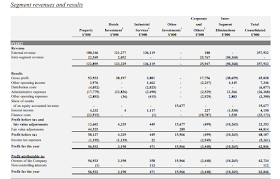 There's almost close to zero chance the company can increase the yield up as their cashflow is tight given their recurring income is still very low.

The most likelihood deal is a special one-off dividend through divestment of their non-core business or through a reits spinoff in the making, but I doubt it will be the focus in the short term.

Until then, investors can forget about this being a yield play.

Comparison with other developers

I quickly draw a comparison among the developers I keep track of.

A couple of them fits the bill from the table below - Tuan Sing, Ho Bee and Guocoland among the others.

Oxley ROE is an outlier as they took on a much higher gearing. The rest are pretty much almost similar in terms of gearing. 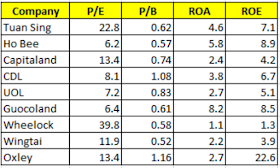 I'm just riding short term on this one with no plans (yet) in sight on the long term.

If we trust the table above, companies with higher ROA and ROE should do well while momentum for developers pick up, but the moment the cycle is bearish, the metrics will go down massively as companies start to hoard their assets and not released it.

My strategy would be safer to go long on a shorter time frame while momentum is still on the way.