Singtel has filed a preliminary prospectus to list one of its associates, Netlink NBN Trust to list on the Singapore Exchange. They were given a deadline by the IMDA to spin off their infrastructure division but still held 24.99% unitholding of the Trust after the offering.

There is a book-building process which will determine the offering price between the range of $0.80 (minimum) to $0.93 (maximum).

The Trust Group’s nationwide network is the foundation of the Next Gen NBN, over which ultra-high-speed internet access is delivered throughout the island of Singapore.

MPA believes that ultra-high-speed fibre broadband has become a necessity and is the foundation of the pyramid to the many services moving into the next Smart-Nation phase.

As the services are undertaken by the RSPs, and not the Trust, competition among the the RSP does not impact the number of connections that the Trust provides. To the extent that the RSP reduces prices because of competitive reasons, it might actually lead to a higher number of fibre connections request from end-users. Either way, the Trust has a monopoly moat in this case.

Currently, the Trust Group’s network is the only fibre network with nationwide residential coverage in Singapore.
As at latest Mar 2017, there were approximately 1.1m residential end-user connections supported by the Trust’s network., which represents 76.3% of all residential premises in Singapore. This is the bulk of where their revenue came from, which made up 61.3% of the overall revenue in 2017. This isn’t the installation portion, so this should be recurring in nature.
MPA projected the fibre subscription to grow at 6.5% over the next 5 years so we should see similar traction of growth too in their topline subsequently. 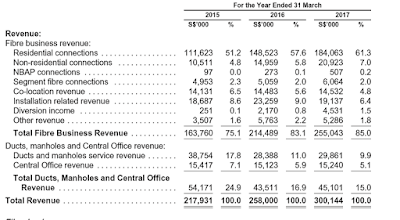 The non-residential connections is currently a small portion of the overall revenue at 7% in 2017, but you can already see the trajectory exponential increase from the past 3 years.
MPA has forecasted a higher growth at 9.9% for this segment over the next 5 years, citing the Trust’s extensive network presence of reaching out to the outside core industries and companies as its competitive advantage.
A big part of the Smart Nation program initiatives is to provide deployment of network sensors and island wide applications such as security devices, surveillance cameras and through the extensive bandwidth network of the Trust, there will be a huge roll-out plan to install the Non-Building Access Points (NBAP) connections by providing similar services to the RSPs which in turn roll-out the HetNet and 5G services to end-users.
The Non-Building Access Points (NBAP) is currently a small percentage of its overall revenue at marginally 0.2%, but this is slated to grow almost double every year at 86.2% CAGR over the next 5 years and possibly beyond.
Financials (Capex)

The nature of such business model usually involves lots of capex requirements.
Consequently, future capex is largely limited to network maintenance (maintenance capex) and network expansion (growth capex) to cover additional residential homes, non-residential homes and NBAP. The good thing about this model being regulated by the IMDA is that they would ensure that pricing wise the Trust is able to generate a satisfactory IRR from the growth capex they are investing in. In the eyes of the shareholders, I think that’s one of a huge unknown factor being taken care of. You don’t usually find deals like that.
A higher portion of the capex will be expected to incur in the next 2 years.

For 2018 and 2019, the forecasted capex is estimated to be at $250m and $86m respectively, which translates to about 112.8% and 25.3% of total revenue respectively.
A large portion of the forecasted capex below is expected to be non-recurring in nature. This includes:
i.) The increase fibre capacity in the network (growth capex);
ii.) The planned acquisition of additional ducts from Singtel (growth capex);
iii.) The expansion of new co-location rooms in Central office (non-growth and admin capex);
iv.) The enhancement of security measures in Central office (non-growth and admin capex);
v.) Implementation of IT Project (non-growth and admin capex)
If I break it down, the growth capex that shareholders are hoping to ride on for their internal returns are at $164m ($142.7m + $51.4m – $30m) and $36m ($5m + $61m – $30m) for 2018 and 2019 respectively.
The non-growth admin portion of the capex are at $46m ($56m – $10m) and $11m ($21m – $10m) for 2018 and 2019 respectively.
Excluding the non-recurring capex, the Trust expects maintenance capex to be in the range of $40m to $60m.
The management intends to fund these capex for 2018 and 2019 through the use of its bank loan facility, thus it is almost certain that we will see gearing goes up much more for the next 2 years until they are able to fund their maintenance capex from the operations cash flow after 2019.

Gearing is expected to increase from the current Debt/EBITDA ratio of 2.3x to 3.0x and 3.2x for 2018 and 2019 financials before getting better.

Revenues is expected to dip in 2018 before growing from 2019 onwards, and with such expected huge capex in 2018, the financials for 2018, whether in terms of earnings, cashflow or balance sheet will all look like crap for them.
EPS is expected to be at an estimated 1.14 cents and 1.70 cents for 2018 and 2019 respectively, which would translate into an earnings yield of only 1.2% (PER 81x) and 1.8% (PER 54.7x).
We can’t exactly use earnings yield to gauge their valuation because depreciation takes up most of the expenses and they are non-cash in nature, so cashflow methodology or gauging them by the Enterprise value methodology would be more appropriate.

Free Cash flow for 2018 will be in the state of horrible, because you have a decreasing revenue and an extremely high capex which will be funded through by a debt facility, but after that, we are looking at a potential decently looking free cash flow for the years beyond. Assuming we take Bruce Greenwald’s theory of using depreciation at 1.5x the maintenance capex, we should be looking at depreciation costs of around $60m to $90m to be added back into the cash flow every year. Hence, assuming there isn’t any growth capex to be taken into account, we could be looking at a FCF of about $55m + $60m – $40m = $75m each year. Based on a loan facility of $507m + $210m = $717m, we could be looking at around 10 years for them to repay all the loans they have on their book.

The market cap depending on the book building exercise will be in the range of $3,091m to $3,594m. Adding debt of $507m + $210m loan facility less cash of $140m, we could be looking at an forward enterprise range of between $3,668m to $4,171m. Assuming forward conservative EBITDA at around $55m + $150m = $205m, this would translate into a forward EV/EBITDA valuation range of between 17.8x to 20.3x. This is not cheap considering the higher range of telcos valuation (for example Singtel) are typically at around 14x, which gives Singtel a good opportunity to cash out in the near term. Other infrastructure trusts such as KIT are valued at 15x and HPH at 18x.

I like the business model and I think it is a no brainer this sort of model would not come in cheap.

Their model is highly regulated and is a barrier to entry for many other smaller competitors so they are almost acting as a monopoly, similar to what Vicom is right now. The good thing about it is IMDA will ensure the company will not lose out on what they have invested in their growth capex so thats a big plus.

Growth potential is evident in my opinion, with the government initiative moving towards a clear path of Smart Nation, and valuation will only get more expensive as it will be re-rated even upwards.

In terms of dividend yield, it provides a decent 5% thereabout for a stable play while riding onto the growth segment of their many focus areas. The only thing shareholders will have to be patience is to ride this out for a few years because the next year results won’t be good and if we add that to a big bear market, we might see investors cashing out in panic mode.

I think it’s a yes for me on this one.