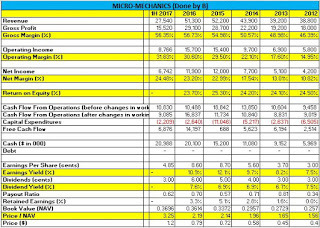 I bought Micro-Mechanics for 15,000 shares at a share price of 86 cents back in Oct 2016 on the thesis of semi-conductor sector rebound and heading back into the upcycle momentum.
The semi-conductor sector is cyclical in nature so it pays off big time if you can predict the bottoming and rebounding of the cycle. The same suffering goes if the prediction is wrong the other way round.
The semi-conductor sector has recently pushed up many of the semi-conductor companies in the local market. Companies like UMS, Global Testing, AEM and Micro-Mechanics have benefited from these “euphoria” in the market. Often, we hear about news coming out from demand from China or US breaking new records, but we are not so sure if this would translates back into demand for the local companies.
For the purpose of this article, I’m going to zoom down into the financial analysis for Micro-Mechanics. If you are interested to read on the company in details, you can google around and you’ll find blog post article from heartlandboy and 10centsperannum which you can familiarize around.
I have to admit that I’ve been lazy these days and have not been researching much into the companies I own or new ideas that came in. With 2 kids and couple of other activities around, my time has diminished than what I have a couple of years ago.
Still, the recent rapid increase in the share price of MM ($1.20 as of writing) has made me wonder if they are overvalued and the action I should take next. So here I am picking myself up and spending a few hours to analyze on its numbers.
If there is anything to take note from the table, it is that the company has been able to improve their productivity on their gross margin and net margins (read the CMA division on what MM does on the financial reports for further details).
Cash has also visibly gone up over the years as the company continues to operate under a sustainable model of paying out dividends from their free cash flow and retaining the rest of the cash for their next growth.
Earnings yield have also gone up by a mile and it is only until recently that it started to go down due to the faster increase in share price as opposed to earnings. Based on TTM earnings, current valuation stands at about 12.5x earnings or around 8.5% earnings yield.
Financial Modeling
I played around with a few of the projections and numbers by putting in a reasonable scenario and extrapolating it for the next 5 years.
2016 numbers are actual while the rest will much depends on the growth factor, g.
The first scenario is having a 7% growth in the first year, followed by 5% growth in the next subsequent years. The reason why I put 7% in the first year is because we have the actual half yearly 2017 results and they are up by 7% (even though some can arguably be said due to exchange gain/loss which is a non-cashflow factor). With semi-con industry on the uptrend, it is not impossible to see such growth cases happening.
To make things easy, I have the depreciation and capex to follow the nature of the growth so cashflow projection can move around easily.
Discounted rate are set at default 10% (sensitivity +-1%) while terminal earnings multiple are set at 11x (sensitivity +-1) which I think is a reasonable for this sort of market cap.
It follows that the intrinsic or fair value for this company will be at $1.39 based on the above few assumption factors.

If we tweak the model slightly to be conservative and amend the growth factor to 7% for the first year and 2% for the following two years and then 0% growth for the next two years, we’d get an intrinsic value of about $1.22, which is at the current range of the share price.

If we want to be slightly more adventurous and project perpetuity growth of 4% for the company using the GG model, then we’d reach an intrinsic value of about $1.42. Do however note, that this sector is cyclical so it’s unlikely we’d see perpetual growth unless it has a first class moat.

Amongst all this, I have of course also not considered the cash they have at hand which they can utilize to acquire some really good M&A which can improve their topline or revenue segment so anything is possible. Though, from the way the company has been increasing their dividends payout to shareholders, it appears unlikely that they will acquire something in the next few years.
Final Thoughts
I’m not usually an optimistic bunch in terms of holding the company for longer term while awaiting for growth to take place. It feels like there’s always something which can goes wrong and I might not be willing to take the risk in terms of risk-reward play, unless the reward is clearly so big.
Micro-Mech will report its Q3 earnings on the 28th Apr.