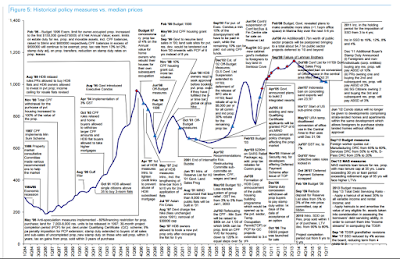 This will be a quick update on the portfolio as I added 3,000 shares of UOL at a price of $7.04.
I added this company right after the cooling measures was announced a couple of days ago, which I believe has brought the sentiments of the market into a different direction. Hence, this purchase was more of a momentum play than anything else.
Whilst the relaxation measures for the seller’s stamp duty and TDSR is unlikely to bring about greater impact to the overall sales for the time being, I think more importantly it signals that the government are acknowledging the difficult times and are prepared to act accordingly to alleviate by adjusting to the measures they have put there in the first place.
We all know that developers have been trading at a discount since the cooling measures were introduced in 2009. So they have been undervalued for a long time. And because developers are not known to be a good payout master, we’ll never know how long we might need to hold these companies if we stay with them.
One of my plan was to get back into developers once the momentum was back up and I thought that this year was a good opportunity to do so.
First, developers are one of the better performers this year as they are already up 16% YTD and you can see that they are inching up off their respective RNAV value, which stands at about 20% discount now.

Second, there is a trend down and reduction in supply over the next few years after a few years of supply glut in recent years which I think will stabilize the market. 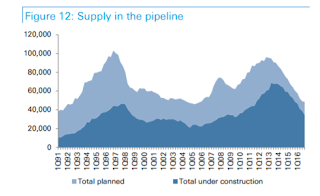 Third, the reason why I chose UOL out of the other developers is because they are more a hybrid towards not just residential alone in Singapore but also towards commercial.
UOL has a high recurring income underpinned from their hotel operations and commercial properties, one of the jewel Novena Square and United Square which will be a medical hub in the near future (Link Here).
They had also recently sold 200 out of the 250 units launched at the Clement Canopy at an average selling price of $1.3k to $1.4k. Looking at those sort of demand, I think we can safely assume that demand is slowly coming back, especially with new home supply going into the other opposite direction.
The interest rate hike will definitely be a knee jerk factor, not only to developers but to all companies that have outstanding debts in their book. Unless we’ll see a faster rate hike than expected, I think the market might have priced this factor in.