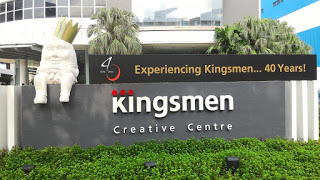 I made my way down today to Changi South lane where Kingsmen HQ was located. It was my first time attending the company’s AGM and getting to know the management personally so it was a very good impression after listening to them speak about the company’s vision towards the future. The management was very shareholder’s friendly as they tried to shake and engage the shareholders before the meeting convenes.
There were also a few familiar faces of friends and fellow bloggers around so I was glad to have met them during the event as well and have a small chat afterwards.
Andrew Cheng, the upcoming new CEO of Kingsmen, started by giving a presentation diving into what they did for 2015 and what is the prospect of clients they managed to clinch or are looking to venture a project with in the future as potential clients. I really like how he presented because for all the other AGMs I attended, the presentation was straight from the financial presentation which was rather dull. But this was different. There was a lot of glimpse sneak peak into the future and strategies the company will be undertaking. He also showed an artist impression of their new HQ (800m away from expo) which will be ready in the second half of 2018. Brilliant presentation.
1.) There was a shareholder who was concerned about the headwinds and outlook of the company going into 2016-2017 and hence he raised this up the management.
The management conceded that the general economy outlook will be tough but that does not mean they will fade away with the slowdown. Contrary, it is often during these periods of uncertainty that the company manage to strive forward and become bigger. For instance, with the retail luxury and fast fashion sector slowing down, the management will not be idle but instead offer clients solutions in alternative marketing that will help boost the experience of the customers, potentially turning traffic into sales and get a better return on every dollar they spent on their marketing with Kingsmen. Even as more retails are going into e-commerce, there will be a segment of customers which will prefer coming into stores and this is where Kingsmen is able to offer in terms of building not just design but also experiential platforms.
The management also offers potential partnership and strategic move into the extended segmentation of retail – such as pop-up stores and airport development (travel retail).
2.) A shareholder raised a question about the cash the company is carrying on their balance sheet and would like to know to which extent does it become excessive at some point.
It is always going to be difficult putting a number or formula to this because where cash is concerned, it is always the more the better as it can work out as a call option that the company can utilize during periods of uncertainty and bargains.
The management responded by clarifying the nature of the industry and work they are in puts them in a situation where they will need cash to tender for the project and buffer for working capital as and when required.
In addition, the company has a total of 19 offices in different locations and each geographical areas will offer opportunities in the different segments and hence it is crucial that the cash be kept in the books of each of the entity in case an opportunity arise.
Apart from it, the company would also require cash to build their upcoming HQ which will commence anytime now until 2018. The construction work alone would require approximately $20m  to $30m spanning over 2 years.
The management do however agree that should they feel there are excess cash at the end of the day, they would return to shareholders in the form of higher dividends, but the likelihood should be low because there will always be business and opportunities for the company to grow.
3.) There was a shareholder who asked regarding the longer term outlook of the company.
The management responded by saying that ideally they would like to see topline growth to double in the next 6 to 8 years, which is highly possible given the opportunities the market is offering.
4.) Another shareholder asked about how they designed theme park as several of them, e.g Universal Studio, Legoland, Disneyland has their own preferred design that they would like to have.
The management replied by confirming that theme parks usually have their own IP concept in mind that they’d like to build, but they are often looking for vendors who can offer good reliability in execution, design and built with attention to details and the choice is often clear who has the expertise to do so in such a niche market.
5.) The same shareholder asked about whether the company taps on the association the Board might have on Singapore related, e.g Capitaland or CDL has hotels business.
At the moment, the company is not looking into these segments so it is not under their radar. Having said that, airport development such as the new Jewel @ Changi Airport are those they are looking out for which was just completed last week.
Overall, it was a good session and this is my first time attending the company’s meeting in their HQ.
I think with the management’s honest take on their strategies and their assurance, I will look forward to the growing business and confident the management’s ability to bring them to greater heights in the future.
Vested with 80,000 shares as of writing.