Keppel Corp has once been a darling blue chip for investors.
However, the recent news regarding oil glut has sent many O&G companies like Keppel and SembCorp down the spiral, so fast to the point that they were constantly dropping almost 5% to 7% every day until they form a new low. The stock close last at $5.15 today. 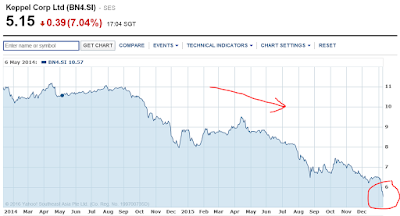 There were plenty of discussions amongst my chatgroup of friends who were either hesitant to cut loss for those who are vested and those who are going long for those who are currently not vested. Since I have some data on hand, perhaps I could share with the majority of the people who are interested as well.
Keppel Corp is a conglomerate and it is never easy to value a company with different core businesses at hand. We may come up with different methods of valuing their respective businesses but they can only be estimates at best. Well, even the analysts who were once taunting $15 target price for the company has now changed their tune and target to $5. Anything can happen when such black swan event hits you.
There has recently been a couple of news circling around whether Sete Brasil would go under. Since Keppel has vested business interest with them, the company would be directly affected if they go down and unable to settle their obligation.
So what I am going to do here is to do a reverse backward calculation from their NAV/share (Note: The easiest to value Keppel right now is probably based on their book value) and then subsequently do a various possible scenarios where some of these rigs are cancelled and the company would have to take in impairments and/or reversal to their profits which have been previously recognized. They are not the closest but I think it gives us an indication.
Keppel’s current NAV is at $5.91.
Keppel’s Rigs Order Book
The table we see below was an excerpt I extracted out from the CIMB website for us to understand more about these rigs order books and impact on cancellation. The last column on the right would most probably be what I am interested in since it is a direct impact to the EBIT, so we’ll use that as a base for impairments or earnings reversal.
There are 6 Sete Brasil / Petrobas rigs order totalling $6.2 billions worth of contract, upon which Keppel has recognized $2.6 billion on their book. These amounts have also been collected since Sete Brasil has been paying until late Nov 2014. This means that if we are assuming a worst case scenario where either Sete Brasil goes under or none of the restover rigs are going to be delivered, and we take in the assumption of 6% EBIT margin on the rigs, the impact to the EBIT would be $3.6 billions ($6.2b – $2.6b) x 6% = $216 millions. This translates into an earnings per share of $0.118.
Now, if we take some of the other B class rigs ordered by different customers, we might have a different case because some of these may be cancelled while others may be deferred. If we want to be ultra conservative and take in hits for all these rigs cancellation, the impact would be $988 millions. This translates into an earnings per share of $0.543.
There are some other FPSO and OSV orders for future deliveries which CIMB thought was a low risk deferral / cancellation case, so they have not been included in the computation. However, if we are again to take a conservative approach by considering cancellation of all these orders, and assuming an EBIT margin of 15%, we would see an EBIT impact of $3.588 billions x 15% = $538 millions. This translates into an earnings per share of $0.295.
In short, if we are taking these earnings out in total based on the above scenario, we would end up seeing Keppel NAV reduced to $5.91 – $0.118 – $0.543 – $0.295 = $4.95. I think this is pretty short term conservative, so I’ll probably think they are a good amount to enter at this point. But please do your own due diligence on the matter. 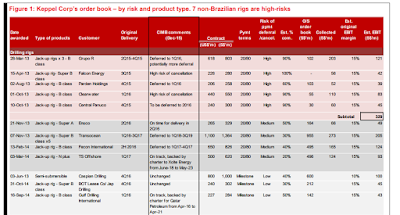 Please note that the above calculation is for existing order books and it does not include potential future impairments or impacts to other earnings. If the prospect of oil is bad, you can be sure that there will be more domino effects coming and this could affect the company business even worse.
The question on everyone’s mind is probably on whether O&G has a prospect in the future. Things are never easy when we are in the state we are currently in and are only clear upon hindsight. If you are unsure about the industry, my advice is to avoid touching on these industries at all, even though it may seem really cool on the outside to be a contrarian at this point. After all, you are playing with your own money, so take responsibility for it.

20 thoughts on “Keppel Corp – Are There Hope At The End of The Tunnel?”