The last time I have anything to do with Sembcorp Industries (SCI) was when I divested the shares last year back in April 2015 at a price of $4.84 (Link Here). Back then, my main concern was their increasing debt (consolidated) and weakening in their utilities function, along with the relatively fair (not cheap) valuation at about 10.8x PER and EV/EBITDA of 7.9x. I didn’t predict that oil price would come to such level we’ve seen today back then.

How fast things have changed today. With the recent news of a major oil crisis, SCI has been dropping furiously and its share price has been languishing at around $2.46 at the moment, almost half from what it is a year ago. Pretty crazy.
Some readers have requested me to go through SCI like what I did with Keppel previously. I am not going to go through each and everything specifically so I’ll just quickly run the important numbers. 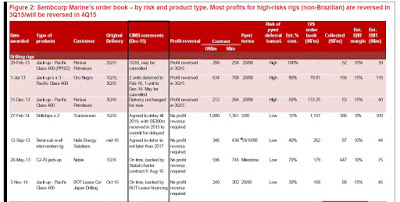 The outstanding order book for SMM is slightly higher than Keppel, and since SMM operates mostly based on these as their core earnings, they would have been more badly impacted than Keppel. SCI is less impacted because it has its utilities and infrastructure business to buffer.
Based on CIMB estimates, the risk for cancellation of Sete Brasil / Petrobas is about $5 billion revenue and if we take in 6% EBIT margin assumption, it’ll work out to be about $450m EBIT impacted to the downside. This translates to about $0.215 based on earnings.
Then, there are also the other Jack-up orders which had a higher probability of being cancelled/deferred. This totalled up to about $470m EBIT impact for this segment. This translates to about $0.225 based on earnings.
Finally,
t
here are also the recent ongoing litigation involving Marco Polo where they most probably had to reversed their earnings. These impacted to about $41m EBIT earnings or $0.0196 based on earnings.
Shares of SMM are languishing at around $1.4 at the moment, so we can do the calculation from there.
The company has also issued a profit warning guidance in Q4 later, so we certainly know that it’s probably not a good idea to add anything until they announced their full year results.
Looking at it from another angle
What about trying to look at SCI from a different angle?
Since SCI owns 61% stake of SMM in their books, and taking today’s closing price of SMM at $1.37, this would translate to about $0.98 in SCI book after adjusting for their respective no. of shares.
Now, if we take SCI closing price today to be at $2.46, it means that their utilities and other infrastructure function would be worth $1.48 ($2.46 – $0.98).
The other infrastructure function’s book value is about $0.30, so we can take that their utilities segment is being valued at $1.18 ($1.48 – $0.3) at the moment.
The big question now is if Mr. market is discounting too much SCI at the moment, not factoring the potential growth of their utilities. Should we then, as contrarian investors, pounce on this opportunity?
Well, we’ll never know because we don’t know how much more is SMM going to fall, so the best bet if we want to be conservative is to price them at $0 value. This means that for as long as we are convinced that the utilities segment is worth at least $2.46, then we should be happy to be buying more.
We know that their utilities segment is very strong on overseas growth and are somewhat muted in local due to higher competition cited. The question is now on whether we can continue to see growth coming out from the utilities and if so how much should they grow to justify the $2.46 worth. 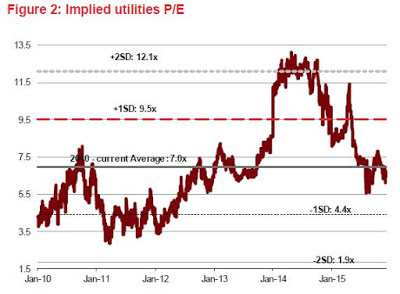 Using a reverse engineering methodology based on 5 years DCF model on FY14 earnings, with a WACC of 6%:

– $2.50 worth would mean that the utilities segment needs to have a long term terminal growth rate of 3.2%.

The company has increasing debts that are way more than previous years so there is also a concern that they might need to call for rights issue to raise cash. However, looking at their current EV/EBITDA of 6.75x, it does look decent and better than when I sold them a year ago (EV/EBITDA = 7.9X).

I should be looking to enter at some point but am currently waiting for their final results to be announced on 17 Feb. By then, I hope the market continues to discount them, and I’ll gladly pick them up at a much lower price later on.

235 thoughts on “How Much Should Sembcorp Industries Be Worth?‏”