Following the recently announced Q3 results which I have touched on my previous post, I sent an email to their Investor Relations Group to better understand their competitive challenges in the Utilities and Power segment of the business. Just thought I could share their reply for the benefits of those vested or interested in the company.

We understand that the management has cited intensified competition on its Energy and Power segment for the Singapore market which is causing a drag on their earnings, so I asked regarding some of the competitors profile, business moats and how Sembcorp has fared against these competitors in the Singapore market.
You might recall seeing this graph overview on my previous post which I will attach it again for our easy reference. 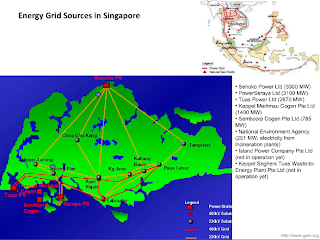 Competitive Advantage in the midst of challenges

Based on their IR’s reply, the competitors in the power generation market in Singapore include the 3 big gencos (Senoko, Power Seraya and Tuas Power), Keppel and PacificLight (formerly known as GMR). As we already know, the 3 big gencos have a much bigger capacity with Senoko (3,300 mw), Power Seraya (3,100 mw) and Tuas Power (2,670 mw) and they have been the dominant gencos in the Singapore’s power industry. The new capacity additions by Sembcorp, Keppel and PacificLight has increased supply, but somewhat decreased the 3 big genco’s share of the total generation capacity. Currently, there are more supply than demand in the market, which has intensified competition and brought power prices down (this has been elaborated in my previous post as well).

Unlike most of the competitors, Sembcorp’s main competitive advantage is that their plants are cogeneration plants which produce both power and steam – a dual products that give them dual income (SCI sells power to the grid and steam to industrial customers on Jurong Island). In contrast, powerplants that are owned by the other gencos only produce power – a single product.

In addition, the construction cost of SCI’s plant is cheaper than the privatised value of the competitors, which makes SCI one of the lowest cost producer of power in Singapore. They further stressed that Singapore’s power market is a merchant market where every gencos are faced with similar prices for their power output. The cost base for SCI is lower, hence they have an advantage in taking margins higher than the competitors.
China weaker performance 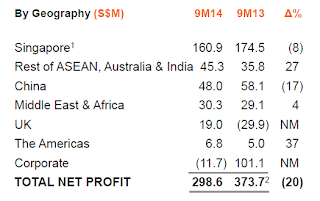 I also asked regarding some concerns about declining geographical segment in China in their recent Q3 results, given that they will be extending their pipeline project even more so in the next couple of years.

The IR cited the main reason for the weaker China performance in Q3 is due to the lower wind factor from their wind farms.
They stressed that China remains an important market and SCI is extending not only in terms of their new projects but also streamlining the execution of their operations. Fundamentally, they believe that there are growth opportunities in China, particularly with the government’s strong emphasis on environmental protection. This will spur demand for solutions such as industrial wastewater treatment, water reclamation, renewable power, etc – solutions which SCI have strong capabilities and a good track record in providing.
I understand that there are a couple of fellow bloggers who have now been onboard with SCI. The stock has rebounded a little bit since we last see its price fell to $4.55. Take the reply from the IR with a pinch of salt as a piece of information rather than looking at it at face judgment.

I hope the updates will be useful for you to make your further decision on whether you should buy more, hold or sell.