The recent price decline in Vicom has caught my attention. It has fallen from a high of $6.60 to a recent $5.85 and I received queries from a reader whether the stock is a buy at this price. I told the reader who emailed me that I do not give a recommendation, but can provide an analysis of where I think the company’s outlook is heading right now.

I have made two posts this year in relation to Vicom. The first one was on 12th February 2014 while the second was on 11th May 2014. You may refer to my previous posts should you be interested.
http://foreverfinancialfreedom.blogspot.sg/2014/02/vicom-steady-results-for-fy13-outlook.html
http://foreverfinancialfreedom.blogspot.sg/2014/05/vicom-is-special-dividend-going-to.html
It has now been almost 5 months since I’ve last written an analysis on the company. So let’s see what updates there are since. I would probably not touch too much on its financials as they can be easily attainable from the annual report. In short, the company has a pretty decent run up to its EPS over the past couple of years and is hoarding a huge amount of cash in their balance sheet. Dividends have thus increased as a result, but a couple of investors have raised question on whether they are sustainable.
There are two main segmentation on Vicom’s business – testing and non-testing services but for the purpose of the research, I will focus on the vehicle testing and inspection services.
No. of Vehicle Inspection (by LTA)
Based on the latest 2013 annual report, we know that the number of vehicle testing from Vicom amounted to 518,943 while LTA figures came up to 697,870. This gives Vicom a 74.3% market share (519,943 / 697,870) for its vehicle testing service. If we were to take a conservative 0.5% growth in the estimated number of vehicle inspection by LTA in 2014, we would come up to a figure of 701,359 – this would translate accordingly to 521,537 vehicles for Vicom using the above computed market share.
One common trend from the above table is that the growth rate has been increasing at a decreasing rate. This is not surprising given that the LTA has previously mentioned that the growth rate will be set at 0.5% per annum from February 2013 to January 2015. The interesting news for this is that given the current quantum expiring in Jan 2015, it should be anytime soon that they will announce their plans for the next 3 years. This will have a huge impact on the outlook for Vicom.
No. of Vehicles De-registered
On 13th Jan 2014, the LTA released a statement stating the general rising trend of vehicle de-registering and this trend will continue for the next foreseeable future until 2016 (will elaborate later). If we see from the data below from Jan to Aug 14, the number of vehicles de-registering has been at an all-time high and has averaged at about 4,493 vehicles a month. This will have an impact on Vicom’s inspection and testing business as they depend highly on the number of vehicles that is sent for repair and inspection. 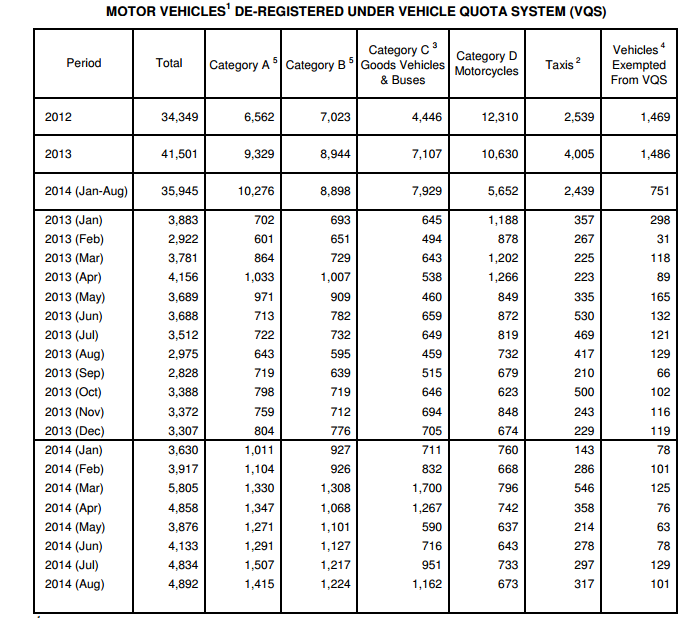 Ageing Distribution of Vehicles
Some investors have raised concerns regarding the increasing number of de-registration of vehicles in recent months and they are valid concerns. But to me, this is nothing more than just a cyclical cycle which we know will be coming.
The increasing recent number of vehicles that is de-registered can be attributed to the ageing distribution of these vehicles. A look at the data below and you can see that most vehicles have an ageing distribution of between 6-9 years, which means that they are likely at the upper trend of de-registering period. If we look between 2004 to 2006, the number of vehicles that is de-registered reached the above 100,000 mark and you can see how this affects the company quite adversely at that point. Hopefully, this time they would be able to avoid a repeat of the incident given the high COE quota prices (discussed later). 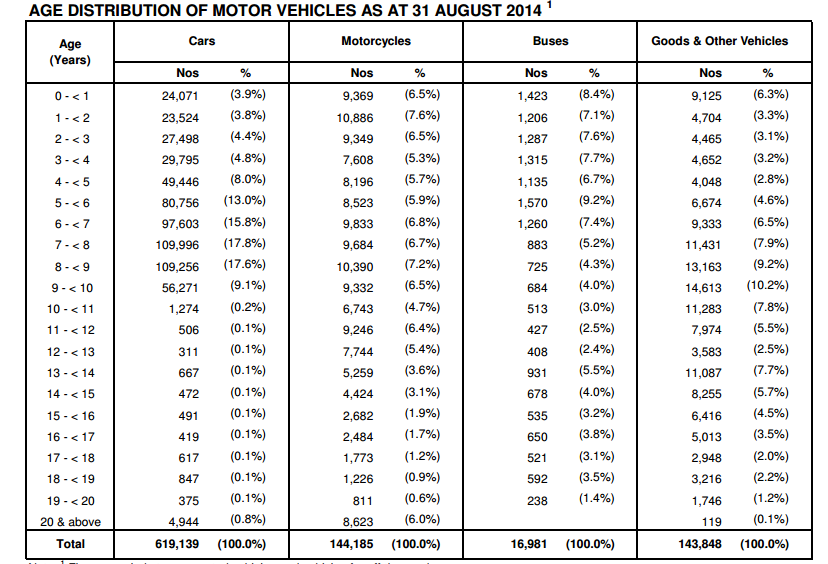 COE Quotas and Prices
Certificate of Entitlement (COE) quotas are trending upwards in the second half of 2014 given the increasing number of vehicles that are de-registered in recent months. Despite that, COE prices for all vehicle categories rise due to strong demand and this may bode well for Vicom.

Although COE Quotas have risen and car buyers are looking to replace their old cars, the high COE prices means that vehicle owners are holding off their deregistration due to the high cost of purchasing a new car, and opting instead to extend their COEs for a further 5 years. This can also be seen from the contracting sales figure of new cars, indicating that car owners are likely to extend rather than buy. 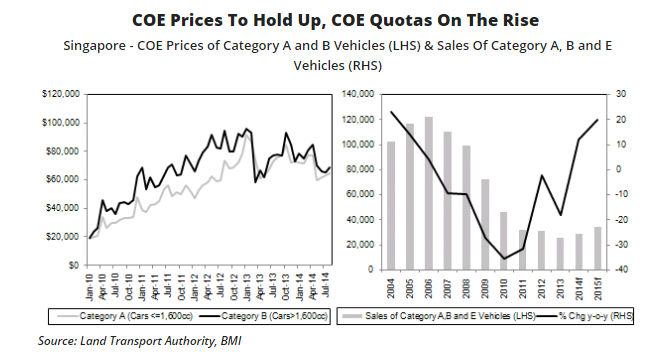 This could very well be what Vicom needs. Instead of having a huge number of vehicles getting deregistered at the same time like what happened back in 2004-2006, the number of vehicles deregistered could be spread over a couple of years, giving the company a breathe time to adjust. The extension beyond the 10 years would also mean that the testing and inspection for the vehicles need to be done annually (after 10 years) instead of biennially (3-10 years), which means that the frequency of vehicles sent to Vicom could increase.
Conclusion

There are certain worries that is evident in the public and private transport in the sense that the company is highly reliant on the policies of what the government and LTA decides. But a number of factors could play out in favor of Vicom at the end of the day depending on how the management works out the strategy. Remember that even during the GFC, the management has handled the situation very well and returns good value for shareholders.
If you are an investor that are looking out to buy the stock, get an idea of how the policies might play out in the next couple of years for Vicom. The share is currently trading at a multiple of 17.6x, which is higher than the historical 10 year average of 12.2x. The current price yields a dividend of 3.8%.


What do you think of the company? Are they undervalued/overvalued at current price? Can the dividends be sustained?

14 thoughts on “Vicom – Looking Ahead and Beyond”